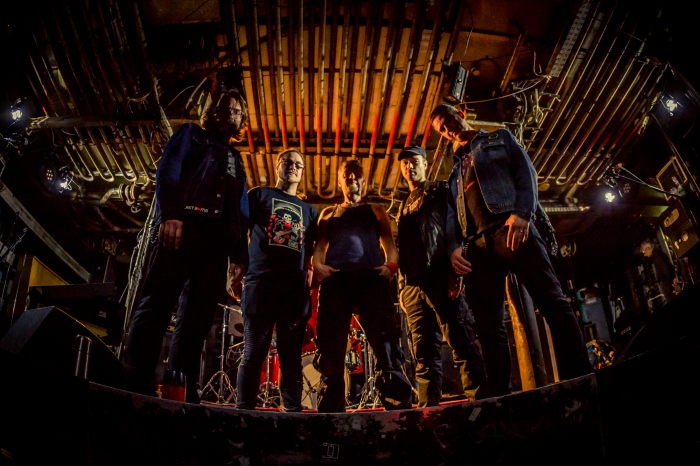 There is a new uncompromising bruiser in town and it goes by the name of Blast Bomb. The first week of December sees the Hamburg outfit release their debut single Born To Lose; three tracks of rousing feral  punk ‘n’ roll that take no prisoners whilst stirring up defiance fuelled, attitude loaded involvement.

Blast Bomb rose up earlier this year from the presumable demise of underground bands High Gain District and Skull Harvest. Its line-up was subsequently completed by ex-Thirteen Shots vocalist and founder of independent label Undead Artists, Johnny Rose. Having moved to Hamburg from his native Birmingham in the UK, Johnny has introduced a host of great garage and horror punk bands to new ears though his label but it would not be too wrong to say that his old band has been missed by a great many so anticipation for this first Blast Bomb encounter is broad and eager. Listening to it, it almost feels like a match destined to be, Johnny’s untamed but fiercely magnetic tones an instinctive union with the sounds unleashed by guitarists Torben and Klaus, bassist Kai, and drummer Tobi.

Since emerging, Blast Bomb has earned strong support and plaudits through supporting Honeymoon Disease, Conan, and Monolord. We called their sound feral punk ‘n’ roll but it is easy to understand how they went down well with the audiences at those band’s shows as it has a definite dark stoner/sludge punk essence to its uncompromising but infectious trespass. Released through Italian label Archetype Records, Born To Lose is ripe with this voracious sound and is sure to nudge the European rock scene to their presence.

The single opens with its title track, a sonic wire drawing in the combined thrust of vocals and sound with rhythms directing the charge with their own creative agitation. It is a riot in the ears though imposing but one composed and direct in its targets as hooks and riffs crowd the great earthy moan of the bass. Group participation further ignites the anthemic rock ‘n’ roll of the chorus while tendrils of fiery guitar intensify the heat even if not hanging around long enough for personal pleasure. Like a dirtier punk Johnny Thunders and The Heartbreakers, band and track has the body bouncing and middle finger quivering as it gets things off to a great start.

As potent as it is, these ears took to its companions even more eagerly, You’re Going Down being first up. Its initial melodic hook is instantly a greed poking lure, even more so when an additional groove of guitar and the moody grumble of the bass join in. Once hitting its antagonistic stride, the track uncages a grungier hue to its bracing and abrasive roar proceeding to holler and blaze with creative irritability around a virulent web of hooks.

Born To Lose is released December 6th via Archetype Records.