As much as talent and craft helps a band step out from the crowd having a sound with distinct character to it is just as potent a weapon. On the evidence of their new EP, UK alternative rock trio Saltlake has found that key. It may not have true uniqueness yet but there is no escaping a captivating prowess and enterprise which commands attention.

One of the first things the Medicate Me EP hooks ears with is the depth and expanse of its sound, a soundscape of electronic and electric drama which belies the slim number of the band’s personnel. It comes drenched in emotional intensity and a hungry energy which again only adds to its potency. Consisting of vocalist/guitarist Henry Gottelier, bassist Liam Quinn, and drummer John Godly, Saltlake emerged from within the Sussex countryside and London suburbs in 2013. Medicate Me is our introduction to the band and takes short time in sparking an appetite to hear more. 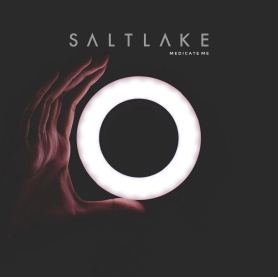 The following Sympathy Apathy entices initially in a similar way to its predecessor if with less of an imposing trespass. It too casts a dramatic tapestry of sound swiftly upon ears, melodic suggestion wearing an early U2-esque hue to whet the appetite before Saltlake weaves their own individual theatre of sound and adventure. As with the first, there is a mix of the familiar and the fresh entwined to catch the imagination; creating a song which mixes unpredictable and recognisable flavours to push the release to another level.

Hourglass simmers and erupts next with melodic persuasion and emotive intensity, vocals as reflective as keys and guitars against the more formidable touch of rhythms. It is a track which just blossoms from moment to moment and listen to listen. The drama of synths and melody are matched by the prowess of voice and creative imagination fuelling a song where though there is something familiar nagging away with one of its key hooks, though still to be exposed in realisation as to why, it soon steals the limelight within Medicate Me.

The EP closes with its title track, a proposal rising from an electronic mist around a dark bass throb into an atmospheric heart bred croon prone to more volatile, ear grabbing cries of emotion and intensity. Even with its thick haunting air the song is as catchy as anything before it and brings things to a highly enjoyable conclusion.

As suggested, Medicate Me is a mix of the familiar and individual which increasingly impresses over time from a band which is heading the right way towards real attention.

Medicate Me is available through all stores now.

Having recently chatted to The Emergency Please founder and vocalist/guitarist Karan Master (ex A Gentleman’s Film) about his band and debut release, it was only right we also leapt into the Remember You EP from the UK outfit. Released a handful of days ago, the four track encounter is a spirited stroll of pop punk and funk infused alternative rock which needs little effort to have the body and imagination swinging.

Inspired by a varied host of artists headed by Jimi Hendrix, John Mayer, and The Smashing Pumpkins, Master has linked up with bassist Michael Hartley and drummer Sam Garnett to complete The Emergency Please line-up though Remember You was recorded with the aid of Sam West (drums) and Adam Porter (bass). Southampton based, the band has a sound which is maybe still in the brewing stages but as their first EP shows, it is already a flavoursome proposition with rich stock for future adventurous recipes.

Remember You opens with its title track, a magnetic affair bursting from an initial guitar jangle with energy and spirit in sound and vocals. Boisterous beats punctuate the melodic web cast by the guitar, the bass more moody but no less keen an ingredient in a song which second by second gets under the skin. A little folk pop, plenty indie rock with a pop punk lining, it captivates from start to finish, alluring ears and hips with equal dexterity.

The following I Can’t Stop is just as energetic and eager to tempt with funk infused hooks and a rhythmic shuffle which just swings along. Speeding up its lures at certain times, it is a great nag on the appetite with more controlled moments providing a tapestry of creative suggestion. Put all together it provides a shuffle which is as bold as it is accomplished, matching the heights of its predecessor to keep the release holding rich attention before Lost casts its calmer, melodically intimate caress on the senses. Melancholic but with heart felt light to its touch, the track provides its own captivation to complement its previous companions.

The EP closes with Clark Kent Syndrome, a song which begins with a mouth-watering temptation of guitar string picking and proceeds to seduce with rhythmic bait led by the pulsating yearning of the bass. With vocals as potent as ever, it continues to dance on the ear though it does not quite live up to its early promise for personal tastes. Nevertheless it is a thickly pleasing end to a release which grows and persuades with increasing prowess, its closing expulsions of vocal angst against the funk woven shuffle of the guitar epitomising its appeal.

Remember You is an introduction which makes you take notice; a strong first step from a band with plenty to discover in their imagination and on the evidence of the EP, plenty of tenacity and craft to bring it to our anticipating ears.

Remember You is available now @ https://theemergencyplease.bandcamp.com/album/remember-you