The final few words on the press release for Prism, the debut album from Swiss metallers Kill The Unicorn declares that they “are a band to get excited about!” Greedily listening to the eleven track web of sound and intrigue yet one more time to continue concentrated attention it really is impossible to disagree.

Launching from a bed of metalcore ferocity, the album is a kaleidoscope of trespass and suggestion embracing everything from hardcore to groove metal and progressive to post metal whilst fusing an array of funky and jazzy bred psychosis with some classic 8-bit sound mischief. The result is a release which devours and seduces with violence and unpredictability like a deranged dervish; one which is a little unhinged, slightly uncontrolled, and persistently sending ears and imagination to lustful places.

Hailing from Lucerne, Kill The Unicorn emerged in 2014 and took little time in stirring up attention through their live presence which has subsequently seen them share stages with the likes of Promethee, Ghost Iris, Vola, Science of Sleep, Walking Dead on Broadway, Voice of Ruin and many more. 2015 saw the release of a three track demo, an encounter laying the seeds and hints of things to come; the joys and intrigues to be now heard and explored within Prism. 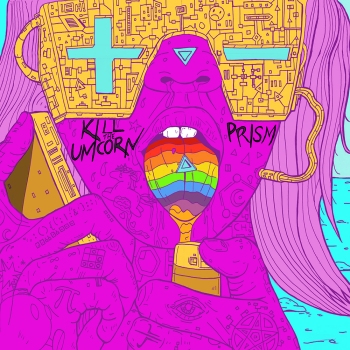 Recorded with producer Aljoscha Sieg (Nasty, Eskimo Callboy, Vitja), Prism hits the ground running with opener Motoko Kusanagi. As the guitar joins an initial 8-bit fingering, a tempest gathers behind, swiftly unleashing its voracious force as rhythms fly and riffs bite. Vocalist Pipo Thalmann is quickly there in the midst growling as a delicious hook and similarly tasty grooves entwine the aggression before the already intensive beats of drummer Matteo Leuthold raise their rabidity and pummel the senses. Already a fusion of metal is at fevered play, expectations are taken to the cleaners by the subsequent twists and turns though the band has still yet to dip into their boldest enterprise hindsight revels. The track is pure bait with the guitars of Ziggy Lebon and Raphael Zumstein as predatory as they are creative conjurors.

The vocal dexterity already suggested within the opener is pushed again within its proper successor, Ode To Spot. Unleashed after the Sinclair-esque loading of Dreams In 56k, riffs and rhythms sink their claws and teeth into eager flesh, the track savaging and gnawing the listener before suddenly turning on its head with a funk/progressive shuffle. Thalmann mixes his throat scuffed squalls with clean vocal and similarly off-kilter expression to match the sounds twisting around him; all the time the bass of Marc Sommerhalder grumbling with bestial discord though eventually even it has to join the swing before a death nurtured storm descends. Like Horse The Band in league with Pryapisme and Cryptopsy, the track consumes the senses before Wormhole To Gliese 556c voraciously infests the psyche with extreme metal hunger and corrosive adventure. Though it never truly deviates from its rapacious remit, the track is just as gripping as its predecessor and unafraid to follow where its instincts wander.

F.U.C.K.U.P. equally has a carnal heart but is soon wrapping its core in System Of A Down like mania and Hardcore Anal Hydrogen similar eccentricity, continually twisting and turning sound, imagination, and the listener alike. There is an early Korn like air to the carnivorous moments before primal outbreak too; adding to a tapestry of unpredictability which hits the spot relentlessly before the progressive beauty and stroll of Me And My Velociraptor invades the imagination with its compelling instrumental. Rousingly and hauntingly infectious, the piece has the body and pleasure bouncing ready for the invasive tone and touch of Conquistador and its tide of punk and metal hostility again impressively steered by the guitars and the vocal prowess of Thalmann. Tightening its grip by the second, the track flings the senses around like a rag doll yet seduces them with nuances and bold turns within its inhospitable consumption.

Through the punishing depths of Catacombs with its maze of sinister deviations and the senses stalking blackened incursion of Ausgefuchst, the album simply reinforces its dexterous invention and uncompromising extreme metal voracity though both tracks have to give way to the even more contentious siege of the senses uncaged by Rendesvouz with Cleopatra. Malevolence drips from every note and syllable here yet equally the band’s untethered imagination soaks every trespassing breath if without revealing the hungry boldness of earlier tracks.

The album ends with Pitch Black VR, a rancorous, skilfully woven and delivered savaging compounding the animosity and inventive craft of Prism with might and boisterousness not forgetting imaginative zeal. It is an unforgiving, mouth-watering conclusion to an album which certainly lit our fires and as that press release suggested it might, our excitement.

Prism is out now and available @ https://killtheunicorn.bandcamp.com/album/prism