If previous single, Magnificent, was not enough to tease sure anticipation for their upcoming debut album, British indie outfit Speak, Brother seals the deal with its striking successor. As the last single lived up to its name in sound and presence so Lions Roar backs its moniker with a temptation which vociferates with power and gusto as a melodic mane swings.

Emerging from Rugby in 2011, Speak, Brother has proceeded to stir real attention their way with a couple of EPs and tracks which immersed ears and imagination in ethereal yet forceful persuasion. Such the rising support of the band, their forthcoming album, Young & Brave set for release early 2018, has been a crowd-funding success with thick anticipation awaiting its arrival. Songs like Lions Roar are the reason why, tracks which ripple with creative drama and an emotional tension yet seduce and beguile with indie rock energy and adventure.

The quintet of James Herring, Matthew Cotterill, Nathan Morris, Dan Smith, and Sam Oakes bring the track into view on a swift melodic breeze, its breath bearing boisterously rousing rhythms courted by the melodic grace of the piano. They swiftly align with the ever impressing tones of Herring, his voice as the music rich in commanding expression and weighty enterprise.

Strings join keys in further captivating an imagination already caught in the instinctive lure of the song, its moments of reflective calm as compelling as the lustful crescendos which surge with relish through ears with anthemic tenacity.

The track is immense, even in the final few seconds of its finale, a rousing and almost spiritual incitement which with its predecessor ensures that Young & Brave just cannot come soon enough. Indeed if both singles are the evidence of things to come, we just might be looking at a game changing treat for the UK indie scene.

Lions Roar is out now with Young & Brave set to be released in Spring 2018. 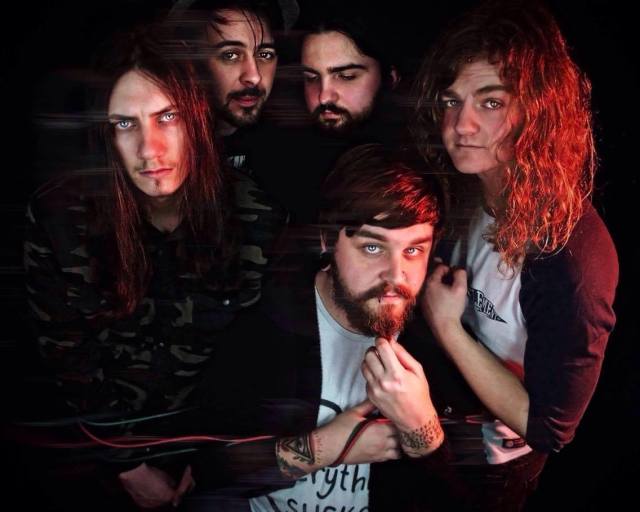 UK band Bad Llama emerged early last year and swiftly poked eager attention with the release of first EP Shedding Skin and its lead single The Wolf You Feed from fans and media alike. Now ahead of their upcoming follow-up EP, Crooked Empire, the Burton upon Trent quintet ups the ante with the release’s first track, Apocrypha.

It is a powerful and rousing encounter which demands attention whilst revealing a new maturity and intensity in the band’s multi-flavoured sound. A list of Bad Llama’s inspirations reveals an eclectic mix ranging from Red Hot Chili Peppers, Incubus, and Tool to Korn, Faith No More, Rage Against The Machine and Bring Me the Horizon; a mix equalled in the metal and heavy rock bred enterprise of a sound also bearing the spices of progressive and industrial nurturing. As previous releases suggested, what emerges is a sound distinct and becoming more unique to the band; Apocrypha another definite potent step towards that originality. Recorded with producer Gavin Monaghan, Apocrypha moves in on ears with an almost predacious atmosphere and similarly swinging beats, its threat dissipating slightly as Kyle Jordan’s expressive tones step into the web of suggestion cast by the guitars of Dan Houlbrooke and Sam Wyatt. The gnarly snarling bass of Lewis Hutchings though keeps the intimidation flowing; a delicious texture prowling the sonic temptation continuing to entangle the imagination of song and listener as Gaz Waddell’s beats bite.

It is a captivating mix in a song which grows and blossoms in thought and enterprise with every passing second. Apocrypha is a masterful proposition, skilfully crafted and emotionally intense which it is hard to see not stoking up attention for Bad llama and anticipation for that forthcoming EP.