a blue flame – when your whole world turns to dust 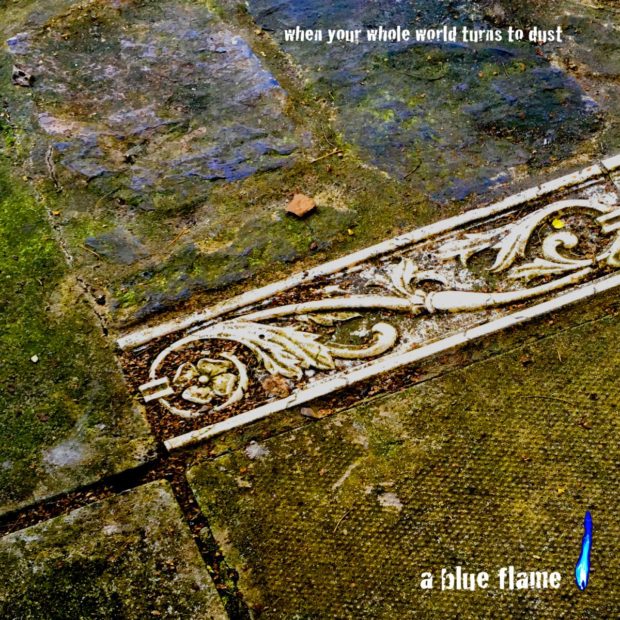 Last year ears and acclaim were seriously caught up in the swinging rock pop adventures of What We’ve Become Is All That Now Remains, now a blue flame follow up its success with when your whole world turns to dust, a release which may be takes a touch longer to spark the same kind of reactions but gets there all the same.

a blue flame is the solo project of Leicester based songwriter Richard Stone and when your whole world turns to dust his third album with the first, someone else’s dreams will fill our home released in 2013 as Woodman Stone.  For his new offering Stone has ventured down the gentler melodic side of his previous album but managed to find the same eclectic flavours which marked out its praise collecting presence.  Essences of folk, swing, and cabaret peak out within when your whole world turns to dust. There are moments when it rocks with full eagerness but generally it basks in a mellower climate yet the same instinctive infectiousness which drove its predecessor again infests the new album whether tempting with an emotive croon or a spirited roar.

With a host of skilled musicians such as Andy Robertson, Adam Ellis, Damon Claridge, and Tony Robinson alongside the vocals and guitar of Stone, the album opens with Back to the Stars and immediately has the body moving to its slow sway and smouldering jazzy hug. The dark inviting prowl of the bass is courted by the seductive flames of brass, both suggestively skirting the magnetic tones of Stone. It is pure captivation setting the release off in fine style.

The following We Feel Like We Feel brings a 60’s pop scent to its melodic surf twanged breeze, a touch of The Everlys flirting with its Bit pop suggestiveness. It is a mix of essences then emulated with different flavourings within the excellent Don’t Wait where it is hard not to be reminded of The Divine Comedy, its English heart and infectious canter a tapestry of imagination and creative zeal.

A Mariachi scented Latin lure graces the show tune-esque rapture of the outstanding 21st Century Blues, a song which almost creeps up on you with its addictive chorus and imagination sparking enterprise but sure to have you making vocal contributions in no time before The Future’s a Mystery lays reflectively upon  ears and thoughts. Its calmer air and tone is an emotive caress, a melancholic serenade given greater emotive depth and texture by the cello of David Dhonan.

The acoustic cored stroll of A Better Way wears a great fifties influence to its intimate saunter, Robinson’s brass lures, as the lyrical reflection , an easy tempting to get carried off by while The Words Wouldn’t Form dances with ears and appetite draped in folkish hues. At this point we are midway through the release and Stone’s songwriting and imagination increasingly shows itself to be as ripe and magnetic as it has ever been but stepping forward with fresh maturity and boldness track after track.

The summery All We Need to Know similarly leans on English folk bred inspirations for its engaging meander, textures given more urgency and mischief in the rousing stroll of Everything’s a Lie immediately after. The second of the two also has an indie pop catchiness and joviality which takes thoughts to bands such as Jim Jiminee and The Sundays, a flirtatious element quickly grabbing feet and appetite.

The song’s energetic intent is gathered up and given further tenacity in Empty Head, the first in a pair of tracks which launch the kind of rock pop antics which lit up the last album. There is a fire in its belly and devilment in its character which simply carries the listener eagerly away into the waiting rock ‘n’ roll jaws of See What Tomorrow Brings. It too has a sixties essence in its tone, the keys as much to credit for the inviting flavouring, but equally a meatier almost rapacious edge which only inflames song and the pleasure it brings.

Completed by the smoky jazziness of Love Will Set Us Free, the increasingly compelling when your whole world turns to dust leaves real anticipation of major things, if not now, ahead for Richard Stone and a blue flame. Whether the album outshines one of our favourite releases last year in its predecessor, we are still debating but certainly it rivals it and most other melodically teasing offerings out this year.

when your whole world turns to dust is available now @ https://itunes.apple.com/gb/album/when-your-whole-world-turns-to-dust/id1279472334

Tags: A Blue Flame -, folk, Jim Jiminee, Pop, Rock, someone else’s dreams will fill our home, Swing, The Divine Comedy, The Sundays, What We’ve Become Is All That Now Remains, when your whole world turns to dust, Woodman Stone