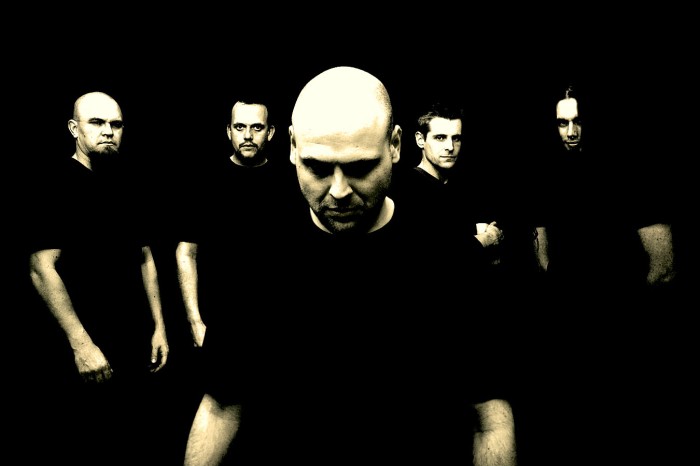 Though formed in 2010, UK metallers Kinasis maybe a proposition, like for us, which has escaped your close attention up till now. That is surely going to change with the release of their new EP, a ferociously striking and aggressive incitement loaded with hungry unpredictability and a technical prowess which simply inflames the fascination and pleasure. The four track insurgency is Pariah, a proposition which embraces an array of metal bred flavours in a cauldron of ravenous imagination and rabid dexterity.

Since emerging seven years ago and drawing strongly favourable responses with a debut demo the same year, Kinasis has grown into the British metal scene with increasing individuality and potency. Recent years their reputation earning live presence has seen the Bridgwater quintet shares stages with the likes of Sepultura, Malefice, Flayed Disciple, Sworn Amongst, Abadden, and Tacoma Narrows Bridge Disaster among many as well as venture into Italy alongside S.H.I.N.E. The release of Pariah feels like and should be the moment when Kinasis step from the shadows and stamps their creative authority and individual sound upon the extreme metal landscape.

Produced by Justin Hill (ex-Sikth) and wrapped in the artwork of Andy Pilkington of Very Metal Art, Pariah instantly goes for the jugular with opener Red Earth. Riffs surge through ears with a rapacious nagging whilst rhythms purge their animosity straight onto the senses. With every passing second the intensity rises but with a virulence and infectiousness which has the body bouncing to the ferociousness. A Korn-esque essence emerges as clean vocals invite nu-metal nuances, an industrial dexterity reminding of Static-X joining in as the track fluidly twists and turns through its inventive drama further embracing melodic and atmospheric suggestiveness. It is sheer magnetism, the track a mighty persuasion and alone the declaration of the coming of age of a new force to take notice of.

The following Black Dog creeps up and prowls the listener with predacious riffs and stabbing beats, then once sizing things up vocally and musically plundering the imagination with vocal tenacity embracing both raw and clean throated enterprise as death and technical metal tendencies dance which each other in barbarous intent.  As nu and groove metal elements get involved, things only become more precise rather than muddled, Kinasis showing their adeptness at weaving diverse and seriously enticing trespasses. For personal tastes the track never quite lives up to its three companions but certainly leaves no element of dissatisfaction in its wake.

Kindred similarly stalks ears if with a less obvious enmity as melodic strands entwine its initial proposal. Even stronger Korn like essences emerge to pleasing effect across the song and around a death/grindcore merging which has hints of Cryptopsy in its own infectious savagery. Clean vocals interchange with barbarous expulsions to further enhance the adventure, the band musically as bold and expert in switching through a kaleidoscope of styles and flavours without disturbing the song’s carnal nature and heart.

The release concludes with Incipient, an instant maelstrom of voice and sound colliding nu-and industrial metal psychosis with the harsher antagonism of variety woven extreme metal  before luring in just as appetising melodic and groove metal imagination. It is seriously arousing stuff, the type of sonic manna addiction is spawned from right here. As throughout Pariah, every twist brings a fresh incitement to chew over but mere seconds to consume before the next steals attention and increasing ardour.

It is the final throe of a quite simply stunning encounter from a band which will surely now get the attention their craft and imagination deserves. There have been a few bands coming to the fore as the British metal scene heads into new horizons and Kinasis have just made it known their intent to be there on the frontline.

Pariah is released September 29th and will be digitally available at most online stores with physical copies sold through http://kinasis.bigcartel.com/ and at shows.