High Down – Moving On

Suggesting they might be the ones to give the British pop punk scene an invigorating new breath, Portsmouth hailing High Down have just released their first EP. Moving On offers five slices of ear pleasing infection carrying punk rock, each bearing a sound with a spikiness which alone commands attention and further investigation.

Emerging last year, High Down made a potent mark with debut single Family & Fiends, the track recorded with producer Matt O’Grady (You Me At Six/Deaf Havana). Its impact was followed by the band playing slots at the likes of Seasick Fest, Butserfest, and Teddy Rocks Festival as well as share stages with bands such as WSTR, Roam, and Like Pacific. It is fair to say that things are beginning to stir for the quartet, a motion sure to gain momentum through Moving On.

The EP opens up with new single Life Lessons, guitars instantly luring ears with their catchy invitation. It is an infectiousness which is as instinctive in the vocal prowess of Luke Smithson and the rhythmic stroll of bassist Tim Hoolahan and drummer James Grinter who it appears has since left the band. The energy of the song is bold but with an enterprising restraint, it constantly pulling on the reins throughout but blossoming from that same reflective control. Feet and ears are soon lost to its temptation, appetite to its mix of harmonic warmth and again reserved but open irritability. 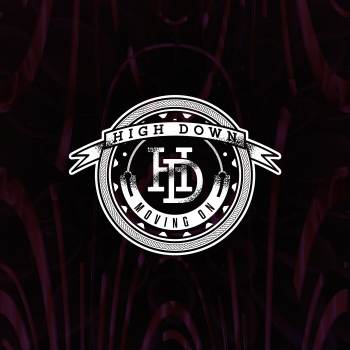 Making History backs up the fine start with its own line in melodic suggestion and rhythmic persuasion, it too keeping a hold on its boisterousness but giving enough of a rein to stir the spirit especially within another rousing chorus. The guitars of Darrell Ellis and Joe Soar weave a captivating web of sonic adventure with the former’s vocals potently backing the lead tones and expression of Luke Smithson. There are no big surprises yet each moment of accomplished endeavour increases the song’s draw, a quality just as inescapable in next up All On You. High Down has been given comparisons to artists such as Blink 182 and New Found Glory, the third track with its high kicking beats and nagging riffs a contagious example of why. There is a greater fire in its belly than in its predecessors and similarly an even more imposing catchiness that commands attention and response as smart hooks and harmonic dexterity relentlessly tempt.

The acoustic seduction of Rescue Me follows with vocals and guitar crooning knowingly with thought and emotion. The song features the guest tones of Nottinghamshire singer Christina Rotondo, her vocal beauty a striking essence in the union with the similarly impressing presence of Smithson. With a rawer edge to its gritty finale, the track grows in intensity and emotion to truly hit the spot before making way for the pinnacle of the release. The best track on offer for these ears, Against The Tide instantly winds wiry tendrils of guitar around ears, their steely touch alone a keen lure but only tightening their invitation with their niggling prowess, one matched in dexterity and persuasive trespass by the muscular swings of Grinter and the growling bass of Hoolahan. It is a dynamic and imposing yet again seriously infectious proposal to bring the highly enjoyable encounter to a fierce close.

In many ways there is nothing overly remarkable about Moving On yet every moment it shares is rich in enterprise and energy whilst being backed by a potential which suggests High Down can have a big presence on the UK if not European pop punk theatre.

Moving On is out now and available @ http://highdownuk.bigcartel.com/