Last year US metallers Casket Robbery awoke national attention with the release of their acclaimed debut album Evolution of Evil and now they are poking at even broader spotlights with their latest release, The Ascension EP. Offing three ravenous cuts of their brutal and virulent groove/death metal trespass, the release invades the psyche and stirs the body with a carnal flirtation.

Though building on the individual sound of the album, The Ascension is a whole new ball game in so many ways too. It is the first encounter with the Madison hailing outfit since the addition of Megan Orvold on vocals, she having guested on the last album replacing Dustin Foesch, and bassist Derek Silloway. With the line-up completed by guitarists Cory Scheider and Troy Powell, Casket Robbery goes for the jugular from the EP’s first breath. The initial atmospheric build of Pockets Lined with Flowers is an intriguing lure which swiftly pulls the listener into the waiting turbulence of sound abound with the vocal ferocity of Orvold. Her rabid lungs descend on the senses as the raw tempest of sonic animosity simply grows around her but together it is a maelstrom of spite swinging with viral grooves and infectiously intrusive rhythms. An instant contagion, the visceral intrusion pounds and ignites the senses while the imagination is hooked by great magnetic expulsions of melodic craft and atmospheric suggestiveness. 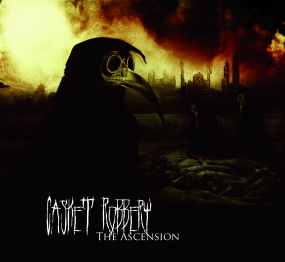 It is a stunning start more than backed by the EP’s title track. Eagerly prowling riffs court ears first, their instinctive swagger soon infested with sonic discordance and again catchy grooves. Each aspect has a predacious air to their tone and antipathy, a hue coating the vocals and the overall character of the dark and heavy animus of sound and emotion. In saying that, a lively contagious nature easily infests body and appetite as it does in the first track, just with a more primal and fearsome breath.

That heightened malignancy fuels final track Lilith too. It is a rancorous temptress of a song taking the boisterous swing of the first and the raw malevolence of the second into its own individual jaundice. Again spirals of venomous grooving create a wiry web around melodic toxicity as the track invades the body with viral seduction, offering as the others death metal to devour and groove ingenuity to submit to.

Casket Robbery can only ignite bigger and greedier attention with their growing sound especially with the striking and fiercely impressing ability of Orvold now heading the tempest. The band and previous singer Foesch were a formidable proposition but Orvold brings something else to the table; an ingredient which sparks and draws a fresh rapacity out of the band’s music to match her own striking attributes. The Ascension is the band’s wake-up call to the world but still feels a teaser for bigger infestations ahead for which anticipation is already licking its lips.