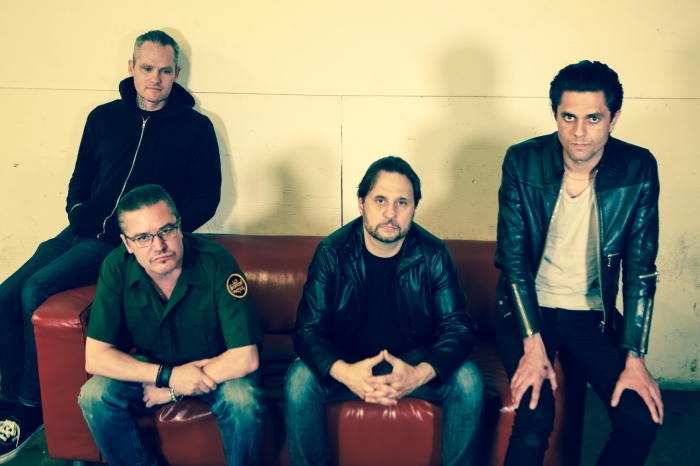 As the world seemingly surges rather than drifts into bedlam it is maybe not surprising that a sound is rising to echo it’s chaotic and discord fuelled order. It resonates from the creative union within Dead Cross, a project said to have emerged “out of a series of impractical schemes, fallen-through plans, and last-minute musical experimentation.” Featuring the combined acclaimed talent and creative ingenuity of Dave Lombardo (ex-Slayer, Suicidal Tendencies, Misfits), Mike Patton (Faith No More, Tomahawk, Mr. Bungle, Fantômas….), Justin Pearson (The Locust, Retox), and Michael Crain (Retox, Festival of Dead Deer), Dead Cross has just released their self-titled debut album; a deviously manipulative and skilfully conjured tempest of noise and intent, simply manic manna for the senses and imagination.

There really is no need to provide background to the members of Dead Cross, each individually and within a mass of bands having set down incitements and inspirations so many have fed upon and blossomed their own ventures with. So it is straight to the first breath of the foursome’s first release we go and the initial sonic mist of Seizure and Desist. From its midst surging raw riffs and rampaging rhythms burst, their assault soon joined by the distinctive and ever rapaciously mercurial vocals of Patton. Just as recognisable are the dynamically imaginative and textile swings of Lombardo; his anthemically biting incitement entangled in the sonic rapacity of Crain and the grumbling bestial tones of Pearson’s bass. A senses crumbling assault of hardcore, he track is as multi-flavoured as it is uncompromisingly furious and a hint of the developing web of noise and varied rock ‘n’ roll infesting the punk heart of the release.

The following Idiopathic even further harries and bullies the senses, its rhythms fuelling a barbarous catchiness which spreads to the united vocal attack and raw tone and causticity of the outstanding track. Unpredictability is as rampant as animosity, mischievous craft and fun equally as bold within the senses ravishing, body inciting maelstrom. Every passing second brings a fresh breath of bold and devilish adventure, the track a dancing predator by the time it makes way for the waspish nagging and unrelenting beating of Obedience School. It is glorious stuff, barbarous and harmonically bewitching leaving a tapestry of punk, alternative metal, and gothic rock suggestion.

Shillelagh is simply punk rock yet hardcore unafraid to embrace the spices of other pungent flavours to its infectious animus; the result a venomous contagion which has the body bouncing and appetite drooling before the imagination is enslaved all over again by a riveting cover of the Bauhaus classic Bela Lugosi’s Dead. Infesting it with the kind of energy and boisterousness felt at the Batcave venue back in the day, Dead Cross ensure the shadows and haunting atmosphere of the original are still an invasive temptation; Crain casting veins of melodic acidity which alone beguiles the senses.

The caustic invasion of Divine Filth hits the spot dead centre right after too, Patton and co vocally swinging from imagination’s rafters as the music around them throws itself around like an imaginatively manic dervish, again every passing second bringing new twists and expectations destroying adventure. Grave Slave is equally as tenacious in tone and intent, the Suicidal Tendencies exploits of Lombardo seemingly inspiring the whole of Dead Cross as they funk out with raw intensity and rancorous resourcefulness whilst equally embracing a Melvins meets early Therapy? like friction. It is a highly addictive proposal within an album similarly growing drug like in its temptation.

The persistent creative harassment of The Future Has Been Cancelled matches the lure and entrapment of its predecessor with its own individual and increasingly ravenous quicksand of sound and invention, at one point sinking into a quagmire of heavy seduction before bursting out with its instinctive rabid virulence of energy and sound to head towards the waiting heavy set jaws of Gag Reflex. It too meanders and dashes through a landscape of evolving gaits and twisted manhandling of the listener; each turn increasing its magnetism and our subservience to its manipulation.

The industrially lined shadows of Church of the Motherfuckers brings the album to a mighty conclusion, the track lumbering along with a primal swagger as resonating beauty glistens in its atmosphere. On the ground irritability guides the tempestuous exploits of the track, its climate remaining relatively clam but around a volatile heart which beats with combustibility. Through it all Lombardo springs a rhythmic trap which enslaves body and spirit, his creative mastery the last word in persuasion as the album comes to a thrilling close.

The tag super-group is bound to accompany many references to Dead Cross but ignore them. The band is a real and potent new force in its own right, yes embracing the previous experiences and exploits of its creators but offering something very different and exciting to rival and outshine most hardcore/punk noise exploits around them.

The Dead Cross album is out now via Ipecac Recordings through most stores.