Maypine – In The Back Of My Mind

Providing a rather strong introduction to themselves, British pop-punks Maypine release their debut EP this month. In The Back Of My Mind offers five tracks of infectious melodic punk bursting with potential and an already revealing potent craft in songwriting and enterprise. It is not jaw dropping or particularly unique but certainly commands eager attention with ease, success in anyone’s book.

Formed around the middle of last year and rising from the ever vibrant Brighton music scene, Maypine soon showed their strengths and lures on the local live scene, continuing to draw support and acclaim thereon in leading up to the imminent release of their first EP. Recorded with producer Ian Sadler (ROAM/Homebound), it opens up with recent single A Little Sooner which soon has ears cupped in a weave of melodic guitars speared by striking rhythms. From their midst, a strolling gait loaded with instinctive catchiness breaks, vocalist Jason Payne backed by the equally alluring tones of rhythm guitarist Dan Jarvis, magnetic at the fore. It is hard not to be swept up in the song’s infectious nature and exploits, lead guitarist Becky East weaving a captivating web of melodic and enterprise to seal the deal. 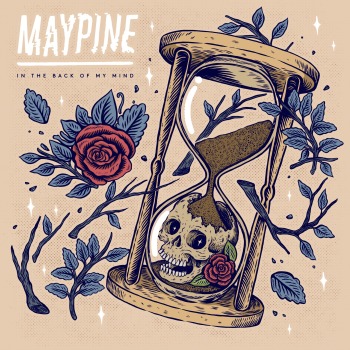 The great start is keenly backed by new video/single North South Divide which too needs little time to have ears lured and bodies bouncing. The swinging beats of drummer James Holdsworth make a great driving impetus to its exploits, the heavier tone of Tommy Roberts’ bass bringing a fine tempering to the fiery flames of guitar which again firmly hold ears and appetite as vocals share the song’s emotive heart. Calmer moments only add to its strength, revealing bolder aspects in the band’s imagination before Inside Out jumps in with its just as keen energy and tenacity. Though it lacks some of the more unpredictable twists of its predecessors, the track is a contagious proposal leaving enjoyment full and giving plenty of clues to the band’s success as a live proposition.

Never Far Apart calms things down with its acoustic croon, guitar and voice sharing real magnetism before things eventually boil up with the rest of the band adding their flames to the increasingly volatile smoulder. A slow burner in some ways compared to other tracks, it rises to be a compelling part of the impressing release.

Closing track Day After Day brings things to a strong conclusion though it too misses out on making the more striking impression of other tracks on the EP. Nevertheless tapping feet and pleasured ears endorses its catchy potency and its part in ensuring In The Back Of My Mind leaves a strong appetite for more of the Maypine sound.

With numerous essences which should appeal to those with a liking for bands such as ROAM, Blink-182, and You Me At Six, the EP suggests Maypine is a rather promising new addition to British pop punk.

In The Back Of My Mind is released August 4th through Disconnect Records.

Tags: Better Than Never, Blink 182, Coast To Coast, Disconnect Records, In The Back Of My Mind, Maypine, melodic punk, Pop Punk, RingMaster Review, ROAM, You Me At Six