Founded earlier this year, the foursome of King, Beast, Jester, and Sin have taken little time to make a thick impression with a sound said to draw on the inspirations of Entombed, Motorhead, Amen, GG Allin, Cancer Bats and more. It is a ferocious affair, on the evidence of their first EP, as ready to have you swinging from the light fixings as savage the senses you were born with; simply raw rock ‘n’ roll in glorious rampage. 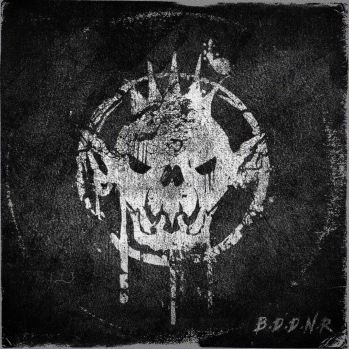 The EP opens up with its title track, Blood, Drugs & Death n Roll an infestation of scavenging riffs and nasty rhythms careering through ears with an appetite for mayhem. Their animosity though springs a swiftly addictive groove and an infectious swagger matched in the gruff vocal style and energy of King. Hooks are as prevalent as filth sharing riffs, thrash and punk uniting in a contagious animus hell bent on having the listener stomping around with middle fingers raised. Those Amen and Motorhead influences are especially vocal but immersed in an insatiable tide of character and tenacity all of Goblin King making, a rich flavouring equally flooding the following, just as superb second track.

Titled Goblin King, it is the kind of anthem no defences work against; an incitement from its first breath which has body and spirit eagerly embroiled. Riffs and rhythms swiftly confront and infest, vocals soon adding their bullying tactics until it all erupts in a chorus only the deaf could escape being hooked on. It is a chorus taking a breath at its final throes giving greater clarity to one glorious bassline and tone which spines the whole tempestuous contagion. Some tracks are instinctively manna to ears and the passions, this lustfully one for us though hunger is left dissatisfied at its departure after barely three minutes.

The opening pair gives the rest of the tracks a hard task to match their united triumph but the likes of 667 and Eye Of The Storm make a potent rolled up fist of it. The first is a ‘milder’ proposal in relation to the scourges before it but still has an attitude and hefty swipe to its presence which has you warily launching your participation and an unpredictability which wrong-foots and sparks the imagination at certain moments. Its spicy assault reveals a far broader landscape to the Goblin King sound and writing than its predecessors, one equally as refreshing and it is intriguing for an adventure the second of the two also embraces in its multi-flavoured, metal infused punk rock charge if not quite to the same boldness. With the guitar a flamethrower of melodic craft and rhythms an incessant examination of the senses, the track is inescapable virulence.

Death Sti-XXX brings things to an antagonistic close, crawling all over the listener with irritability and creative spite; a discontent breeding another addictive groove, spikily grabbing hooks, and anthemic incitement. Admittedly, initially the song did not make the same strong impression as its companions but over time had body and appetite seduced just as tightly.

Blood, Drugs & Death n Roll is pretty much a physical interpretation of its title; an affair basking in its grubbiness and relishing its prowess of igniting the energy and spirit of those it preys upon. It may be greedy but we so want more of Goblin King and are already finding it hard to patiently wait.