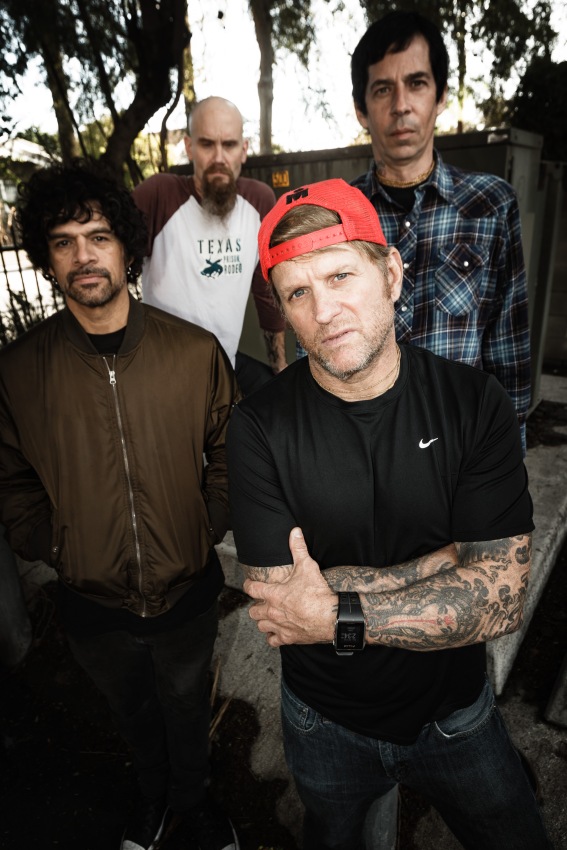 Bringing together the highly recognised talent of certain individuals from various acclaimed bands does not always guarantee something special but in the case of Bloodclot, it feels a given such the instinctive union between its collective. The band is the coming together of Cro-Mags vocalist John Joseph, former Danzig and Murphy’s Law guitarist Todd Youth, drummer Joey Castillo formerly of Queens of the Stone Age, Danzig, and Eagles of Death Metal, and Mondo Generator frontman and ex- Queens of the Stone Age, Kyuss bassist Nick Oliveri. Together they confirm that given with debut album Up in Arms, a physical and lyrical roar of hardcore defiance.

Unleashing twelve ravenous slices of punk rock with more inescapable hooks than found in Leatherface’s pantry, all fuelled by raw irritability at the state of the world today, Up in Arms is a crowd uniting battle cry. It fuses familiar essences with the fresh appetite and invention of a quartet seemingly destined to come together at some point. Everything about it is as organic as it is rabid, as challenging as it is rousing; taking no prisoners but rewarding those who it devours time and time again.

The album’s title track crashes in on the listener first, springing from an invasive sonic mist with a slavery of guitar and rhythmic predation as Joseph pokes and stirs the senses with voice and word. Castillo’s beats are rapier sharp and imposing, Oliveri’s bass carries an infectious brooding whilst Youth’s riffs and hooks ensnare across four eventful minutes.

It is an ear gripping, appetite inflaming beginning which only kicks up a gear with the following Fire, a belligerent brawl of punk ‘n’ roll instantly chaining ears with a  virulent hook as rhythms jab and incite. If the Angelic Upstarts was merged with Sick Of It All, this could be their anthem while Manic infuses an even greater physical psychosis and unforgiving attitude to the torrential gait of its predecessor in its own addictive multi-flavoured rumble. 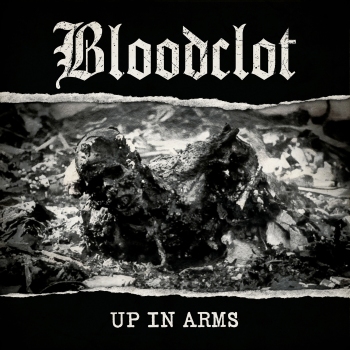 Through the sonic call to arms scourge of Kill the Beast and the Dead Kennedys scented Prayer, new twists of sound and invention force themselves through ears, each with a virulent strain of spiky hooks and body twisting grooves, while their successor has things bouncing like a dervish. Siva / Rudra is a contagion of enterprise as cantankerous as it is exotically seductive marked, as all three, by Oliveri springing basslines as funky as they are carnal. Alongside, Youth’s riffs and grooves come as primal as they are compelling whilst Joseph squeezes every ounce of uncompromising adventure and emotional incitement out of tone and syllable.

Soldiers of the New Babylon locks metal and punk together in its prickly vent, a testy proposition woven with nagging riffs and a magnetically throbbing bassline before Kali throws all those attributes into an insatiable maelstrom of punk rock temptation, taking best track honours along the way. Barely seeing the one minute mark, the track is irresistible but swiftly rivalled by the crabby assault of Slow Kill Genocide, the catchiness moment within Up in Arms and arguably the most choleric.

Pure punk rock truculence shapes the breath-sapping antics of the following Slipping into Darkness, Oliveri spawning his most addictive moment within the album bound in the searing flames of Youth’s guitar as vocals and beats vent their animosity with Life as One backing up its triumph with its mercurial but always commandingly imposing tapestry of quarrel and imagination.

The album is closed by You’ll Be the Death of Me, a slab of rock ‘n’ roll taking big chunks out of the senses as it excites with its Lard-esque espionage. Addiction has never been more vicious and seductive within three and a half minutes, certainly in recent times, as that spawned by the outstanding finale to one of the year’s biggest treats so far.

Produced by Zeuss (Hatebreed, Revocation) and mixed by Kyle McAulay at NRG, Up in Arms transcends being just a great release from another so called ‘super group’, it has given hardcore a fresh new breath and snarl which we can only hope is the first of many gales from Bloodclot.

Up in Arms is out now on Metal Blade Records across most stores and @ https://bloodclot.bandcamp.com/album/up-in-arms