It is never a bad thing to make a thumping good first impression and that is exactly what US quintet Vault 51 has done with their debut EP, Kid. Not that the band is exactly a new force to attention having been around a while now with a buzz soon brewing up around them and apparently they have been signed to Roadrunner Records at some point too. Kid though is their first meaty proposition for real focus following a clutch of magnetic singles, and a forcible reason to pay close attention to their rousing sound.

Roaring out of Atlanta, Vault 51 breed a sound which lies somewhere between alternative rock and melodic/post hardcore; a proposition embracing familiar essences with fresh invention to create an individual character which blossoms across the six tracks of Kid. Already earning comparisons to the likes of Red Jumpsuit Apparatus and Story Of The Year, the band gets straight down to persuasive business with the Drew Fulk (I Prevail, Motionless In White) produced and Lee Rouse mixed EP. Thirty Six gets things underway, it’s ticking suggestiveness soon submerged in a torrent of riffs and fiery sonic flames. That passing of time is still there working away as the song ebbs and flows, the bass of Alex Garmon a gnarly temptation and the jabbing beats of Joshua Landry a biting trespass as melodies and harmonies catch alight and soar. Frontman Landon Jones leads the way with his potent tones backed by the similarly alluring voice of guitarist Tom Jepson, whose strings simultaneously collude with those of Patrick Snyder in a web of enterprise which has ears gripped and an early appetite stoked in swift time. 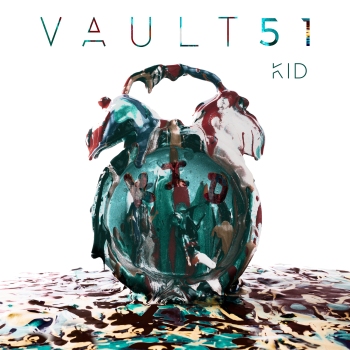 It is a powerful start to the release, that mix of varied flavours and textures a tempestuous yet composed blaze which as suggested earlier merges recognisable essences with bolder exploits belonging to Vault 51; a success found again within the following We Don’t Care. The track quickly shows itself a predatory individual, riffs carrying a sinister and aggressive edge tempered by again impressing vocals. With rhythms bringing their own cantankerous almost inhospitable intent, the track still plunders the senses; a Spineshank meets Breaking Benjamin spicing grabbing keen attention as things flow through mellow and harsh scenery with craft and emotional intensity.

The first two striking tracks set the marker for the EP which arguably the subsequent songs miss matching yet as latest single Magnolia with its melodic graces and atmospheric caresses soon reveals, the adventurous ear pleasing nature and power of the release refuses to die down. A volatile encounter as calm and seductive as it is fiery and imposing, the third song breeds a virulent infectiousness as forceful as that cast by its predecessors and in next up Wildfire. A poppier incitement from the off but soon lighting a pyre of emotion and intensity, the song has something of Australians Voyager and Sick Puppies to it, a mix of the two in many ways at least which has the imagination soon caught up in its creative drama.

The magnetic reflective calm of Mourning View makes an engaging contrast soon after; the song a melodic serenade on the senses with a brooding rhythmic lining as keys cast their suggestive poetry.  It too has tempestuousness to its heart which flirts with rather than breaks in ears, adding an anxiousness which firmly appeals before Sincerely Me brings things to a ferocious conclusion with a blistering tempest abound with melodic beauty and emotional drama. Maybe taking longer to initially convince than other tracks within Kid, it blossoms into one of the highlight of the release with its cyclonic breath and rousing ingenuity.

Kid makes an increasingly compelling and impressive statement through every listen, sparking the lift off of Vault 51 into the grasp of real attention but more importantly a certain new wave of hungry fans.

The Kid EP is out now on Spotify, through other stores and @ https://www.vault51.net/merch/kid