Over a career expanding over a decade or more there are moments when a band openly dips below their previous heights. That blip has yet to come with Scottish punks 4 Past Midnight since raising their middle finger back in 1989 and is not on the horizon yet as their new album, Battle Scars & Broken Hearts, proudly declares. Offering fifteen slices of the band’s uncompromising yet relentlessly infectious punk rock, the album holds no major surprises in a departure from that instinctive sound but easily refreshes an already established appetite for their militant roar across its tenacious body.

The Glasgow quartet’s sixth studio album among numerous singles, EPs, and compilations, Battle Scars & Broken Hearts sets out its agenda straight away with Do it Now. An opening scuzzy chord opens the gateway to a surge of rapacious riffs and punchy rhythms through which the distinctive lead vocals of drummer Peter McCartney gravelly growl. A delicious hook adds its bait from within the roar too, reinforcing the track’s instinctive punk ‘n’ roll contagion with addition inciting traits.

From one great track to another as For Life strolls in next upon the swinging beats of McCartney, the guitars of Tam Bowman and Fred Stevenson uniting in a calmer but no less boisterous invitation. As vocal chords quickly join in with McCartney’s, hips are bound in the groove of Stevie Goldsack’s bass, its grumble a flirtatious tease within the chest beating declaration of the track before being a similarly compelling lure within the drama clad, politically scathing Politician. Bowman again weaves ear grabbing melody lined hooks as Stevenson’s riffs crawl over the senses, they and the rhythmic prowess of Goldsack and McCartney gaining in aggression and adrenaline as the song hits its finale.

Through the more controlled yet predacious growl and narrative of the UK Subs-esque Guilty and the brief instrumental shuffle of Tonight, variety and further pleasure consumes ears, both tracks anthemic in their keenly individual ways though not as imposingly as 4pm On Tour (4pm crew pt4). The fourth instalment of the band’s rebel rousing, spirit sparking anthem, it swiftly declares there is no point trying to resist its instinctive persuasion to roar your head off and physically stomp especially through its virulent chorus; the track leaving the body and heart elevated in a way only 4 Past Midnight can. 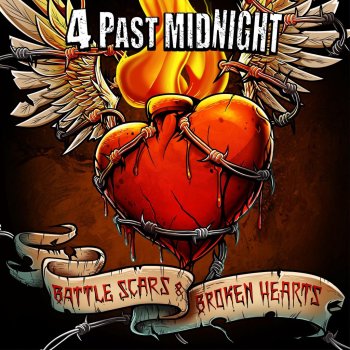 The sultry melodic hues of Bowman’s guitar immediately ignite next up Hope, Fear, Pain, Love, Desire if not lingering around long enough when seducing ears across its contagiously muscular canter for personal tastes while Survive just blisters the senses with its energy and rapacious tone. Though neither quite hits the levels of songs before them each brings hooks and invention which resourcefully leaves a smile on lips before being fully eclipsed by the chest beating might of Let’s Go. For any band, punk or not, wanting to learn about creating organic but purposeful anthems sure to whip up the hearts of their fans, this fevered soundtrack to any uprising has it all; 4 Past Midnight continuing to deliver such incitements album after album at times almost song after song.

Its bold corralling of emotions and spirit is followed by the rough and ready insight and equally tone of Alone, where a blend of old school and modern street punk with a whiff of hardcore for good creative measure is unleashed, and in turn by the Oi infested I Hate My Life. The first of the two again hits the spot without inflaming it leaving that to its ravenous successor and the magnificent Day After Day within which Goldsack’s bass brews up a primal almost carnal grizzle in its tone and virulence. The goodness does not stop there as Bowman takes the imagination into a melodic metal nurtured detour before things get salaciously punk again.

Accompanied by the piano elegance of someone simply called Vivian, McCartney shows his melodic vocal side to surprise and enthral as Whithered Roses next serenades.  Written by the band with Clare Bowen, it is a magnetic beckoning subsequently leading into the waiting jaws of the track with the bass again finding a bestial hue to its growl as hooks sink deep within the passions as McCartney is back to his sandy throated best with matching rhythmic dexterity. The track is superb, rock ‘n’ roll to whole heartedly give energy and zeal to.

The album is completed by firstly The Reason, a song hinting at pop punk instincts whilst roaring with a flavoursome mix of rock, and lastly through the gnarly and seriously catchy blaze of Can Anyone Hear Me; a plaintive call which grabs attention on every level. Together they provide a grand finale to another mouth-watering and increasingly thrilling encounter from 4 Past Midnight.

It is hard to pick the best album from the band, though there is no doubting that they are only increasing their impressive reputation as not only Scotland’s best punk band but one of the UK’s most essential propositions with each release, but for sure  Battle Scars & Broken Hearts is right to the fore of their biggest punk triumphs to date