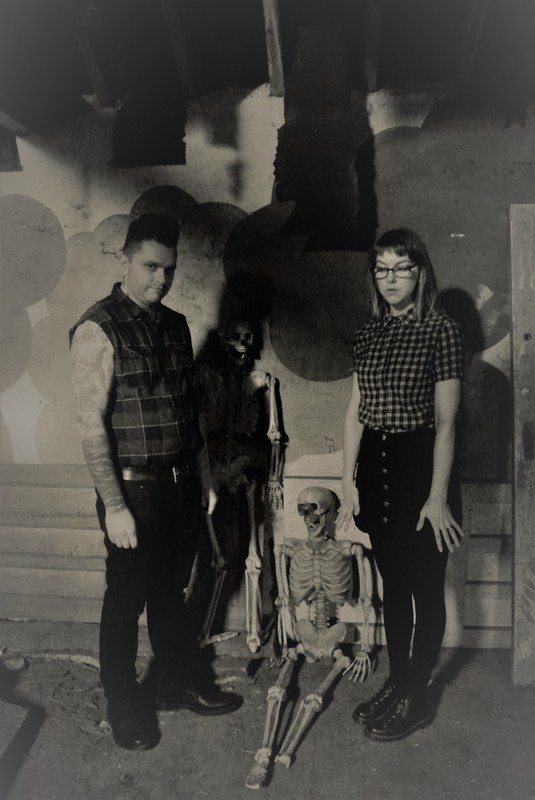 If ever there was a sound epitomising the dirty trespasses of the graveyard and the unbridled fetish escapades of cultish deviancy, it is that of British duo Snakerattlers. Like the occupants of those domains, the band’s sound is a lo-fi sonic trespass stripped to its bare bones but wearing the raw traits of a wealth of styles and flavours, all dirt sodden, feverish, and forcibly compelling. It is self-penned as rattle rock and is uncaged in full force within the pair’s ear gripping, spirit rousing debut album This Is Rattlerock.

The band is the creation of husband and wife Dan and Naomi Gott, previously of garage punk band The Franceens. Their new project, Snakerattlers unknowingly had its seeds sown when Naomi wanted to learn how to play drums. Going along with her to practices with his guitar, a sound and creative spark instantly caught their attention and thoughts that there was “the potential to be a lot more than just a rehearsal room jam band” in their exploration. What emerged is a fusion of garage rock, death punk, and psychobilly embedded into a rockabilly heart; a bold bare arsed roar of sound which now rips, rattles, and rolls the senses within the band’s sensational first album, a proposition recorded on reel-to-reel tape by Adam Richards of Leeds rockabilly outfit, X Ray Cat Trio.

Imagine the creative instincts of Link Wray, Hasil Adkins, The Cramps, Dick Venom, and The Creeping Ivies entwined and twisted and you get a flavour of the Snakerattlers infestation of ears and imagination. As mentioned, it is a raw and often scarring trespass which challenges and inspires whilst simultaneously thrilling and lustfully exciting from the opening seconds of first track, I Won’t Hold Back. The opener hits attention with a great guitar jangle initially, Dan’s vintage spice an instinctive lure soon joined by the punchy swings of Naomi as a Cramps meets Johnny Burnette like intrusion trespasses the senses and a swiftly established appetite. With the guitarist’s vocals an equally potent lure, the brief song prowls the listener, jabbing its lingering toxicity into the passions like a slow but determined tattooist.

The great start is continued by Let You Go where a thick almost throaty jangle is the tease into a more rampant and feverish stomp of swinging beats and tenacious riffs. Old school rockabilly infested by current day garage punk devilry and a plague of hooks which refuse to relinquish their hold of the imagination, the track is a roaring addiction within one listen, an eternal nagging thereon in but equalled by the more controlled but just as scuzzy exploits of Rattlerock Rumble. As a jungle of rhythms ensnare feet, guitar exploits use hips like a puppeteer in the predominantly instrumental incantation before Oh My Love lurches into view with a dark swagger and clamorous nature though both are wrapped in a restraint which only adds fuel to the song’s magnetic fire. Like Johnny Carroll meets The Novas, the track is pure bewitchment with an occasional venomous bite. 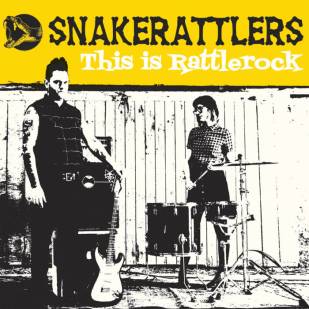 Let The Devil In Your Soul is another encounter which stalks the senses, its keen but controlled stroll belying a predatory nature taking swipes through the poised but examining beats of Naomi and the angular clamour of Dan’s guitar. With his vocals a soothing but equally volatile enticement, it is again impossible not to be hooked on the song’s seduction or indeed in turn on the more tempestuous instrumental rumble of Death Valley Driver which follows. It is an unrelenting road trip which has the body in motion and thoughts conjuring, both aspects again busily employed by the cinematic suggestiveness of The Love In Me. Like a sweaty kitchen sink drama, the song is a bare and honest hug of sound and emotion, its lines fuzzy and touch raw and oh so tempting. Even so, the great song is still eclipsed by the breath-taking stomp of Sweet Sixteen; a scuzz ball of rock ‘n’ roll woven from the decades of the genre and delivered with a fried electricity and concussive energy which leaves the senses reeling and blissful.

The zombie crawl of Bones infests the psyche next; its lumbering tenacious surge into the imagination littered with rhythmic bites and viscerally sonic waves as Dan’s vocals alone coax and prey. Once more submission to sound and album is swift and full leaving the final track to cap an already done deal between band and certainly these listeners. Ripper Rattle Rock simply lives up to its name like a fractious yet salacious fusion of The Cramps, Hasil Adkins, and Into The Whale. The track is rock ‘n’ roll in its unfussy prime but equipped with all the primal lures and seductions you could wish for as the album comes to one glorious unsterilized raunchy conclusion.

With The Franceens coming to an end earlier this year, the York pair have the time and energy to solely concentrate on Snakerattlers and they are going to need all of both if This Is Rattlerock catches the fire of attention that it simply deserves.

This Is Rattlerock is out now through Moon Skull Records @ https://moonskull.bandcamp.com/releases