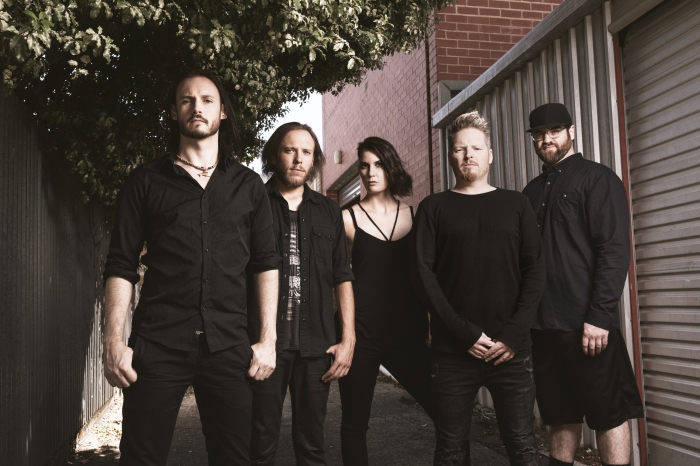 Barely giving the acclaim laden dust time to settle after the release of their self-titled debut EP this past February, Australian outfit Figures have just unleashed its predecessor in the similarly striking and fiercely enjoyable shape of Chronos. Offering five more slices of the Melbourne quintet’s alternative rock/melodic metal blend, the EP also has a new fresh breath and seeming richer maturity which defies the mere four months between releases. Obviously we cannot say when the songs of either release were written but the step is maybe surprising but greedily taken as Chronos eclipses the equally outstanding first offering from the band.

Formed as 2013 turned into its successor, Figures has risen up the ranks of attention with notably increasing success in recent times due to that critically acclaimed first EP and a dynamic live presence which has already seen the band  share stages with the likes of Caligula’s Horse, Twelve Foot Ninja, and Superheist. Broader focus and support for the band has without doubt been aroused these past handful of months and is sure to escalate again as Chronos is discovered by more and more. Instantly it has ears and attention in the palms of its creative hands as opener Recoil raggedly simmers into view and proceeds to uncage a gnarly groove as primal as it is magnetic. The guitar continues to growl and tempt as the lively rhythms of drummer Josh Sforzin and Jen Fletcher’s moody bassline join the blossoming affair; vocalist Mark Tronson soon in the mix with his agitated roar. Predatory and magnetic, the track needs mere seconds to entrap the senses and imagination, sealing the deal as Tronson’s melodic prowess unites with his rawer tones as steely metal and melodic rock textures equally collude.

The stunning start is matched by the equally dramatic and even bolder exploits of Alpha. Guitarists Paul Callow and Simon Edgell spring a lure of wiry riffs and sonic temptation around the harmonic delivery of Tronson, though as the music he allows harsher textures to escape his throat to keeps things unpredictable. Virulently infectious and persistently imaginative, the song is pure captivation; its heart earnest and body a tapestry of melodic and sonic intrigue with just the right richness of volatility to keep things intensely fascinating.

Tied Around follows, winding brooding grooves around ears as Fletcher’s bass groans with matching seduction while again Tronson enthrals with his impressive vocals. There is an agitation in the riffs and beats of Sforzin which is transferred to the steely grooves but tempered by the elegant beauty of melodies and harmonies floating across the song’s inner oasis. As with the first pair, creative magnetism is at play sparking an elevated greed which Point of Doubt feeds with its cosmopolitan almost shamanic nature. Sultrily exotic melodies align with anthemic rhythms within the song’s fiery blaze, its riveting landscape tempestuously sharing warm and irritable climates.

The EP concludes with Crying Door, a mellow melancholy lined croon shaped by keys and voice and their suggestive beauty, Tronson again a magnet in its midst. Darker hues walk the song’s edge, bassy shadows lurking as skittish beats court a more portentous edge. It is an entrancing close to a second seriously striking encounter with Figures. Musically the band has been compared to the likes of Incubus, Deftones, and Karnivool, all justified but add a touch of Voyager and possibly even Porcupine Tree and you get a fuller impression of what, to be honest, is a sound distinct to one truly exciting proposition.

Chronos is out now @ https://figuresbandofficial.bandcamp.com/album/chronos and other online stores.