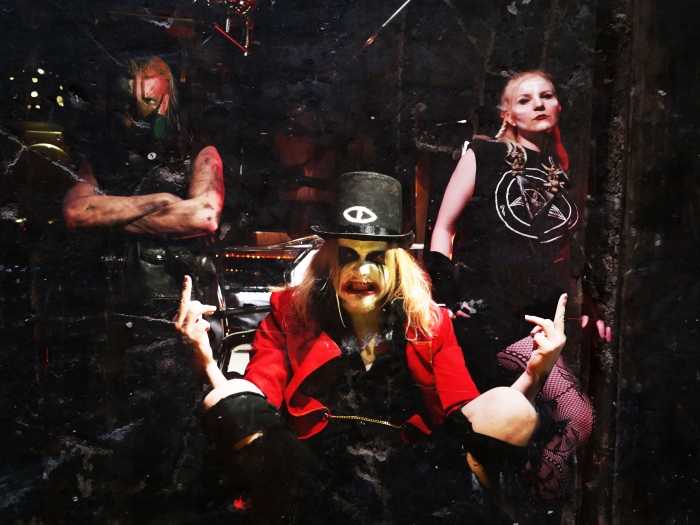 In a world bent on self-destruction from the intimacy of relationships through to the broader intolerance of religion and the greed of those governing it up front and behind the scenes, never has there been a more suitable and insidiously compelling soundtrack to it all than the new album from King Satan. Recently released by the  Finnish outfit, King Fucking Satan is a ten track devouring of the senses and an insatiable trespass of the psyche as flirtatious and contagious as it is emotionally pestilential.

Originally a solo project for vocalist, multi-instrumentalist, and producer King Aleister Satan (aka fra. Zetekh, the frontman of Saturnian Mist) when it emerged in 2015, the band has subsequently expanded due to live show demands with Kate Boss (vocals, synths, piano), John Oscar Dee (guitars, bass), Martin Shemhamforash (synths, bass), and Magister Demaniac (beats, additional instruments, programming) completing the current line-up. Musically King Satan creates and fester a senses consuming, body inciting fusion of black and death metal with dark electro, EBM, aggrotech and more besides whilst lyrically and emotionally, nothing is left out from being invaded and violated; the album exploring themes “found within occult philosophy, psychological mind-fuck and even sociological satire hand in hand with renegade rock ’n’ roll spirit that surely bows to nothing and no one!”

Dance With the Devil pretty much sums up the experience of listening to the album as well as providing the title for its opener. As a dark atmosphere crowds around ears, a vocal trigger brings hungry beats and synth cast temptation upon the senses. Equally predacious and alluring, with increasing addictiveness and virulence as melodies and hooks play, King Aleister Satan’s vocal trespass bullies and harries, every syllable explored and sharing primal instruction. Like a mix of God Destruction, Skinny Puppy, and label mates Barathrum, the track infests and incites, its infectiousness and inviting hooks as loaded with viciousness as its boldly direct animosity.

It is a great manipulative start soon matched and overshadowed by As Above So Below, a song managing to be even more primordial and catchy as nagging rhythms pound and synths cast their toxic melodies and hooks; an infectious trait matched in the swing of the punk/black metal scarred vocals. Within moments bodies are bouncing and hips swinging, something we have seen in close attention, as thoughts are twisted and stretched by the corrosive vocal and lyrical intrusion. Addiction appears inevitable so be warned as indeed in regard to Enter Black Fire which though not quite having the body as firmly in its puppeteer grip keeps things feverishly pulsing as thoughts are taken on a tour of ascending oppressive power and its escape.

Psygnosis has everything lustfully involved and enslaved next too, its musical psychosis the fuel for more unstoppable infectiousness and lyrical humour honed drama. Physically exhaustive and imaginatively tenacious refusing to leave the listener alone with its creative bordering psychotic enterprise, the track is superb, a new major highlight though instantly eclipsed by Sex Magick. Stomping over the senses with every beat a haymaker and each synth nurtured sortie of ears a rebelliously sexual coaxing, the outstanding track grows into a relentless and licentious tide of industrial/ EBM contamination adding J-Pop like ingenuity with the vocals of Boss glorious and a devilry akin to something Mindless Self Indulgence might expel.

The predatory instincts of Satanized course ears next, its infectious electro canter a bold niggling of the senses around the raw air and tone of vocals and word before Of Internal, Eternal & Spiritual War, with its haunting Cimmerian crawl through an ominous atmosphere woven around darkly whispered vocals and harmonic siren cries, envelops the senses.

Recalcitrant causticity gets its head in the electro punk epidemic of Spiritual Anarchy straight after; defiance and vocal antagonism a potent contrast to the quenchless dance and devious endeavour of synths and guitars while Destroy the World is a calmer but cancerous embrace of the senses. Suggestive melodies vein an invasive smog of sound and intent which dowses the listener in emotional and sonic malignancy.

The album closes with a similarly toxic climate and reflection, though Kali Yuga Algorithm has a thicker sinuous texture to its layers and black industrial, rancor coated wake-up call. The track leaves a lingering imprint on the senses as pretty much all within King Fucking Satan, a release which enthrals on the verge of rapture and provokes to the point of brutality for seriously one of the most rousing and enjoyable stomps this year so far.

King Fucking Satan is out now via Saturnal Records and available @ https://saturnalrecs.bandcamp.com/album/king-fucking-satan