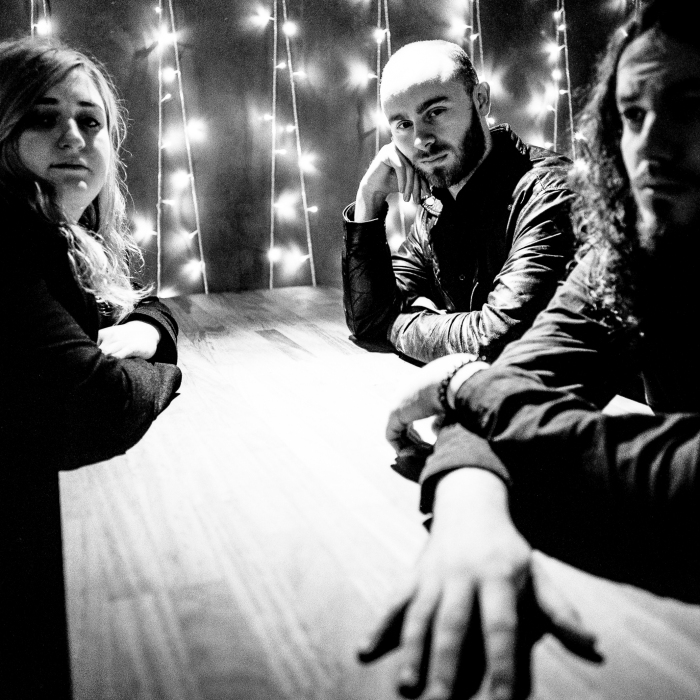 We cannot say why but the new EP from UK rock band Elevant kept reminding of fellow Liverpudlian Pete Wylie. It certainly was not in the music, the band and one of their home city’s most essential musical inspirations creating music as similar as night and day yet it was a nagging thought throughout the Normal Life EP. Moving on though, the trio’s new release is a dark and often emotionally imposing proposal but equally one open to infection loaded grooves and an instinctive rock ‘n’ roll catchiness which manages to accentuate rather than temper its shadow clad themes of “love, war, disillusion and displacement.”

Consisting of lead vocalist/guitarist Michael Edward, bassist/vocalist Hannah Lodge, and drummer/vocalist Tom Shand, Elevant has grown since emerging in 2014 to be a potent part of the Liverpool music scene as a band and in its support, Edwards fresh from organising and playing the successful Wrong Festival in Liverpool which also featured the likes of Bo Ningen, The Wytches, Part Chimp, Heck, Evil Blizzard and numerous more. They have also released a trio of increasingly well-received and praised albums with the third, There is a Tide especially lauded. Now it is the Normal Life EP casting its reflections and imaginative exploration upon ears and body, and a fine evocation of both it is too with its web of heavy and alternative rock, psych and krautrock, and grungier elements infused with plenty more spices.

Recorded at Abbey Road by Sam Jones and mastered by Pete Maher (Jack Jones/Scissor Sisters/U2), Normal Life opens with Acral Affection and instantly had ears and appetite enticed with a delicious post punk bassline carrying a funky inclination to its nature as slithers of guitars spark and scythe enticingly across its bows. With firmly skipping beats, the coaxing is swiftly addictive and only compacted by the equally inviting tones of Edwards before a momentary crescendo erupts, the cycle revisited quickly after again. Imagine a collusion between Pere Ubu, Artery, Modern Eon, and Japanese Fighting Fish and you get a glimpse of the song but not the whole picture of its enjoyably but ultimately truly hard to pin down sound.

And that broad tapestry is pushed again by the following Slow, its jazzy funk kissed entrance wrapped in a beguiling atmosphere blossoming further with post rock essences and noise rock trespasses as vocals add their enticement. With melodies courting more Beatles like hues throughout, it is an intriguing affair, slowly working its lures compared to the more direct bait of its predecessor but seeping into and lingering in psyche and appetite with each passing twist and fascinating layer, each helping building up the ingredients and invention of a desert rock/psychedelia shaped finale.

The outstanding Stabs has the body bouncing and imagination weaving with its enslaving post/garage punk nagging around Edwards’ expressive croon, all gaining greater volatility and tempestuousness syllable by note as the track draws on wider flavours for its alluring irritability and spiky trespass. The bass of Lodge is brooding and gripping, the swings of Shand invasive and anthemic as Edwards springs another round of provocative hooks and emotive insights.

The prowling shadows of next up Somewhere Safe uses mere breaths to seduce the senses, its shimmering seventies psychedelia nurtured melodies swiftly absorbing the imagination. It is with the muscular incursion of rhythms and riff led energy though where the track really ignites, an eruption leaving a touch of its intensity in the subsequent return of that initial smouldering air. The track is a fascination for ears and thoughts, not quite matching up to its predecessors for personal preferences but captivating from start to finish before the EP’s title track rumbles and grumbles to bring the release to a stirring conclusion. The final song’s aggressive nature is not adverse to melodic flames and harmonic warmth though, both coating the track’s more feral instincts.

It is a great end to an EP which grabs attention first time around and only incites greater involvement and hunger for its intriguing web of sound and creative drama thereon in.

The Normal Life EP is out now on Loner Noise @ https://elevant.bandcamp.com/