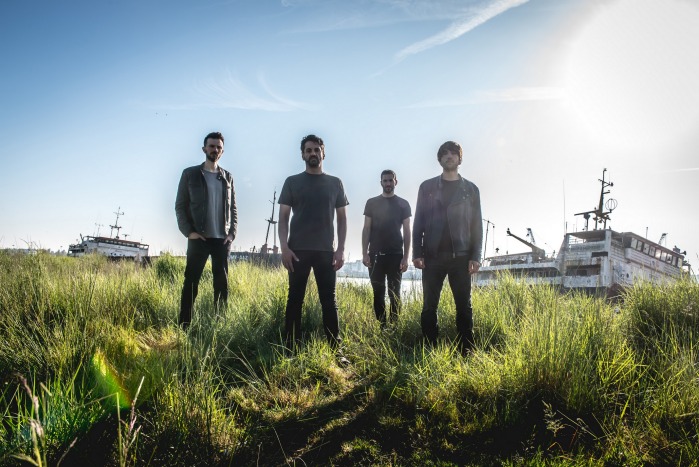 In a year of many striking, potential loaded debuts already, we suggest another especially potent and exciting introduction in the shape of the EP, Halo Pt 1. The six track offering comes from Anglo-Italian alternative rock quartet Waiting For Titor, a band founded in 2012 which has honed their sound into one fascinating and thoroughly enjoyable proposition; its imagination bred within a maturity of songwriting which just commands attention.

Waiting For Titor rose from the ashes of Italian crossover outfit Convergence, drawing their moniker from a fictional name used by a blogger claiming to be a time traveller from the year 2036. Embracing inspirations found in the specific likes of Nine Inch Nails, New Order, Depeche Mode, Foo Fighters, Sigur Ros and Massive Attack, the band has risen through the focus of the underground and having recently linked up with Belgian label Diva Records, the Manchester based foursome are poised to tempt national attention and quite possibly more such the potency of their first EP.

Recorded with Belgian producer Geert D’Haene and mastered by highly acclaimed Italian engineer Giovanni Versari (Muse), Halo Pt 1 coaxes intrigue with its brief breath of an opener, Proemio an atmospheric piece of suggestion which does not really give a clue to things to come but makes a thought involving lead into the EP’s waiting title track. The vocals of Alex Palladini instantly hold ears, his distinct expression cradled by vines of wiry melody from Mike Tomasini’s guitar. Prowled by the dark tone of the Max Andrini’s bass which sounds almost irritable against the post rock/ progressively woven tapestry of guitars and keys, the song absorbs ears and thoughts. Its bursts into more boisterous life driven by the skilled swings of drummer Vince Picciolo makes for a rousing finale with an intensity further explored within its successor.

Bitter End similarly has some restraint in its gait also but welcomes thicker shadows in its climate as synths with a Nine Inch Nails like air wrap the senses. Again there is a great drama and energy in the vocals whether they emotively croon or passionately roar, a blend matched in the sound as the track blossoms turn by turn. Built on emotional and physical crescendos, the song is a magnet for the imagination, only increasing its potency with every listen, as indeed does the EP, as fresh layers are discovered.

The dark rock essence within the song is escalated within the final trio of tracks; Diving Into The Black coming first with its rock pop/gothic rock fusion. There was a whisper of Dommin to the previous track, a spicing far richer here as the track infectiously strolls and emotionally flames. Synths are an evocative incitement, rhythms a forceful enticing, whilst the guitars almost flirt with their sonic mix of light and dark enterprise.

The melancholic caress of Twilight Fall is even more awash with the hues of the previously mentioned US band though its shadowed seduction is soon baring its own unique soul as Palladini shares heart and word within a siren of emotionally bare sound. Its outstanding temptation is soon matched in lure and might by closing track Leaving Again, a slice of virulent contagious rock repeating Waiting For Titor’s craft at entangling dark and light in an emotional rousing and provocative proposal. It is a song which declares itself the lead into the creative heart of the band though sharing best track honours with its predecessor.

The Halo EP is a truly potent first listen to Waiting For Titor which only increasingly impresses and entices with every subsequent outing into its dark exploration. Its individuality in sound and invention might not be for all, though it is hard to imagine many turning away, but for a great many others a budding affair will be on the cards.

Halo Pt 1 is released through Diva Records on June 2nd and will be available @ https://waitingfortitor.bandcamp.com/album/halo-part-1