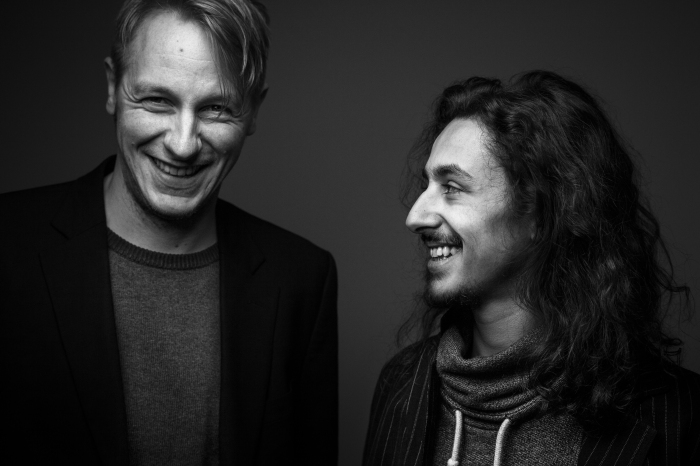 Bottle Next is a hard folk band from the French music scene. It is a tag which is maybe unique to the band not having come across it before but only partially touches on their sound. Weaving seriously engaging songs from the imaginative threads of everything from indie and pop, through progressive blues and hard rock to folk and indeed any mischievous form of rock ‘n’ roll you wish to suggest, Bottle Next make for a tantalising proposition which within debut album, Bad Horses, persistently encroaches upon rich fascination and aural seduction.

There is a real sense of fun within and with the duo of guitarist/vocalist/saxophonist Pierre Rettien and drummer/vocalist Martin Ecuer; a feistiness and devilment which openly fuels their music. From the release of their first single in 2011, the pair has drawn increasing attention and support with a pair of EPs surrounded by other individual tracks and videos as well as an energetic live presence which has seen them play across France and further into Europe; sharing stages with the likes of Triggerfingers, Lofofora, Zebda, Mass Hysteria, Didier Wampas, and No One Is Innocent as well as appearing at festivals such as Rock’n’Poche Festival, The Festival du Chien à Plûmes, Musikmesse in Germany), Belgium’s Mannrock (Belgium) and the Swiss Zikamart Festival.

Released a few weeks back, Bad Horses is an announcement for a wider range of ears and spotlights of the presence of Bottle Next; the Daniel Bergstrand (Meshuggah, Soilwork, In Flames) mixed release swiftly making the most of the opportunity with its opener Break Down the Door. The initial twang twisted strums of Rettien have an instinctive striking swing to their nature, a zeal matched in the senses rapping beats of Ecuer. That energy is equally as frantic in the delivery and character of the former’s vocals; together the duo creating a body inciting, spirit dancing slice of tenacious melodic rock as garage raw as it is hungrily infectious.

It is a thickly enticing start matched in memorable heights by next up Choices, the song a swagger loaded stroll of blues tinged rock ‘n’ roll sharing a Queens Of The Stone Age meets In The Whale like adventure. There is a rapacious essence to the grooves winding around ears and an atmospheric suggestiveness to the keys which interrupts the urgency of the canter whilst emerging folkish revelry has a funk seeded grin encapsulated by the earthily sultry lures of sax.

From one mouth-watering escapade to another as next up, Running Herd, takes ears in its grips with stabby riffs and agitated beats, both entangled in a volatile web of melody and vocal dexterity. As with its predecessors, involvement in its tenacious shuffle is instinctive; voice and hips giving quick submission to its imaginative multi-flavoured dance before Revolution shows the grittier hard rock side of the band’s sound. It too though weaves in a lure of melody and pop scented indie enterprise topped by a chorus wearing sixties/seventies pop rock catchiness.

A slightly calmer air drifts over Age of beauty; the song tempting and vivaciously crooning like a mix of XTC and Be Bop Deluxe though like all songs it never settles for one idea or style for much longer than it takes the imagination to adopt one of the moments of creative chicanery.  At times it is an almost punchy encounter, the next a floating caress and consistently a captivating proposal before the outstanding Overthere grabs an already keen appetite for the release’s romp with its heavier touch and spikier climate. Again a grunge seeded essence runs alongside the song’s heavier rock instincts, colluding in a slimline, impulsively addictive temptation smoking in its shadows with a wealth of additional flavoursome scents.

The melody woven infection of The Lift off straight after is no less an inducement of physical participation, its warm and boisterous invitation a fest of inventive festivity for limbs and energy. The same equally comes with closing song The Woody Man where its folkish colour and melodic charm takes the track’s kinetic nature in hand, giving it a great layer of restraint without defusing its multi-style embracing devilry and impact on body and spirit. It is a great end to a rather fine album which it is fair to say had us leaping and grinning from start to finish, no track anything less than an imaginative galvanic romp. Bad Horses offers something really fresh in its familiar flavours and boundless enterprise in its bold and playful quest to simply rock ‘n’ roll. The best album you will hear this year, maybe or maybe not; destined to be one of the most enjoyable, without question.

Bad Horses is out now @ https://bottlenext.bandcamp.com/album/bad-horses