Dancing summers and busy feet: exploring the contagion of Sofasonic 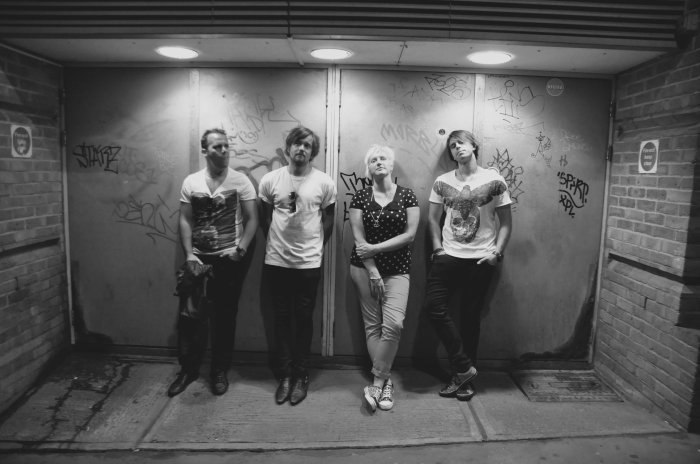 Multi-flavoured and multi-textured, the Sofasonic sound is an infectious proposition beginning to replicate potent local success on a broader scale. This year sees the UK quartet release their debut album while they have already begun an adventure taking their magnetic sounds into Europe. Grabbing the chance to find out more about Hertford foursome, we talk to Sofasonic about beginnings, band evolution, album and plenty more…

Hello all and thanks for taking time out to talk

SJ started the band way back in 2007 and Elliot joined a couple of years later. Michael drunkenly invited himself to an audition back in 2010, and Niall joined in 2013 and we haven’t looked back!

Have you been involved in other bands before? If so how has that impacted on what you are doing now, in maybe inspiring a change of style or direction?

Michael – used to be in a few bands mucking about with friends, but first serious band was Fugazirum, then Selahdore, and currently Sofasonic. For me, the things learnt not just in those bands but just listening to other people’s music is what has inspired a change in our writing the most.

Niall – I was in Feathertop before joining Sofasonic.

SJ – I was in a band called Karma Truffle before forming Sofasonic.

Elliot – I’ve been in a few bands and still join up with Alstavasser, for random reunion gigs!

SJ – The name has always been the same since the start back in 2007 with a very different line-up. It represented a strong, fast paced sound in a laid back way which still rings true 10 years on.

Was there any specific idea behind the forming of the band and in what you wanted it and your sound to offer?

SJ – Something in here!

Elliot – The band has definitely changed and not just through time moving on, but the members of the band changing. Yes we’re older now, but the drive to produce our own music and get out there and get it heard is still something that binds the whole band together.

SJ – It started off much more towards the folk genre with a hint of indie rock. The whole dynamic changed when we went from having a female to a male singer, and the songs instantly took on a more ‘rocky’ feel. A change in guitarist pushed us away from the indie rock style, on to the sound you can hear us producing today. A rockier, bluesy vibe but still keeping the thoughtful melodies from our folky days!

Has it been an organic movement of sound or more the band deliberately wanting to try new things?

Niall – I think there has been a mixture. Before I joined the band, I’d go and watch and it was certainly a lighter sound. As members of the band have changed, the style has naturally shifted to the strengths of those members, and certainly on our latest album Get Made, we’ve started to experiment a little, and that is sure to continue more in our live shows.

Michael – For the latest album, we’ve been inspired by bands like Rival Sons, and as the album progressed bands like Crobot and Queens of the Stone Age can be heard influencing our approach. For me, I try to take elements I enjoy watching from any band and see how that can fit – with my own take on it – into our music.

Elliot – Definitely! You need your own take on things of course, but watching bands that are up there, doing it, giving you a good vibe, that’s what you want to give to people watching you.

Is there a particular process to the songwriting within the band?

Michael – We do have quite a unified approach and we gel really well in the studio. For Get Made, the approach followed a pretty similar structure for all of the songs. I would stick a rough idea down for a riff/chord progression; we’d then jam that for a bit in rehearsal and layer everything on top. Something like the title track, Get Made came together in about 15 minutes, where as one of the deeper songs Love Qui Die, went through about 4 or 5 structure changes before we were all happy.

Michael – If I haven’t come across some random lyric somewhere and brought some lyrics to a song, I usually ask the guys for a subject and a vibe of what they are feeling when they play it. From there, I’m off! Sometimes the lyrics get twisted so they are about something real, other times it is a completely fictitious situation. Almost like a method actor, I’ll sink into the ‘role’ of the song and out pops some lyrics – hopefully making sense!!

Please give us some background to your latest release, Get Made.

Niall – Get Made is the culmination of 3 years work and is a real change in direction from our first EP as we talked about earlier. We wanted the best, so it took a few months to get it right but we feel we got there. Someone who picks it up will go on a journey of hope, despair, and ultimately triumph. The meanings behind the songs are quite dark, but the music fights against that and brings it all together and hopefully people will have an experience listening.

Get Made is released at the end of June and we can’t wait to share it!

Can you give us further insight to the themes and premise behind it and its songs?

Michael – For the Get Made album, all of the songs have quite a dark meaning about the struggles of life, be that physical or mental. It’s about the hope of overcoming anything that can be thrown at you. Musically they give off a different vibe which is exactly how we wanted them to sound. For example the title track, is a thumping tune with a catchy riff, but the song is about overcoming an oppressive partner. It’s a happy ending though, talking about it in the past, so hope conquers all!

Elliot – Ha well! The start of the [new] album process, the first few songs were finished and just needed slight tweaks here and there. The second half of the album we were going in with the tune done, but not as set in our heads. As in, the first few songs haven’t changed that much from our first play. The newer songs on the album have some effects thrown in, some different instruments added. We’re certainly a band to get creative in the studio!

Niall – We’ve been really lucky that Hertford is full of venues that are willing to support new music. The Hertford Corn Exchange is a massive support to us and is a great venue. Also The Lord Haig is one of our regulars and it is a great venue. Playing covers gigs help us support the band almost ‘for free’, but I’d say it’s a great thing to do for any band. Yes play as many originals and open mic nights as you can, and having a covers gig to – not only help towards costs – but gain new fans is a huge opportunity. We’re really proud that some of our biggest fans have noticed us from covers gigs and they want to hear some at all of our covers gigs!

Michael – Oh yeah definitely. We’ve been very lucky as well in getting slots on 2 of the biggest events in Hertford. Rock at the Castle and the Musical Mystery Tour; both annual events with the Mystery Tour being an all-dayer, with gigs at pretty much every venue that can fit a musician from 12-12! Great exposure though and any new band in our area has to get a slot and get noticed.

How has the internet and social media impacted on the band to date? Do you see it as something destined to become a negative from a positive as the band grows and hopefully gets increasing success or is it more those struggling with it are lacking the knowledge and desire to keep it working to their advantage?

SJ – This has been a huge change in the last 15 years or so. MySpace, then Facebook, Twitter, YouTube…the list goes on! It’s great that every band is now more accessible, but at the same time that makes it even harder to break through. You only have to look at the success of awful things like X-Factor that creates throwaway acts that ‘make it’, when you’d be better off going to your local venue and supporting an unsigned band. For us, the social media effect is great though. We share as much as we can and try not to become spam! The ability to live stream a gig so easily is certainly something we use and will be using as much as we can.

Michael – No problem at all, it’s been a pleasure! Hopefully this has inspired you to check us out and like our Facebook page (we’re needy!)! We have some big 2017 goings-on…..

We’re off on our first ever European Tour and have 6 gigs in 10 days in Belgium, The Netherlands, Germany, Denmark and Sweden. Even bigger news is that our first album Get Made will be released on the 26th June, and if you happen to be near one of our gigs pop in and say hello!