A handful of weeks short of its acclaim luring release a year ago, UK outfit Lonely The Brave follow their chart topping album with another new ear hugging EP. Featuring Diamond Days from the acclaimed Things Will Matter, the Cambridge quartet’s latest offering also provides two brand new songs and a haunting cover of a long time band favourite. Together they seduce the senses and spark the imagination, offering further reasons as to why people are suggesting that Lonely The Brave could be Britain’s, if not the world’s, future big thing.

Last year saw, beside the album’s triumphant release, the band play a sell-out headline tour and support Biffy Clyro on their travels across Europe. With the band currently in the midst of a UK tour supporting fellow city bred outfit Mallory Knox alongside Glasgow trio, Fatherson, Lonely The Brave with Diamond Days build on the similarly potent encounter of last Autumn’s EP, Dust & Bones; both releases not only feeding an appetite for the band’s ever brewing growth in sound and songwriting but re-energising attention on Things Will Matter with their lead tracks.

Diamond Days, song and EP swiftly captures devoted attention as a lone melody unfurls its gentle caress around ears. Soon beats add their rhythmic shuffle as vocalist David Jakes shares his distinctive and emotively honed tones. Quickly magnetic, the track only increases its potency as harmonies and further melodic enterprise from guitarist Ross Smithwick unites with the similarly potent touch of Andrew Bushen’s bass, together casting a suggestive web of temptation. Floating over the senses like a melancholic yet elegant cloud, the song haunts and bewitches in equal measure, brooding keys adding to its evocative air. 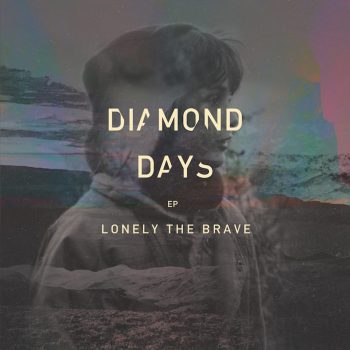 With the beats of Gavin Edgeley just as striking and lively, Two Heads follows, bringing a greater energy in gait and instinctive but controlled aggression. It is more a forcefulness than attack at the heart of the EPs second offering, but an anthemic trespass which gives greater urgency to the tapestry of infectious melodies and hungry riffs persuading an already keen appetite for the band’s sound to find a touch more greed.

Collider is a blend of the previous pair, initiating its presence with another blustery air but slowly creeping into the psyche with meandering melodies and vocal resourcefulness. Overall the song is more of a slow burner than its predecessors, its angular hooks and blossoming catchiness reserved and subtle yet ultimately the song leaves just as rich a pleasure behind as those before it eventually leaving in a blaze of emotive intensity.

As they have shown before, Lonely The Brave makes any track they cover their own, and The Rat is no exception. The Walkmen song is an emotionally exposed encounter, a haunting and haunted proposition floating solemnly across ears and thoughts as shadows brew in its lining. Their injection of drama builds into a rousing tide of emotive density ridden by Jakes’ continually impressing delivery and the melodic weaving of Smithwick. The track is superb, matching the heights of its companions if not stealing their thunder just a little as it too builds to a thrilling crescendo.

For those with the album already in their hearts, the Diamond Days EP is a new and compelling treat and for newcomers also a reason to further embrace a band and sound which is indeed evolving into something rather special.

The Diamond Days EP is out now through Hassle Records across most online stores digitally and on Ltd Ed Mint coloured vinyl; all links @ http://smarturl.it/DiamondDays_Order

Like Loading...
‹ Roxin Palace – Freaks Of Society
The lure of the moon and serenades; exploring Amycanbe with vocalist Francesca Amati ›