Shadowed reflections and bright legacies: embracing the heart of 1919 with Vocalist Rio Goldhammer

Bloodline is an album which is destined to not only leave a striking creative fingerprint on the year but the decade as a whole for not only post punk/gothic rock, but simply rock ‘n’ roll. The new outing from 1919, a band inspiring generations of artists from their emergence in the late eighties, Bloodline is not only one deeply rousing slice of musical adventure and imagination but also a major last triumph from founding member and guitarist Mark Tighe who sadly passed away virtually days before its release. It is a stunning part of the legacy the musician left global music. With deep thanks to vocalist Rio Goldhammer and also drummer Mick Reed, we had the pleasure to talk about Mark and also delve into the future of 1919, the fabulous Bloodline and much more…

Hi Guys and thanks for taking time out to talk with us.

Before we talk about your album, could you please just say some words about band founder and guitarist Mark Tighe who so sadly passed away recently; about him as a musician and friend.

It’s hard to put into words really. His legacy will be one of sound… it already is. He was an artist and trying to explain his craft in a few words would do it an injustice – it took him a lifetime to do what he did. If you look through his old online posts (something it seems we all do quite regularly), his words are very few – usually to punctuate an image. He lived and breathed art. His eulogy reflected this well. It was mainly music…Exactly what he would have wanted.

As a friend… well, he would have been blown away by the tributes that came for him. From the music press, from fans, from bands we’ve worked with and many that we haven’t. He was a humble guy who always thought of others first. He’d bring chocolate to rehearsals, even when his illness meant he couldn’t eat it himself. He looked after the merch for the band right until his last day – always with a hand-written note. He wanted to do his bit and never took our supporters for granted. I could go on for days about him. Anyone who met him, even for a moment, knows he is a huge loss to the world, and we’ve lived on top of each other for 2 years. It’s still hard to accept not seeing or talking to him

His untimely passing must make the release of your new album Bloodline, the saddest joy possible?

Of course. You know, the label called up after the CDs arrived saying “the album is too good not to be on vinyl”. I wish Mark had heard that. He was desperate to get a vinyl release. Sadness and joy are, yes, perhaps in equal measure. But the prevailing emotion is doggedness. We know what we have to do now, and we know who we have to do it for.

Do you know what the future of 1919 might be without Mark, or is that a question you have yet to ponder?

We’ve had to ponder it for a while but we’re determined to finish what we started. Mark insisted we find someone… he’d wanted to teach them the guitar parts himself but he deteriorated so quickly. He insisted “no one was irreplaceable”, but at the time we were more concerned with being there for him as friends. And indeed, we now have someone in the unenviable position of trying to learn the guitar parts without Mark’s tutelage! We’re determined to honour him, and we will. Humans are mortal. 1919 is not.

We do have someone on board though [Sam Evans]… Someone who met Mark a couple of times. We didn’t want a hired gun because the band is a family. It will be a new chapter for us of course, but we had a good idea of our future direction from our final months with Mark. There are a couple of finished tracks and a handful of demos from the last 6 months so we have a good base to work from. But I don’t think its right to say we’re “without Mark”. He will always be with us, and as long as 1919 is alive, so is he.

It is fair to say that for gothic/post punk fans who knew you first time around, 1919 was one of the most important and inspirational propositions in the eighties. Is that a feeling you found in people if not then when 1919 re-emerged a couple of years or so ago?

Absolutely… 1919 never performed outside of the UK the first time around, but we’ve found a lot of love from across the world. Particularly in France and Germany (and of course our favourite place, B52 in Eernegem) we’ve had some amazing audiences, and they tend to be a lot younger than our audiences at home. The band obviously means a lot to people and we take that very seriously.

Obviously the time between has seen original members grow as artists and people, can you describe how creatively 1919 evolved from those early heady days seeing chart breaking singles and an acclaimed debut album?

Mick Reed: Well, as you say we’re a lot more refined now in terms of musicianship. But you know, in a lot of ways nothing’s changed at all. The writing process is similar; as is the way we rehearse and record. There are no egos in this band and it’s just so easy to get on with it. This incarnation of the band has actually been the most stable line-up in our history. I honestly can’t see anything other than mortality come between us.

How did the link-up with Mark and Mick, of course the band’s original drummer, with you Rio and bassist Karl Donner come about; how did you all meet?

We hit the ground running really. Mark and I had been doing Circle of the Absurd and put the Revenge demo out as 1919. Mick and Karl had been doing some work together on some lost Ship of Fools material… Once Mark and Mick were in touch again we just brought the two pieces together.

Mark’s poetically haunting melodies and grooves showed they had lost none of their invention and evocative touch within the new album but there is a bold new freshness to the whole 1919 sound, more than maybe would be expected with simply maturity and experience involved. How would you assess its new character and body?

It feels fresh. We’re simultaneously an old band and a new one… but aside from that I think you’ve said it yourself. Mark spent a lifetime perfecting a sound that was completely his, and Mick’s drums – the tribal power – has always been a signature of the band. We’re not going through the motions though, we mean every note we play and every word we sing. We’re a tight unit and the music means everything to us. Anything else is up to you to discern.

Can you tell us about the recording of Bloodline? Was it an easily flowing process?

100%. When we recorded The Madness Continues…session in 2015, we did all 14 tracks in a day. For Bloodline we took a little more time, of course, but the core of each song was still recorded live in our rehearsal room. We’re just comfortable there. Live music, a little overdubbing, and then vocals. Then of course we have an excellent producer in James Reid, who does the mixing. Mick sits with him for the most part and he’s got an excellent ear for texture, but it definitely flows.

The rhythmic adventure of the songs with Bloodline is for us addictively invasive, bound in almost tribal persuasion as you just mentioned, and more than matched by the web of sound round them. Mick and Karl have an instinctive understanding it seems, creating a tempting core for the goodness. How did the songwriting work for the album; those dramatic rhythms first, suggestive melodies, or variety of things breeding what it offers?

We jam! A lot of bands don’t… sometimes someone brings an idea into the room and we play with it… I try to scribble some lyrics out on the spot when possible. But there’s no definitive method. We just make noise and the best bits start to structure themselves. 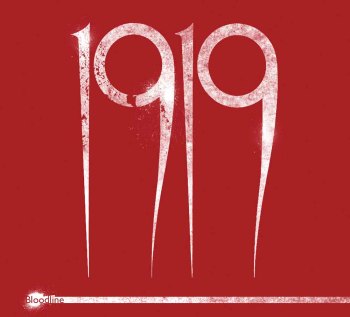 Can you give us some background to the themes within Bloodline?

The label called it “the soundtrack to the end of the world” in their press release. I like that.  There’s a lot in there really… Life, death, environment and architecture, violence, peace, power, philosophy, representation… a touch of nostalgia. There’s a political element, sometimes abstract and sometimes more direct. But I won’t feed you the minutiae. I prefer to leave room for interpretation.

You have also released a great video for the album’s title track. It was created and filmed by Carl Arnfield of Chalkman Video, the producer of a string of striking videos and films. What brought you guys and him together?

He’d done a video for The Kingcrows which I liked – they’re friends of mine and put me in touch with Carl. He’s done all of our videos now and there will be more collaborations with him without a doubt. We do butt heads occasionally, but only because he has such an artistic vision for his work. He’s in it for all the right reasons and a real asset to be able to call upon. He’s also a top bloke and worked his socks off to get the C.O.T.A video out in time for Mark to be able to see it. Can’t recommend the guy more highly.

It is hard to imagine your emotions as Bloodline sees itself being devoured by fans and lauded by so many,  your proudest moment musically?

Mick: John Peel too. When he announced he was going to bring 1919 in for a session I couldn’t believe it. To have done two of them will always be something I’m proud of.

Rio: The first time we played Paris (at Le Klub). The power blew in the middle of the set… it felt like the building was going to collapse during the rest of it. It was perfect.

Once again my biggest thanks. Anything you would like to add?

Just some words from our Captain:

The glow distilled into exploding fireflies

I am dazed and even confused

But I realise that I love this life

The electricity overwhelms me

Read our review of Bloodline @ https://ringmasterreviewintroduces.wordpress.com/2017/03/06/1919-bloodline/