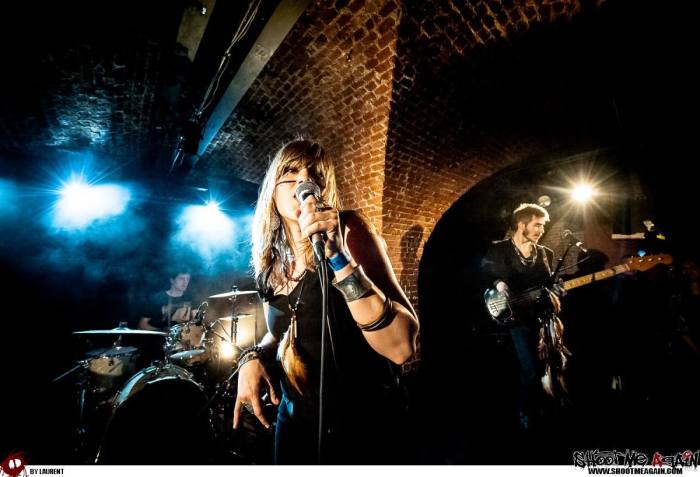 We were aware of the buzz building up around Belgian band Black Mirrors so eagerly anticipated checking out their new EP release with Napalm Records. Fair to say that Funky Queen more than lived up to the praise gathering around its release, revelling in the myriad of flavours behind its bluesy rock ‘n’ roll. Offered the chance to find out more about band and release we fired questions at vocalist Marcella Di Troia and guitarist Pierre Lateur.

Hi guys and thanks for talking with us.

Firstly can you give us the background to Black Mirrors; its beginnings and how you all met? 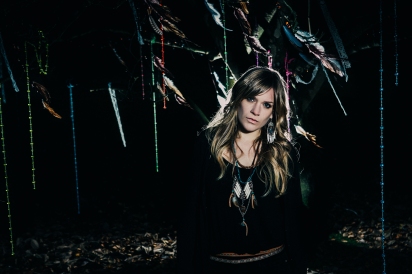 Marcella: During summer 2013, I wanted to create a female band. I found a drummer and a bass player but found it difficult to find a female guitar player. I was looking for someone who could play like Pierre the actual guitar player. I was fond of his sound. I couldn’t find a girl who could do that. So, I asked Pierre to join the band. After some jamming, we wanted to work harder and to start to write our own songs but the girls didn’t have time to invest in the project. So we forgot the idea to have an (almost) female band and invite two old friends, Gino and Edouard to join the band as bass player and drummer. We used to play with them in other bands before Black Mirrors.

We recorded our first EP and did our first gigs with this line up late 2013.

Marcella: The name Black Mirrors came up with the TV show Black Mirror, a really cool English series which shows how technology is progressively changing our world. People are more distant to one another by being connected to the virtual world. We do not want to judge anybody, it’s just that we are witnesses of that change in our society and it touches us.

You sound is seemingly bred in garage rock but, as your new EP Funky Queen shows, flames with much broader rock ‘n’ roll diversity. What are the kinds of inspirations which have lit your musical imaginations most prominently?

Marcella: All the bands we are listening to were influenced prominently by blues masters such as Bessie Smith, Leadbelly, Robert Johnson, BB King, Muddy Waters, Blind Willie Johnson… So I would say the blues.

Pierre: Apart from the blues, we have a lot of different influences like the stoner scene, the late 60’s and early 70’s rock music like Jimi Hendrix, Led Zep, Janis Joplin and even the early Pink Floyd, the revival scene like The White stripes, Rival Sons and The Black Keys, some elements of soul/funk music and a bit of desert-blues like Tinariwen.

The Funky Queen EP has just been released through Napalm Records; how did that link-up come about?

Marcella: During summer 2015, we were invited to play in Germany at «Out and Loud» festival. Napalm was there as they opened the festival with a Napalm label night. Some of Napalm’s bands played there and they found us a slot to play. That was our first contact. We stayed in touch with them for a year and last summer we sent them our new songs. They liked it and Napalm offered us a deal. 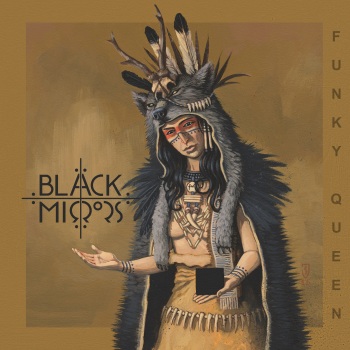 It is being described as the band’s debut EP but am I right in thinking it has a self-titled predecessor released in 2014 which new fans to the band will want to know about?

Marcella: Yes, you’re completely right! Three years ago, we released our very first EP. We recorded it a couple of months after having started the band because we wanted to play live shows as soon as possible. This first EP is now sold out.

How would you say the Black Mirrors’ sound has evolved over its first handful of years?

Pierre: The basic sound didn’t change that much. Since the beginning, we wanted to create a music which will be a mix of all our influences. In 2013, our songs were already a mix of blues/rock, stoner and a bit of psychedelic music with a vintage approach.

But if we speak of the sound more specifically, the guitar sound became wilder with the years and our first drummer left the band. He was replaced by another one who came with his sensibility, approach and specific sound. So these two elements influenced a bit the final result.

With all artists, there is a specific intent fuelling their first steps. What was the driving force for Black Mirrors?

Pierre: Nothing more than being happy and thankful to play together. We are friends for such a long time and we’ve started the band to enjoy creating music together. We never had a big statement like « We want to play this kind of music, like very pure blues or a specific kind of stoner. » It was always about playing anything we had in mind without thinking too much. Maybe it’s the reason why there’re a lot of different influences in our music.

Listening to the EP there feels like there is a strong collaboration between the band in its songs birth and character. How does the band’s songwriting generally work? 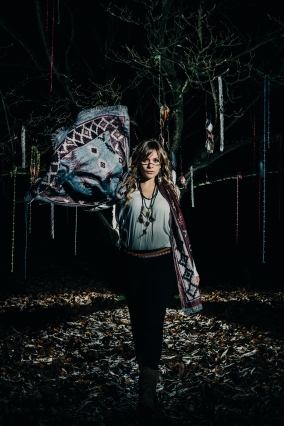 Pierre: Most of the time I create basic ideas like a riff or two and show it to Marcella. We work together on a first version of the song, she composes her vocal part and we work on a basic structure. We show this draft to the band. With them we give the tune his final form. We often create new parts, remove others; jamming around the sound. Because of all this process, the song’s final version is sometimes totally different than the first idea.

Can you give the readers some insight to the background and themes to Funky Queen?

Funky Queen, which opens our EP, is about addiction. Funky Queen is the queen that confronts everyone with one’s own demons.

The second song is Kick Out The Jams, a MC5 cover. We wanted to put it on our first EP as it’s represent very well the general energy of our music.

The Mess is a song about messy feelings you get after you broke up a very bad love relationship. Sometimes, you’d rather not see things than to be destroyed for your entire life.

And finally, Canard Vengeur Masqué to end up…It is a song who talks about the missing of one of your parents after a divorce, the way you can feel forsaken in this situation as a child.

Funky Queen has a great cover to match its sounds. Who is behind the artwork and indeed the band’s excellent logo?

Pierre: It’s Sebastian Jerke, a German artist who worked with My Sleeping Karma and Colour Haze to name a few. We really like his job. We got in touch with him and he appeared to have several great ideas for the artwork.

Apart from the likes of Front 242, dEUS, Soulwax, Enthroned, Triggerfinger, Steak Number Eight, and the excellent King Hiss, I cannot say we know too much about the Belgian rock scene. It is a healthy place right now, especially in its underground?

Well, it depends if it is in the French speaking part of Belgium or the Flemish part. We think Flanders gives more chance to underground music. Just by seeing bands you named, most of them are from Flanders. We are coming from Wallonia where the rock scene is a bit shy. Unfortunately, you barely see a rock band as highlight on a festival poster in Wallonia.

What is next in the immediate future of Black Mirrors?

Going on tour with Horizont and ’77 and record our full length album.

Once again our big thanks for sharing your time with us.

Check out our review of Funky Queen @ https://ringmasterreviewintroduces.wordpress.com/2017/03/03/black-mirrors-funky-queen/