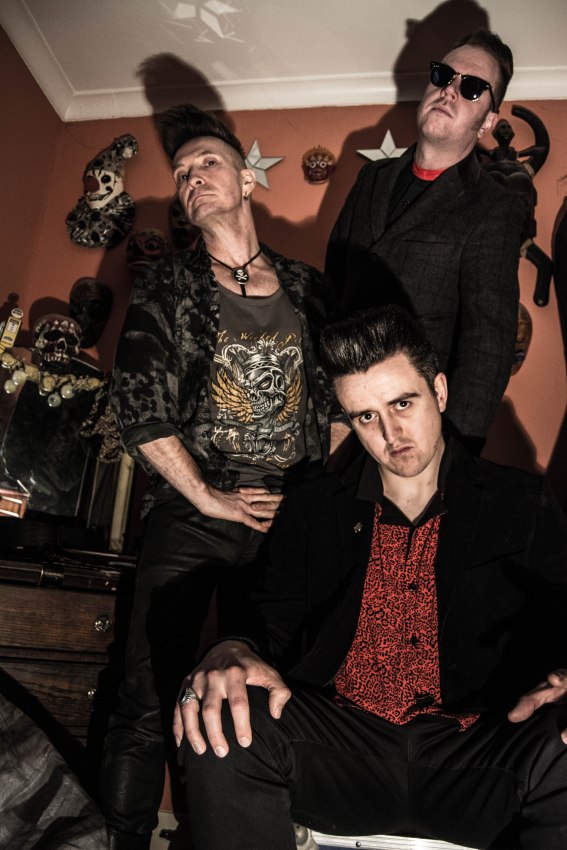 It might not always have been openly declared but there is no escaping that British cult rockers, The Hangmen have been an inspiring force on the underground psychobilly scene since the early nineties and the first of seven greedily devoured and increasingly lauded albums. They defy, nay violate accepted musical conventions and expectations in attitude, deed, and sound whilst creating a blend of psychobilly and garage punk which only inspires in its uniqueness and irreverence; the evidence in the sounds escaping the imagination of bands like Dick Venom and The Terrortones and Dedwardians whether from direct or third hand inspiration. Now the trio return with a new three track infestation of body and psyche, an irresistible trespass sure to have even more willingly swinging from their creative gallows.

This new studio material has been a long awaited incitement, anticipation hanging on since the release of seventh album Cacklefest! in 2007, though there was also the rarities collection of Exhumed & Groomed to drool over three years ago. It has been fresh dark Hangmen swing fans have yearned for though and Necronomicon more than delivers. It is the most predatory and creatively deranged adventure yet with the threesome of vocalist/guitarist Loz Firewalker, bassist/vocalist Leapin’ Lizard Phillips, and drummer Dyin’ Ryan and with all its songs taken from upcoming full-length Hells Vagina, The EP is a salacious teaser of hell bent rock ‘n’ roll at its most deviously compelling. 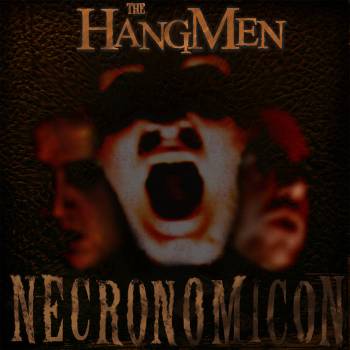 The EP’s title track is first up, its homage to cult movie gem Evil Dead pure invasive theatre. From its initial piano cursed fingering of the imagination, the track twists into a predacious stroll with infection seeping from every pore. Swinging beats and a heavy rapacious bassline courts the senses whilst a seductively nagging hook teases, Firewalker barging in with his vocal roar as raucously backed by the vociferous tones of Phillips. Dragging the listener into its transfixing hellbound realm prone to caustic expulsions, harrying them with a gloriously plodding prowl, the track reveals itself as raw virulence cast in something approaching The Cramps meeting Th’ legendary Shack Shakers as The Orson Family add their incestuous lures ultimately emerging as a depraved invasion all of the band’s making.

The punk stomp of Collarbomb keeps the pleasure as lustfully inflamed, its own naturally mischievous and virulent swagger rapturous bait alone only matched up by the spicy grooves and fifties seeded boldness fuelling its persistently dynamic and insatiable two minute epidemic.

It is fair to say these ears and appetite were fevered by the end of the pair and only ignited again by closer The Great Brain Robbery, the song managing to find an even rawer toxic majesty to its clamour. Driven by a forceful strut with bedlam in its arsenal, the track as its predecessors swiftly gets under the skin incessantly ravishing the senses with its instinctive and inventive babel.

Necronomicon is the kind of treat for which any length of wait can be accepted while providing a taster of a release which will be even more desperately anticipated from this point on.

The Necronomicon EP is out now through Moon Skull Records on 10″ vinyl and download @ https://hangmen666.bandcamp.com/album/necronomicon-ep