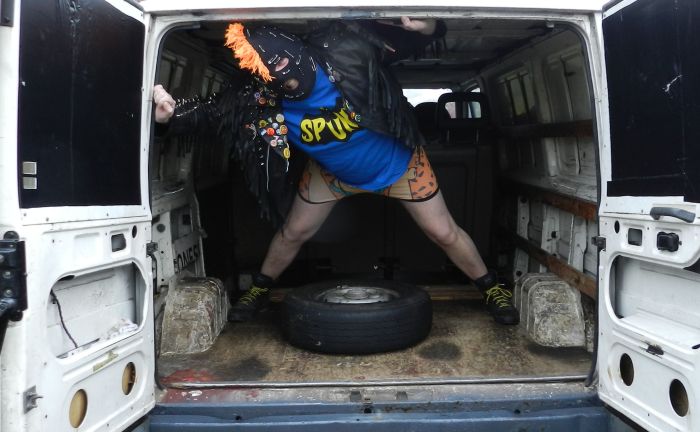 As if the early excitement of 2017 could not get better with the release of the new Dirt Box Disco album, it undoubtedly did with news of a new EP from DBD guitarist and his cohorts, Spunk Volcano & The Eruptions. It was a year ago that the band released their acclaimed second album Shit Generation, though it seems only a couple of months back thanks to its constant airing in the offices. It and the band’s punk rock rebel rousing firmly set the band not only as a wholly different proposition to Spunk’s ‘day job’ but on the British punk scene full stop. Ram Raid cements that uniqueness whilst revealing the most aggressively raucous and virulently dirty sound from the band yet.

Ram Raid also sees new guitarist Stu Page alongside lead vocalist Spunk, fellow guitarist Tom ‘G Force’ Batterbee, bassist Deadbeatz Chris, and drummer Maff Fazzo, the latter pair also part of the DBD devilry. With the band in the midst of a run of live stomps sure to confirm the band’s reputation as one breath-taking and bruising live proposal, Ram Raid simply brings a fresh incitement and spark to the UK punk scene.

Its title track opens things up, almost stalking the listener from its first breath as its predatory riffs and imposing rhythms prowl the senses. Having sized things up it bursts into a muscular stroll with Black Flag like animosity and the infectious aggression of The Damned.  As already established over previous releases though, SV & The Eruptions embroil ears and imagination in their own unique exploits, an enslaving rather than inviting chorus demanding participation as riffs and rhythms trespass and punish the senses respectively. It is one thrilling encounter, an outstanding start to the EP which already has itself and listener all fired up.

There is no moment to calm down either as the belligerent punk rock of Stop Looking At Your Phone roars in ears, its antagonistic charge and dispute irresistible. It is a wall of sound and protestation, a torrent of violent riffs and equally uncompromising rhythms driven by the vocal antipathy of Spunk and the band. At barely a breath over a minute in length, the song is like being given the juiciest steak and only allowed one bite before it is whipped away, but what a mouthful it is.

Hanging Round The Shops is a collusion of punk and hard rock with a metallic lining and just as vociferously seductive and uncompromising as those before it.  It also has a pop punk devilry to its swinging grooves and lusty chorus; body and throat swiftly enjoying subservient participation before sharing just as much zeal with the contagion fuelled clamour of I Think Her Name Was Tracey?

The two tracks alone, but just like the EP, have something for all rock ‘n’ roll fans; whether of bands like Dead Kennedys, The Ramones or UK Subs, Turbonegro or Motorhead, indeed even New York Dolls to Gene Vincent there is plenty to relish. Ultimately it is punk rock at its voraciously ballsy best as proven one final time by EP closer Snap Backbone, a seriously catchy and tenacious slab of hook lined rip-roaring enticement.

Though only five songs running at twelve minutes, Ram Raid is the band’s most stirring and rabid yet rounded creative howl yet putting so many others and their offerings firmly in the shade.

The Ram Raid EP is out through STP Records on March 31st with pre-ordering available @ http://www.stprecords.co.uk/page3.htm