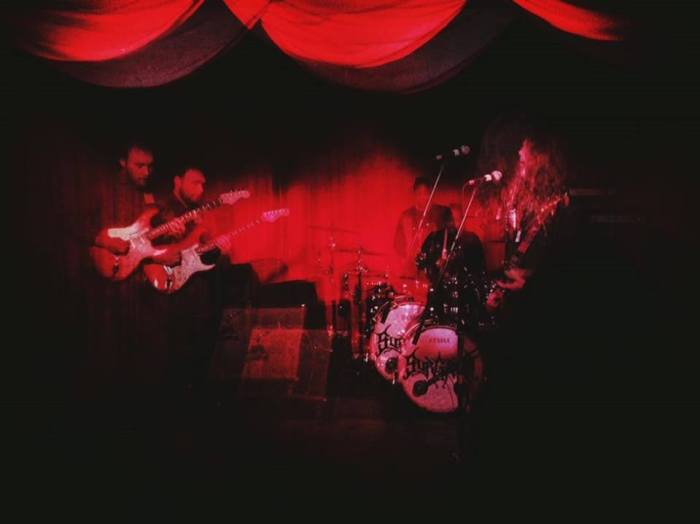 Listening to Chassit from US trio Heavy Temple is like staring into a fire. At the heart of both, there is a siren like lure transfixing and drawing closer attention; a physical and imagination sparking coaxing soaked in danger and magnetism as suggestive images dance in its flames. Heavy Temple’s creative pyre is an aural blaze of psych/doom with a blues fuelled roar within a fuzz loaded proposal; a dark realm sizzling with warm sonic seduction and heavy visceral trespasses on body and psyche. It is also behind a rather fine quartet of tracks making up the attention demanding Chassit.

Opener Key and Bone swiftly lays a raw fuzzy hand on the senses, backing it up with just as muggy scuzzy grooves as High Priestess Nighthawk’s voice melodically roars. With the weight of song and emotion packing the leviathan crawl of the rhythms, the track is as captivating as it is intrusive even when slipping into a low key oasis of intensity, that the prelude to a rousing surge of stoner inflamed rock ‘n’ roll. Built on open strands of individual prowess and craft, the song is a weighty proposition full of ravenous intent mixing searing beauty and bestial rapacity. 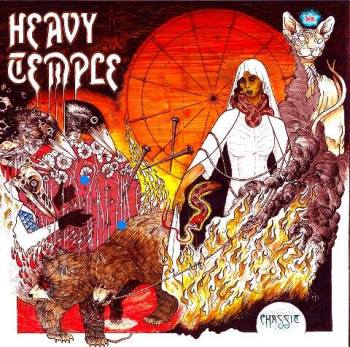 The following Ursa Machina is an even more imposing and tempestuous affair. Its doom bred heart instantly crawls over the listener yet in its air a smouldering melodic heat resonates with suggestive, devilish eroticism. That siren like comparison is no more apt than here with High Priestess Nighthawk’s tones the beacon coaxing ears from within the track’s haze lit predatory rocks. From its bewitching start, the song lumbers with a raw seductive swing, its carnivorous creative bones prowling the senses and imagination as vocals heartily croon. As with its predecessor, the song’s landscape is an evolving adventure, uncaging new energies and inventive gaits to match its fuzzily flickering canvas of sound.

Pink Glass provides sludgy throat searing liquor next, sharing intoxicating melodies and woozy grooves as bass and drums swagger with irritable intent through ears. That alone is enough to ignite the passions but only a taster as lustier reactions meet the surf rock lined lure of calm and suggestion which rises midway. As minimalistic as it is, the passage has thoughts and appetite aflame with its sultry noir lit blues croon before, from its simmer, the track flares up again, catching ablaze with scorching grooves and attitude clad bass grooves aligned to SirenTempestas’s swinging beats.

Closing track In the Court of the Bastard King is instinctive rock ‘n’ roll clad in Heavy Temple’s fervid scuzz blessed sound. The instrumental is a rousing, spirit sparking stoner/psych dripping stomp which just hits the spot on every level while providing a glorious end to an increasingly enjoyable release.

There is freshness about Heavy Temple which alone picks them out from the crowd and with their inventive craft and the heartiness of their music; they are a band destined for major attention.

Chassit is released January 27th via Van Records with its cassette version out through Tridroid Records.

Like Loading...
‹ Snarling from the inside; talking Threatpoint with guitarist Threatpoint Alex Olivetti
Discomister – Cool Is Dead ›