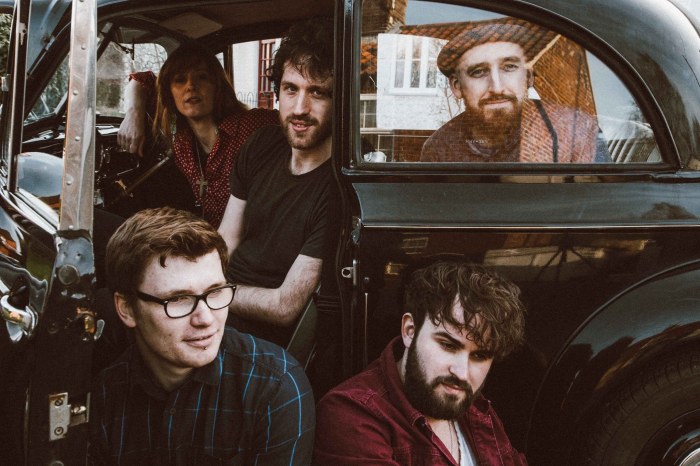 A lingering caress of melodic and harmonic captivation is probably the best way to describe the alt-country of UK band Morganway, certainly on the evidence of their current EP and the single it is about to bear.

Hailing from “North Norfolk’s rural outback”, the Norwich quintet create a proposition which feels familiar, like an returning friend, yet still stands boldly apart from most other proposals. New single Ain’t It Just is the perfect example, a warm and engaging seduction which almost deceptively is also one rousing incitement for body and spirit.

Formed by twins Callum (acoustic guitar, lead vocals) and Kieran Morgan (lead guitar), Morganway is completed by Yve Mary B (lead vocals), Matt Brocklehurst (keyboard), and Simon Tinmouth (drums). With its raw smouldering Americana air and kaleidoscope of harmonic suggestiveness, debut EP No Tomorrows made an instant attention grabbing impact, drawing comparisons to the likes of Fleetwood Mac, The Strokes, ELO, and The Magic Numbers since its unveiling last year. Its success is poised to be backed and pushed by the release of opening track Ain’t It Just as the band’s new single, a song which stirs ears and heart with inevitable success.

Ain’t It Just opens with an immediately emotive air and strum of guitar; a warm enticing swiftly bolstered by the transfixing tones of Yve Mary B and the poetic nature of the accompanying melody. With gentle rhythms alongside, the song wraps its tender thoughts and enterprise around the ears, still hiding the anthemic prowess in the depths of its already catchy character. Once freed, the rousing infectiousness bewitches hips and imagination alike, the song blossoming into a melodic roar which still embraces its opening elegance and reflective charm.

Its touch is a memorable temptation which for those new to the band is echoed across the No Tomorrows EP with the compelling Hearts Of Fire a matching energetic crescendo of invention. Backed by tracks like it’s title track and the Fleetwood Mac spiced Baby, Let’s Run, both similarly infectious affairs, all help reveal a broader character of the Morganway sound which can only blossom further ahead.

Ain’t It Just is released January 6th with the No Tomorrows EP out now and available @ https://morganway.bandcamp.com/releases