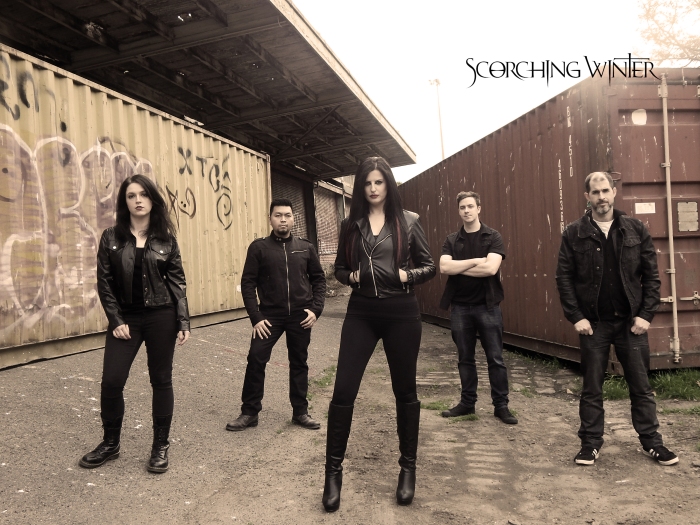 They may have started out with a hard rock sound and be tagged as such still but Australian band Scorching Winter confirm on new album Victim that their music works from a much broader palette of flavours. Strands from progressive and heavy rock to gothic and melodic metal are woven into a sound and release which may not always be the most unique but is persistently fresh and marks the Melbourne quintet out from the female-fronted rock crowd.

Formed in 2012, Scorching Winter released their first pair of singles, Leap and One You Left Behind the following year building on their awareness earning success with subsequent single The Change. 2015 saw the release of the band’s first EP Peripheral and the first signs of a broader body and imagination to the Scorching Winter sound, an evolution in full swing within Victim.

Victim is an eight track concept album about “a girl who is raped and beaten by a group of men but was saved by a demon who gives her powers to get revenge. However, nothing ever comes for free as she would later find out.” Divided into eight chapters, it opens up with The Six Headed Beast and an innocence graced keys cast melody. A portentous atmosphere brews around it, perpetually growing as the narrative unfolds and rhythms bring their predatory threat. In full flow as the chase is on, riffs and beats impose and trespass the senses, venomous melodic strands of guitar adding to the fear carrying drama led by those rapacious rhythms amidst which, a bass threateningly grumbles. The swiftly impressing tones of Konstantina Papadimitriou temper the darkness but act as a uncomfortable spotlight on the transgression within the song. Ending as gently as it starts but this time soaked in angelic melancholy and pain, the track is an excellent start to the album, a lingering moment which sets the atmosphere for the whole release. 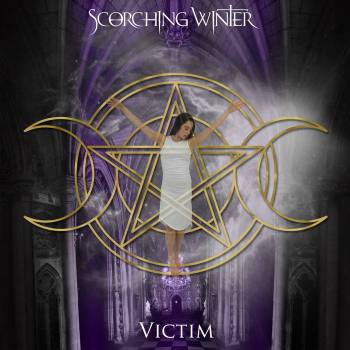 On Hands and Knees follows bringing demonic support as the guitar of Rafael Katigbak casts another suggestive web over ears backed by the dramatic touch and beauty of Natalie Bellio’s keys. The bass of Glenn Treasure adds its heavy emotion to the emerging song as the beats of Nick James land with firm restraint, Papadimitriou’s voice and words echoing the despondency and also the hint of a fight back beginning to be nurtured within the girl. With rising crescendos of rigour and inner anger, the track blossoms into a tapestry of melodic and emotive enterprise, its varied textures bringing new essences to spark the imagination before From the Ashes realises that hinted at defiant heart with tenacious grooves and senses resonating rhythms. The infectious melodic prowess of voice and guitar make an easy recruitment of ears as keys imaginatively sigh and the bass prowls. Light and dark, submissive and aggressive, the track is a snare of creative drama providing a new high point for the album.

Through the predacious cinematic fight back of The Hunt and the reflective repose of Hiding in the Shadows, album and story continues to entice ears and inspire the imagination; the array of inventive textures and flavours involved in the two songs alone as potent and impressing as the instrumentation involved in bringing powerful songwriting to life. The second of the two is especially impressive, almost majestic in its character and composition to eclipse those around it.

Wrath follows, demonic tones opening the piece within another dark climate before the track uncages a consuming surf of riffs and rhythms; venom seeping from every texture within the metal bred tempest as the melodic beauty of Papadimitriou incites the senses. As its protagonist is nagged by the devil, so the senses are by the surging body of the song with its constant tide skilfully ebbing and flowing with variable intensity. As its predecessor, the track is creative theatre as lyrically enthralling as it is musically striking.

The album is completed by firstly Devil in the Mirror, another suggestively cinematic piece with Bond/cold war espionage spiced melodies sold with acoustic beauty, and finally My Gift, My Curse, where acceptance of the girl’s two faced fate is potently cast by keys and guitar alone. With a Celtic touch to its already enthralling character, the song is a fine end to a thoroughly enjoyable encounter.

Though it is a striking proposition on the first couple of listens, Victim only grows and blossoms overtime. It is not the perfect release, what is, but any issues soon pale against its open qualities and an imagination within the band as ripe as the sounds it inspires. Victim is a formidably promising debut album from a band which can only ascend to bigger and bolder heights.

Victim is out now across most online stores and @ https://scorchingwinter.bandcamp.com/album/victim-2

Check out our interview with guitarist @ https://ringmasterreviewintroduces.wordpress.com/2016/10/14/beauty-and-the-thorn-exploring-scorching-winter/