Raw and defiant, unashamedly honest and forthright, British trio Skinny Girl Diet have a sound and heart bred attitude which refuses to pull its punches or tow the party line lyrically or musically. It is a combination which roars with anger and informs with uncompromising zeal and now fuels a debut album which just demands attention. Heavy Flow is a punk infused slab of grunge confrontation as lo-fi and rapacious as it is often melodically engaging and masterfully seductive; an incitement for ear and thought which perpetually hits the spot.

Consisting of sisters Delilah and Ursula Holliday, vocals/guitar and drums respectively, and their bassist cousin Amelia Cutler, London hailing Skinny Girl Diet has increasingly been talked about and covered over past years with Heavy Flow according to the band “a body of 6 years of work”, adding “it’s basically us as a band in its entirety.”

From it’s in the face cover featuring the ladies clad in white dresses inflamed by the natural showing of periods, Heavy Flow invades the senses with assertive pride and confrontation. Its songs are emotionally intensive flying in the face of suppressive attitudes towards women and numerous other injustices shaping the world.  It is a roar of frustration and uncaged ire which stirs up air and emotions from its first breath.

Opener Comedown Intro is a sonic entanglement of solemn nicely caustic guitar alongside an alignment of a pulsating bassline and crisp beats courted by enticing harmonies. Its relatively brief coaxing leads the ears towards the awaiting antagonism of Yeti, the band’s recent single. With a tinge of The Distillers meets Babes In Toyland to it, the track rumbles and grumbles on the ear while encasing it in sonic toxicity and vocal dispute as feverish twists add to the rousing melee. 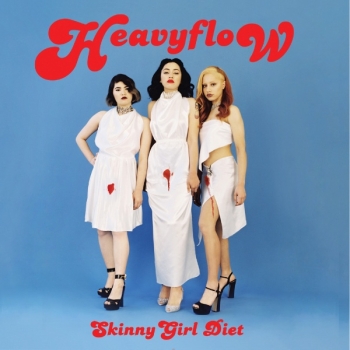 It is an outstanding full start matched by the musically more even tempered Okay. Instantly catchy with its low key but virulent stroll, the song soon brews up a tempestuous climate around the increasingly engaging tones of Delilah, further switching and embracing the contrasts across its forceful endeavour. As its predecessor and those to come, the track is a lyrical poke which makes you stand back and think even as the imagination is eagerly accosted and beguiled by its twists and turns.

The scuzzy touch of next up Lazy Eye is impressively tempered by vocal harmonies which manage to snarl and seduce simultaneously while Eyes That Paralyse is an invasive rock ‘n’ roll grievance deceptively and cantankerously anthemic. The first of the two unites the rasping prowess and causticity of guitar with a kinder caress of vocal and melodic provocation, the second the raw emotion of voice and sound to an abrasive smoulder, both further igniting ears and an already lively appetite for the release.

Already noticeable is the imaginative structure and enterprise of the band’s songs within their ever scathing provocations, next up Bored the most bold yet with its wandering bass twang and sonic espionage around the primal beats of Ursula and Delilah’s standoffish vocal trespass. The song is a riveting tapestry of multi-flavoured adventure, as punk as it is grunge and noise rock seeded as it taps into another exciting aspect to the band’s songwriting and imagination before the corrosive punk ‘n’ roll of Wolf Pack just preys on the senses.

Another pinnacle within the loft heights of Heavy Flow is forged by the acerbically grooved and voiced Silver Spoons, the track a fuzz ball of emotionally trenchant, sonically bracing discord which just sparks within ears. Its unpolished beauty is contrasted by the warm clarity bringing successor Fix Me into view, its mellow calm breeding a Breeders toned predation subsequently bringing stronger turbulence to the song’s captivating atmosphere.

Through the venomously contumacious Pretty Song and the punk familiarity of DMT, Skinny Girl Diet reinforce their command of ears and a hunger for more, the second of the two arguably the album’s least unique track with its Hole/L7 like swing but as addictive as anything involved in the success of Heavy Flow.

The biting shimmer and growl of Forget equally stirs the passions with a far more inventive design soon taken further within the stormy majesty of Wasted Smile, a track which baits the senses with melodic and emotive elegance and within the flicker of a twist unleashes a blaze of sonic and rhythmic raging upon them.  It is a superb end to the album with Comedown Outro providing a melodically raw epilogue which only urges a need to press play all over again.

Heavy Flow impresses on first listen but truly grows and inspires with further investigations. It might not be declared the best album of 2016, though it just might too with a great many, but Skinny Girl Diet has provided one of the more important propositions to be embraced.

Heavy Flow is released November 4th; self-released in the UK and through HHBTM Records in the US.