Norm And The Nightmarez – Psychobilly D.N.A. 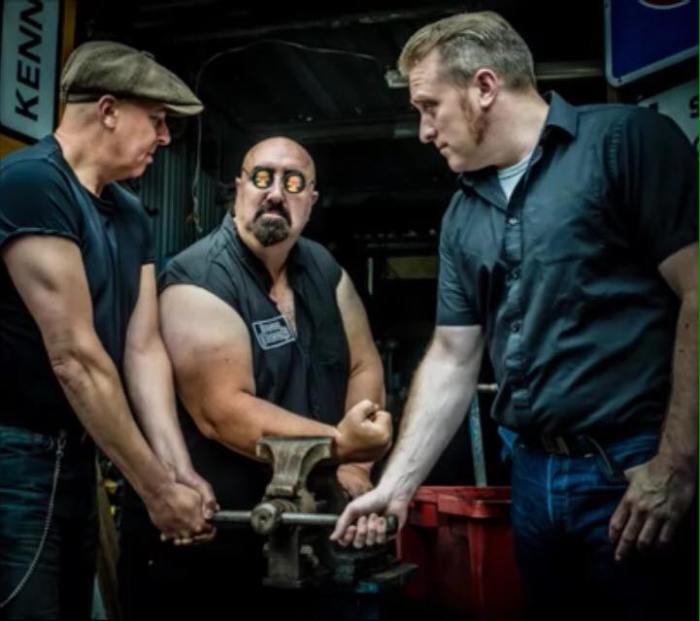 After the stomping triumph of their debut album two years ago, anticipation here for a successor from Norm And The Nightmarez was always heading towards the lustful side. Psychobilly Infection was a devilish treat of the trio’s distinctive multi-flavoured psychobilly; a rousingly virulent bout of “wickedly contagious and warped rock ‘n’ roll” which Psychobilly D.N.A. has now only gone and eclipsed.

The Norm And The Nightmarez sound is a magnetic blend of old school psychobilly drawing on and infusing the heart and creative blood of early day and beyond rockabilly and rock ‘n’ roll. Formed by guitarist/vocalist Norm Elliott (Mickey & The Mutants/ Phantom Zone/ The Bionic Krugerrands), the Birmingham based band’s line-up is a fluid proposition around the core of Norm and his lively and imaginative songwriting, as further evidenced by his solo single She last year. For Psychobilly D.N.A., Norm has enticed the striking craft and enterprise of drummer Paul Mummery and double bassist Nile ‘The Rev’ Robbins; a threesome which just feels like they were meant to be as the album sparks the instincts from start to finish.

Inspirations to Norm include the likes of The Meteors, The Cramps, Johnny and Dorsey Burnette, and plenty of artists making up the Sun Records catalogue as well as various rockabilly and psychobilly offerings over the decades. They are essences which proudly and uniquely spice up Psychobilly D.N.A. from start to finish, immediately teasing ears within opener Thank You Very Much. A tribute to Elvis, the track is a contagion of anthemic beats and spicy grooves around Norm’s vocal homage. Within seconds hips are swinging and feet a blur to the lively temptation pouring from the speakers, vocal chords swiftly engaged too as the rockabilly nurtured track provides a collage of stirring enterprise bred by the trio.

The following Misery is just as forcibly infectious, its psychobilly instincts colluding with tangy melodies while being driven by the pulsating slaps of The Rev on darkly taut strings. Vocally Norm is as inviting and potent as his flair with grooves and hooks; it all matched by the eagerly landing beats of Mummery as smile sparking humour fuels the lyrical heart of the encounter. As its predecessor, the song quickly enslaves attention and enjoyment before Bury Me With My Guitar reinforces the album’s already firm hold with swinging rhythms and nagging riffs. A web of inescapable and inventive hooks invading body and imagination like a mix of The Polecats and Tiger Army infested by the spirit of Johnny Burnette, the track is a glorious trespass dictating movement and pleasure with ease. 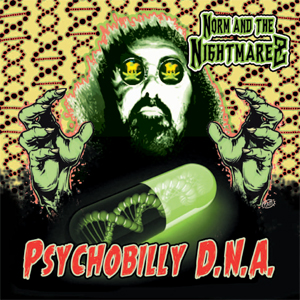 The album’s title track steps up next, providing its own invasive catchiness and irresistible demand on the senses and limbs. The vocal backing of The Rev and Mummery is as sinisterly flavoursome as Norm’s lead as darkly toxic groves and niggly riffs all add with instinct rousing rhythms to psychobilly manna for ears and appetite.

That hunger for the album’s body and spirit ailment is instantly nourished again by the opening of The Sun Burned Down, The Rev’s shadow soaked bass line pure temptation soon joined by just as flavoursome crisp beats and the toxic beauty of guitar melody. Narrating the demise of planet earth, they combine like a final sultry sunset, seducing with portentous beauty as Norm’s vocals echo their apocalyptic radiance.

It Made Me Lose My Mind surrounds the listener next, its rhythmic palpitation alone a delicious infestation infused with the psychotic grooves of Norm while the following and irrepressible Wild Wild Woman carries a great Gene Vincent / The Shakin’ Pyramids groove before the band spice up Voodoo Street with some early Stray Cats sultriness. All three show the variety honed within and shaping the album and its creatively energetic character, a success nailed down once more in the unquenchable flirtation of the sci-fi bred Timeslip where hooks and grooves command as rhythms control whilst throughout Norm takes the imagination on a time defusing romance for yet another impossible to resist defeat of inhibitions.

Old school textures wind around psychobilly seducing for The Devil’s Gate next, its smouldering atmosphere as blood red as the dark moon shining upon is toxic tale. The track is sheer captivation, maybe not quite holding all the sparks of songs before it and certainly of successor Bad Evil Woman, but another treat to devour greedily. It is fair to say that an even lustier response was nurtured by the second of the two, a song offering another chorus which simply demands participation whilst its grooves and rhythmic enticement take swift control of body and intent with not for the first time within Psychobilly D.N.A., a touch of Leiber and Stoller like spicing colouring the songwriting.

As shown by previous releases Norm also has a handy knack at composing instrumentals which grip the imagination with their suggestive characters and melodic endeavours, Lynch Mob another fine example with it’s on the run intrigue and creative espionage. With The Rev and Mummery simply compelling too, it is an easy to get lost in adventure passing keen attention over to the fifties spawned Love You Little Baby, a scintillating track anyone like Eddie Cochran, Sweet Gene, and Link Wray would embrace in their discography.

The rhythmic voodoo of Night Fever is enough alone to send the passions into ecstasy next; the song blossoming into a boisterous bout of mouth-watering fiercely enterprising psychobilly equipped with feverish grooves and passion ensnaring hooks as rhythms cast a relentless tapestry of temptation. The track is superb but still overshadowed by the album’s outstanding closer.

To Victory is a canvas of battle strewn valour and destruction; a bold romance of bravery treated with honesty and reality as basslines eagerly prowl and beats scythe across the sonic and vocal dexterity of Norm. It is a glorious end to an album which infests every aspect of the body and emotions to leave instinctive and unbridled pleasure in its wake.

Norm And The Nightmarez might by primarily tagged as psychobilly but trust us, their sound and certainly Psychobilly D.N.A. is something any heart for rock ‘n’ roll in its various broad flavours over the decades will beat excitedly to.

Psychobilly D.N.A. is out now via Western Star Records on CD @ https://western-star.tmstor.es/cart/product.php?id=30216