The Last Ten Seconds of Life – The Violent Sound 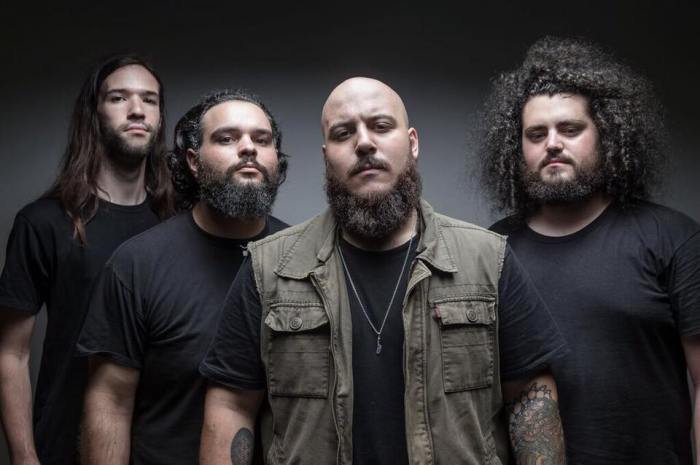 Having beat up on and seduced the US metal scene, Pennsylvania hailing The Last Ten Seconds of Life are abut to do the same to a global attention with new album The Violent Sound. It is a success not too hard to imagine almost expect as the release unleashes twelve brutal alternative/nu/groove metal furies that just grip and excite ears and imagination. The band’s sound has plenty more in its arsenal of flavours and temptation but a mix of Korn, Mudvayne, and Britain’s own Anti-Clone is a fair indication to the downtuned tempest the Mansfield based quartet uncage.

Formed in 2010, The Last Ten Seconds of Life has risen through the local and national US metal scene, earning a potent reputation for their fearsomely impressive live shows and releases like debut album Know Your Exits of 2011. The past year though has seen the band evolve their sound into a whole new and striking adventure with new vocalist John Robert C. coming in, his irritable grouchy growls and impressive broader versatility seemingly, on the evidence of The Violent Sound, just bred for the band’s evolution in songwriting and imagination.

Engineered by Grant McFarland and produced by Carson Slovak (August Burns Read, Texas in July), The Violent Sound is the first offering from the new line-up and pretty much goes straight for the jugular as Little Black Line opens things up. Its initial lure though is the clean tones of John Robert, enticing within brewing discord honed tempestuousness which blossoms into a predatory stroll that as good as stalks the senses. The harsh rhythmic tenacity of drummer Christian Fisher is bound to the barbarous groove and tone of Mike Menocker’s bass, both a formidable invasion of ears as the guitar of Wyatt McLaughlin creates a sonic smog of portentous temptation.

Though the song never brutalises, its intent and weight takes no prisoners, setting the listener up for the intensive examination of The Drip. That Korn-esque texture to the band’s sound swiftly seduces ears within the encounter, interrupting a primal trespass equipped with scything grooves and vocal antagonism around rhythmic animosity. The track is glorious, another aural predator further impressing in melodically bred moments of emotive resonance before Bloodlust lives up to its name in tone and emotion. It is a savage uncompromising affair but again one with twists into unpredictable and sinister passages which even if only brief draws the imagination further into the violating tempest.

The following Six Feet is just as diverse in its attack and simply imperious, its volatile climate and grievous intensity skilfully contrasted by the melodic and harmonic swoops upon ears; the two colluding in bewitching espionage before the track is back devouring all before. As much death metal seeded as any of the flavours previously suggested, the track is a carnal incitement igniting an already keen appetite with the album’s title track reinforcing its increasing hold. The Violent Sound roars with sonic spittle lying upon vocal ire as rhythms pounce with animalistic predation, a vicious stalking leading to the calmer melodic and cleaner vocal enterprise of the band which is as virulently infectious as anything escaping the crushingly relentless ferocity.

A Marilyn Mansion air accompanies the flirtatious swagger of Casanova, an irresistible track with all the grooved swerves and salacious moves of a venomous pole dancer while Bag of Bones worms into the psyche with a niggling groove prone to discord fuelled expulsions of sonic unpredictability. Around it, the track brews another fury which buffets and abuses the senses, every swipe and incursion eagerly welcomed as the track swings like a hungry hound with a creative deviousness just as eagerly abound within successor Switch, a volatile fusion of metal and heavily boned rock which either licks at the psyche like a demonic lecher or presses in on the senses like a murderous vice.

That sanguine essence is even more prevalent and zealous within next up Blind Faith but equally the band’s harmonic imagination is a rich lure, so much so that you do not know whether to bow to its seduction or run for the hills, the former ultimately the only reaction to the brilliant protagonist.

It is a success and creative endeavour matched by that within Wise Blood, The Last Ten Seconds of Life again creating a concussive, sublimely seductive siege of ears and senses, trapping the imagination with exotic grooves and spicy melodies amidst vocal dexterity before Social Suicide casts a paradox of contrasting textures which simply captivates with ridiculous ease.

With the groove entangled, sinisterly shadowed Last Words completing the ferocious proposition, The Violent Sound is destined to push The Last Ten Seconds of Life firmly into the broadest metal scene. If not, there is something seriously wrong.

The Violent Sound is released by Siege Music on October 21st.