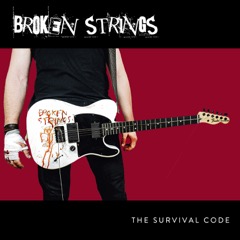 As a teaser for a larger proposal, tracks do not come much more persuasive than Broken Strings, the new single from UK alternative rockers The Survival Code. The lead and title track from the London based trio’s new EP, the song is a web of tangy grooves and spiky hooks delivered with energy and urgency which alone rouses the spirit.

Founded in 2011, The Survival Code was forged in the driving force and song writing of lead vocalist/guitarist Gary McGuinness. Dublin born, he previously drummed in successful alt-rock bands for over a decade before moving to London in 2010 where he subsequently linked up with drummer/vocalist Tom Cook and The Survival Code’s original bassist Pete Agnelli. With a sound inspired by influences ranging from Johnny Cash to the Deftones, the band released the Everything but today EP in 2013 which was followed two years later by their well-received debut album MMXV. As their first full-length, with Chema now handling bass duties, The Survival Code’s new single and EP is released through IRL and is set to be backed by a host of shows across the UK and Ireland.

Broken Strings instantly nags ears with sturdy boisterous beats and teasing riffs; a Deftones meets Reuben feel coating the appetite sparking coaxing which perpetually shapes a song ebbing and flowing in melodic prowess as it blossoms in ears and imagination. The band’s sound has been compared to Foo Fighters before and the single offers sound reasons why, an exuberance and infectious aggression like the Americans fuelling the anthemic roar and dynamic virulence of the song.

Impossible not to get physically and emotionally involved in, Broken Strings is an incendiary spark to a want to grab the new EP from The Survival Code and more…

The Broken Strings single is released September 25th through IRL.