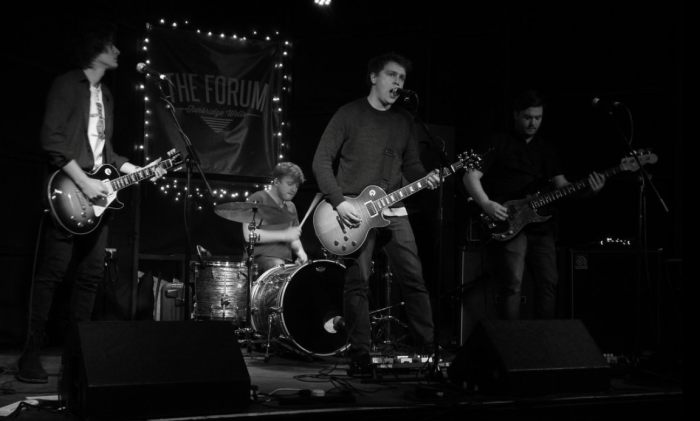 Scarlet Sky is the new single from UK indie rockers Righteous Reprobates, a song which infectiously shimmers and lingeringly jangles from its first touch.

Based in London and Kent, Righteous Reprobates draw on inspirations from the likes of Oasis, Arctic Monkeys, Nirvana, The Beatles, and Led Zeppelin. Openly a nineties Brit Pop flavour escapes their sound, the quartet using it, on the evidence of Scarlet Sky, to spice up an instinctive ability to create an infectious proposal. Certainly the song wears its influences openly; a familiar character to its sound hard to escape but similarly the new single shows all the attributes and invention which has seen the band draw strong attention and radio play since emerging.

From the first breath Scarlet Sky grips ears in its glowing lure of sound, its steely texture and smouldering melodies encasing warm vocals and harmonies as rhythms frame it all with a web of catchiness. The vocals of guitarists Rob White and Jack Griffiths emerge to unite perfectly across the inviting landscape of the track, their fingers equally casting a weave of angular and melodically spicy enterprise with just a touch of the 80’s more mod inspired bands such as Purple Hearts and The Chords to it.

With bassist Jack Collier offering a pulsating stroll through his strings as drummer Charlie Kenny drives proceedings with captivating beats, it all adds up to a highly enjoyable and tasty insight into the anthemic sound and growing imagination of Righteous Reprobates.