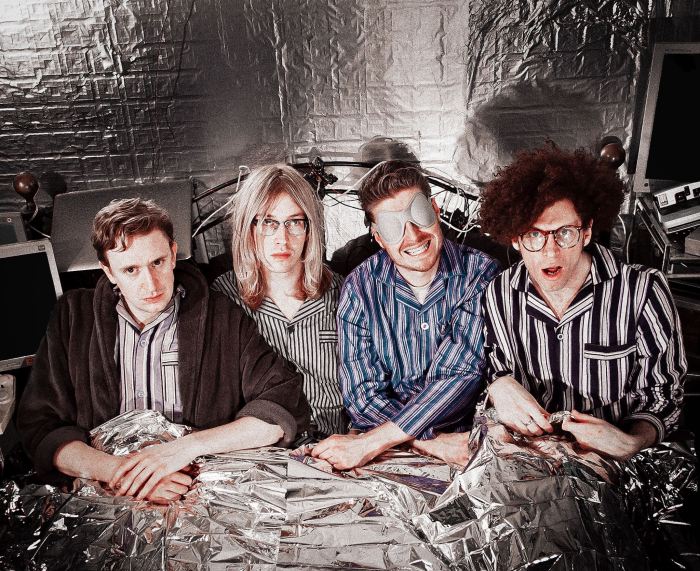 Amongst the most highly anticipated releases this year here in the office, maybe the most eagerly awaited was the debut album from UK sonic punksters Asylums. Having been hooked on the Southend-on-Sea hailing quartet’s frenetic and devilish jangle since being infested by Wet Dream Fanzine EP within the first throes of 2015, a more than keen and impatient appetite has been brewing and now we can say it has been well worth the hours pacing the floor waiting for Killer Brain Waves.

Taking a snap at any and everything with a mischievous smile on their creative faces, band and release is the kind of sonic devilment ears and music were evolved for. Offering twelve tracks which flirt and bite, tease and seduce, with an imagination and eccentricity found in Bedlam, Killer Brain Waves announces Asylums as one of music’s most essential and even more so irresistibly thrilling propositions. It is a collection of songs within which sarcasm and discontent are frequent visitors as too a virulent dose of humour and fun driven imagination. Musically, Asylums recall in heart and enterprise the likes of Swell Maps, The Dickies, and Supergrass. At times essences also remind of bands such as Weezer and We Are The Physics but as shown a dozen times over, all are hues in a devilry uniquely Asylums. 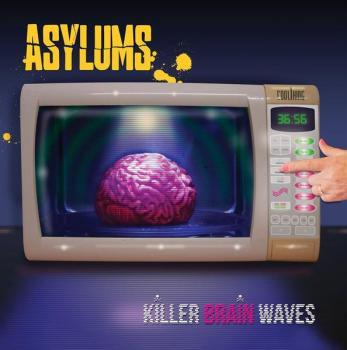 Mixing a handful of treats from their previous EPs/singles with new slices of angular revelry, the foursome of vocalist/guitarist Luke Branch, guitarist Jazz Miell, drummer Henry Tyler, and bassist Michael Webster open up Killer Brain Waves with the mighty Second Class Sex. Its first breath brings a senses swamping tide of meaty rhythms and nagging riffs engaged in a toxicity of sound which simply infests the psyche. Though its spreads its body into a more expansive tempting, that energy never diminishes. Webster’s bass groans and growls in ears; a great lure matched by the swinging intent of Tyler as the swirling sonic seduction of the guitars lay their trap. With vocals just as potent and a touch of White Noise era XTC to the mix, it is a stunning start to the release, and one not losing a beat as I’ve Seen Your Face In a Music Magazine steps up next.

The second track is just as eager to invade body and thoughts, using a lower gear energy wise as a spicy wiry groove entangles ears and rhythms cast in another rousing and pulsating enticement. Melody and discord court the outstanding tone and delivery of Branch, each adding to the glorious trespass with a tangy hook just icing on the cake. New wave meets pop punk to give some clue to its ingenuity, the song departs so Joy In a Small Wage can share its ‘mellower’ charms. The track almost floats over the listener, keys washing its path though equally there is a darker edge in tone and another beguiling bassline to keep song and ears on their toes. That Weezer reference is arguably at its most potent here but again the result is, within a near perfect pop song, something belonging only to one band.

Bad Influence rumbles as it croons next, plaintive vocals and dirty riffs aligning with a heavy bass enticing to create another epidemic of swinging enterprise before the even more magnificent Wet Dream Fanzine leaps in. It is impossible not to join in with every Asylums song, and especially with this gem. Hips and instincts are grabbed straight away by the opening hook and swinging rhythms, vocal chords soon after as Branch leads a jangle of rhythmic agitation and funk infested bouncing clad in another fiercely tantalising weave of Miell’s sonic invention. A favourite since its appearance on that same named EP last year, the song continues to ignite tingles; as too the following The Death of Television. A nest of sonic vipers and stabbing beats, all with rebellious intent in their hearts, the song is one minute and twenty six seconds of creative agitation demanding similarly off kilter movement and involvement in return for its rare incitement.

The heavy punk ‘n’ roll of Monosyllabic Saliva comes next, its body a prowling beast tempered perfectly by the harmonic quality of Branch’s voice. Fuzzy with a thick feel to its atmosphere, the track is a brooding slice of pop rock veined by the ever insistent grooves and sonic tendrils escaping the guitars. Its dark tone is contrasted by the pop punk saunter of Born To Not Belong, a song which feels like it’s an already known friend as it makes its first proposal but simultaneously adds another string to the albums creative harp.

Necessary Appliances soon has ears greedy, the song twisting and turning with a more conservative sound compared to its companions but still unveiling a tapestry of imagination fuelled endeavour before Sunday Commuters and Missing Persons keep the thrills going. The first of the pair is another more controlled slice of pop rock with great sixties inspired harmonies taking the listener on a stroll of excitable rhythms and fuzz lined tempting while the second seduces with its Weezer/Supergrass hued canter around another commanding bassline and crisply landed beats.

The album closes with the outstanding punk raw challenge of Slacker Shopper, a grouchy and thickly aired proposal which as so many just hits the spot. The band’s most aggressive and irritable offering yet, it is a brilliant end to Killer Brain Waves providing a final new shade to their sound and invention, one we hope to hear more of. There is also a hidden track which we will call Butterfly just because the word is repeated most often. It too shows a fresh side to the Asylums sound; imagine the Beach Boys or Walker Brothers doing shoegaze and you get a hint of the great extra gift within the album.

We expected good things from Asylums with Killer Brain Waves but the album simply out does any expectations with ease. For fans and newcomers, Asylums and their first full-length are simply a must.

Killer Brain Waves is our now via Cool Thing Records @ https://itunes.apple.com/gb/album/killer-brain-waves/id1105949093 and other stores.