Stand Alone – Nothing Is Forgotten

As the band play a host of festival dates with an UK tour to follow, Bradford hailing trio Stand Alone have just rebooted their debut EP, Nothing Is Forgotten. Offering five tracks of lively, meaty rock ‘n’ roll, the EP is a highly enjoyable fusion of anthemic roars and rousing choruses with forceful rhythms and mighty riffs.

The EP opens up with False Beginnings, a track which slips in on a fuzzy melody with heavy rhythms close behind. It is a potent start intensified by the strong tones of Stevenson in turn backed by the harmonic voices of Harrison and Durrans. The song continues to tempt as riffs create moments of antagonistic enterprise but never quite ignites, rather smouldering as the craft of the band and a great solo show their prowess. 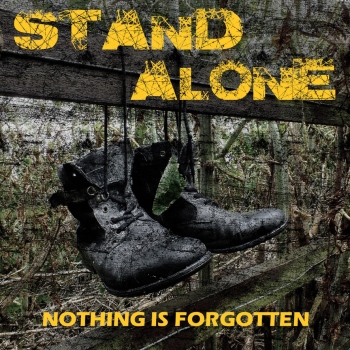 It is a very solid opening to Nothing Is Forgotten quickly eclipsed by This Is Ours with its thicker sinews and grouchy bassline. An easy to embrace hook emerges and leads into a lively chorus with eager voices and melody warm flames which radiate further across the increasingly virulent encounter, every element adding up to a song which alone demands attention and marks the band out as one to watch.

Easier Said Than Done continues the step up in invention and enjoyment, even if it lacks the snap of the last song, though that is to do with the strength of its predecessor than any shortcomings within it. With keys and some enjoyably unpredictable turns within its catchy body, the track captures the imagination with ease, the vocals and melodic invention especially catching the ear.

Things get heavier and more imposing again with Control, the band binding the senses in a web of hooks and spicy grooves around the eagerly muscular swipes of Durrans and another predacious bassline and tone from Harrison. Led by Stevenson, the union of vocals only impresses again before the EP closes on yet another high and the band’s latest single.

Demons is a muscle bound proposal which from an initial rapacious bassline uncages a net of hefty rhythms and growling riffs  which in turn lead to a seductive lure of warm melodies and suggestive whispers. It is a might end to the release and though as all songs there is something firmly familiar to its sound and some of its moments, there is no denying such recognisable hues only add to the rich satisfaction and enjoyment found.

Stand Alone is another band on the rise but yet to discover their individual voice; Nothing Is Forgotten suggests that when they do the British rock scene might have something special on its hands.

The Nothing Is Forgotten EP is out now across most online stores.

Like Loading...
‹ Uncaging the roar: in interview with Fivefold
Bad Case of Big Mouth – Break It to Build It EP ›