Home › Music › A Blue Flame – The Girl Inside of You

A Blue Flame – The Girl Inside of You

Adding to a host of recent singles which hint of potent times for their creators and the releases they are taken from is The Girl Inside of You, the new track from A Blue Flame. Plucked from their latest album What We’ve Become Is All That Now Remains, the single is a thumping slice of rousing songwriting and a melody thick sound with a Brit Pop meets folk rock flavouring and an encounter very easy to get seriously involved in. 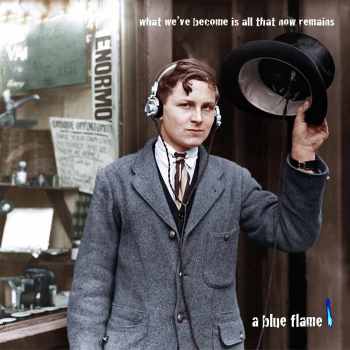 A Blue Flame is the project of Leicester based songwriter, Richard Stone and What We’ve Become Is All That Now Remains the successor to debut album Someone Else’s Dreams Will Fill Our Home which was released in 2013 under the name of Woodman Stone. With its lead song Does Madonna Dream of Ordinary People gaining strong airplay across the likes of BBC 6Music and BBC Leicester, Tom Robinson was one declaring their support, calling Stone’s music: “wonderful unashamed pop music that comes with an inbuilt English Pop sensibility running through to its very core“. The Girl Inside of You is destined to find the same success and more, with What We’ve Become Is All That Now Remains, which features some of Leicester’s best musicians including co-producer Adam Ellis on guitar and Tony Robinson from The Beautiful South on keys and brass, following suit.

The Girl Inside of You strolls in with bold hooks and rhythms aligned to an instant melodic lure. It’s commanding breath relaxes slightly as Stone’s lyrical and vocal prowess works on the imagination but the song’s potency never lessens as creative enterprise and punchy emotion fuelled imagination is added to its web of temptation.

As subsequent smart twists and turns ensure there is nothing predictable about the song, there is something of The Jam in their Setting Sons period spicing to the encounter which as you can imagine does it no harm either. The Girl Inside of You is one of those songs hard to get enough of; one all the while suggesting that a definite look at the album it graces (look out for our review soon) is in order.

The Girl Inside of You is out now with What We’ve Become Is All That Now Remains available 19th August @ https://itunes.apple.com/gb/artist/a-blue-flame/id1078425623 and http://www.cdbaby.com/Artist/ABlueFlame