Home › Interviews › Uncaging the emotional beast: an interview with Owleye

Uncaging the emotional beast: an interview with Owleye

Formed in the late half of 2013, Owleye is a snarling post hardcore roar from Denver. After a potent couple of years across their local scene, last year saw a line-up change and short hiatus with the departure of their previous vocalist. The release of their new EP this past April announced and confirmed the welcome return of the quintet and we seized on the opportunity to talk with the band and find out what makes them tick…

Thanks for having us.

We are Owleye, a post hardcore band from Denver, Colorado. The band started in 2013 with a group of friends DJ (guitar) Brad (bass) and Frank (drums) getting together and wanting to make something new and unique while keeping true to their roots. Myself (Tim vocals) and Dave (guitar) came into the band mid-2015.

Is Owleye your first musical venture and if not have previous experiences had any impact on what you are doing now, in maybe inspiring a change of style or direction?

We’ve all be involved with other bands with different experiences. Having different paths always is super cool cause we can throw so many different elements and styles and blend it into what Owleye really is.

Tell us about the band name.

The band was originally I Will Lie but Owleye was always in the back of our heads so it quickly changed to that.

I mean really we just wanted to play music that is relevant and also very unique at the same time. I mean listening to our new EP No Wounds, the listener will notice every different tone and feel to each song ‘cause they are all similar but different at the same time, it’s really cool.

I mean my vocal style was a lot different than the previous vocalist, so I mean we are pretty fresh still but the overall outlook of the band has evolved tenfold over the past year and with this EP.

Equally since your early days, how would you say your sound has evolved?

I know it is very cliché but we’ve all just matured as musicians and it really shows in our new sound and new music. Even writing now our songs we are working on are growing bigger and more mature.

That change has been more of an organic movement or you guys deliberately setting out to try new things?

Well again with me coming in, I wanted a different sound and wanted to write music that is very comfortable for my vocal style so it was basically starting all from scratch again and trying new things until we were all on the same page.

We are all inspired by different genres and things but we kinda just write how we are feeling at that moment in time. This last EP was me getting a lot of things off my chest that I’ve been holding in for years. So who knows what is to come in the future ha ha.

Is there a regular process to the songwriting?

We kinda just pre pro little ideas and grow off said idea. Being able to hear an idea over and over again in earphones is so beneficial and every band should do it to help them get the best product.

Where do lyrical inspirations more often than not come from?

I wrote a lot of past experiences that have been held over my head for a long time and just trying to find the positive. Sometimes life sucks and I’m just trying to make light of things in my lyrics and find the true beauty that comes with hardships.

You mentioned it earlier, so can you give some background to your latest release?

Our latest release No Wounds is really all about finding ourselves with this new line-up and touches a lot on my past insecurities at least lyrically. It’s struggling with different things in life and trying to find the light of stupid fucking situations.

Every song is pretty different themed with tones and the overall feeling it gives. I mean there are parts where you wanna punch your best friend in the face to the next song that really tugs at your heart strings and makes you want to cry. Cycles especially is really emotional and talks on losing a loved one and trying to grasp that one thing that will stay with you long after they are gone. It’s a very interesting EP for a debut release with so many different sounds, which is real cool.

Are you a band which goes into the studio with songs pretty much ain their final state or prefer to develop them as you record?

I mean we like to do pre-production a lot but really change the song at least 10-15 times before even going into a studio to work with a producer to get the best product we can get from it. I think having the ability to hear things back is the most beneficial thing a musician can ask for. 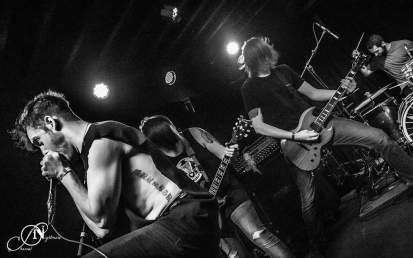 I think what sets us apart from some other bands is our live performance because we go hard in the paint every single time. You can feel the energy during our set where even if you don’t like our music you are going to want to move around just cause we put so much of our souls into every performance.

It is not easy for any new band to make an impact regionally let alone nationally and further afield. How have you found it your neck of the woods?

We are still currently starting to branch out from our local scene to a more national scale and really the only thing we can do or any band for that matter is just work your ass off to get what you want from your art.

How has the internet and social media impacted on the band to date? Do you see it as something destined to become a negative from a positive as the band grows and hopefully gets increasing success or is it more that bands struggling with it are lacking the knowledge and desire to keep it working to their advantage?

I don’t think it really brings anything negative for us personally but that’s the fun thing with social media people really only care about the negative. We are so quick to jump on anyone’s mistake ‘cause you know everyone is perfect but I think if society could easily cut through the bullshit then social media sites could be a positive outlook on everything.

Thank you so much for having us guys, and to the readers we love you so much and thank you for making our lives liveable by allowing us to play music.

Check us out if you haven’t yet and expect to see us coming to your city in the near future!!