The brainchild of Torontonian Mike Liorti, Rosedale is an aggressive pop band which commands attention. Formed in 1989, the band has moved and evolved through numerous personnel and situations, all the time Mike honing the sound and imagination which has lured potent praise to EPs and albums. With thanks to Mike we recently explored deeper into the world and body of Rosedale…

Hello Mike and thanks for talking with us.

Thanks for having me. Rosedale is currently just me. I have different members all over the place but I’ve been solo for almost 5 years.

Have you been involved in other bands before? If so has that had any impact on what you are doing now, in maybe inspiring a change of style or direction?

I’ve produced, managed, and played keys/lead guitar for my friend Alex Baker. We recorded his album January Blues in 14 hours and toured it for a couple months. He’s an incredible artist and has definitely influenced me to keep it simple. I also filled in on guitar/guest vocals for a couple bands that played as my band such as Time and Distance (Charleston, WV) and Your Favorite Coastline (Virginia Beach). Both were very fun experiences. I programmed some FX and lights into their back tracks for fun. And they both taught me a lot about writing even before I played for them and I was just a fan. I also sang vocals on a Disney musical called Radio Rebel. I sing all the vocals for the GGGG’s character, Atticus Mitchell.

The band name came from a street that was on our way to the local music store, L&M. We would walk to that music store almost every day and write songs on their awesome gear. We ended up becoming friends with all the employees and recorded with some of them. So that store and the walks to it represent our roots and where we came from. Still, to this day, I’ve met some of my musicians while checking out music stores, taught parts and sold gear to people in music stores, and we often get people saying “I feel like I walked into the lighting room at Guitar Center” as we’re about to start our set. So it’s safe to say I’ve always been the store rat. And it’s taught me more than a college degree would have. 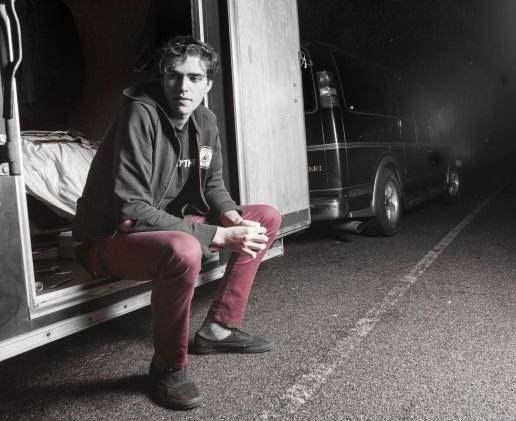 Was there a specific idea behind the forming of the band and also in what you wanted it and your sound to offer?

Initially we were very influenced by our local heroes, Moneen. The Used and Boxcar Racer/Blink 182 were also up there on our direction list, but every time we hit the clean channel, it was for Moneen. We were about growing pains and dreams to leave our home town (very original…) As everyone sort of fizzled out into real life and new bands, I migrated the message of Rosedale to more of a motivational message to stay focused on your dreams, show the world what you’re made of, be grateful for what you have, and never give up.

Do the same things still drive the project when it was fresh-faced or have they evolved over time?

They’ve definitely evolved over time, especially with new members coming in for tours. I try to take titbits of their influences into the parts/intros/endings so they have a little more fun every night and it keeps things fresh for me. And I definitely still enjoy playing old songs and putting a twist on them. Right now we’re doing an 8 minute “anniversary version” of our 2006 single you’ll count to Ten (for whatever ten people care) which I just now realized has some serious irony in the title.

Since your early days, how would you say your sound has evolved? Has it seen more of an organic movement of sound or more deliberate intent to try new things?

Rosedale’s sound has definitely matured into more of a listenable aggressive pop. We no longer put our amps on 11 and sing/yell from our throats the whole set. But there’s definitely a lot more raw passion and expression on stage and in the recordings so it’s overall much more authentic. There’s also a lot more orchestration and traditional symphony/big band instruments in the tracks now- big choir vocals too. That evolution just sort of came naturally through my classical upbringing and appreciation for classic movie score composers like John Williams and Hans Zimmer. I just figured ‘hey nobody has really mixed that with punk rock’ and it’s made some cool songs. It takes a lot of time to score them out and program them to sound realistic but it’s a really rewarding process to hear them back.

Are there any in particular inspirations which have added colour to not only on the band’s music but your personal approach and ideas to creating and playing music?

There are definitely influences all over the place in my music and approach on life (Some more surprising than others). You might not think Lil’ Wayne has a strong influence on the decisions I make, but he does. I don’t smoke or drink syrup, but I often think “what would Weezy do?” whenever I feel like closing up shop early after a long day in the studio. I watched a documentary on how Michael Jordan switched from basketball to baseball and I was just as inspired to work on my show from it as I was from seeing an Angels & Airwaves concert. So influences are drawn from everywhere for me. If it sounds good to me, I’ll roll with it, if it has meaning to my life, I’ll write about it.

Is there a general process to your songwriting?

My process is No Process. I like to change it up every time I write a song and challenge myself. If I started writing on piano last song, the next one I might write on guitar, or uke, or acoustic, or just a pad. If I was using pro-tools to demo it out, I’ll try Logic or ableton or Reason for the next demo. If I just finished a sad song, next one is gunna be happy; slow song, fast song etc. The last thing I would ever want Rosedale to be is a recipe that has every song on the album sounding the same…as much as that works for bands these days.

I just write. Personal life memories, something that is on my mind a lot, whatever the chords/song reminds me of. I try not to decide what I’m gunna write about before writing a song. I usually just dive into it, even if there’s no music yet, and realize what I’m writing about once there are a few lines down.

Rosedale was released February 2016 and is a self-titled release because it’s basically all about Rosedale; where it all started, my personal story, why I am who I am, and the struggles I currently face. I recorded it at the studio that mentored me into the recording world, Drive Studios in Woodbridge Ontario. I’ve been good friends with Steve Rizun for the past few years and knew that studio inside-out so it made perfect sense to do the album there. It’s every control freak’s dream to have the key to the studio and I was like a kid in a candy store. 14 hour days flew by in that place.

Give us some insight to the themes and premise behind its songs. 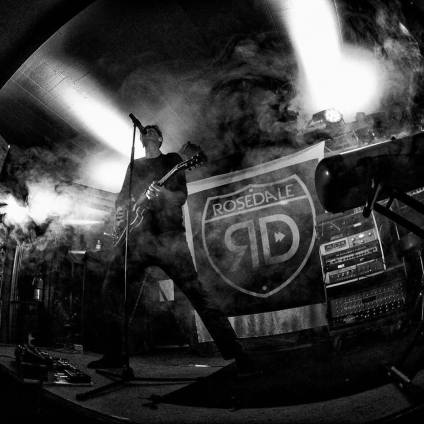 The on-going theme, naturally, is to do what you love and never give up. Sacrifice everything else for the one thing you truly wanna do with your life.

Do you go into the studio with songs pretty much in their final state or prefer to develop them as you record?

A little bit of both. I do like going into a studio with all the ideas mapped out and just replacing the tracks with better tones/takes. But sometimes I’ll just have a couple tracks and a tempo laid out and say “I’m saving this one for the studio…I wanna get crazy with this one”.

Tell us about the live side to the band.

We have a programmed light show and a bunch of automation on our mics to make it sound like (and sometimes bigger than) the record. We also bring our own fog machine. It helps make every show epic and works well with our music. Whenever I think “man, I set all this stuff up for nothing” I’ll see someone taking a picture or video and lose all regret.

It is not easy for any new band to make an impact regionally let alone nationally and further afield. How have you found it your neck of the woods? Are there the opportunities to make a mark if the drive is there?

Toronto is very tough to have as your home base. I rarely play it because it’s always such a let-down seeing everyone bail last minute. [With] most Canada shows that seems to be the case for some reason; like you have to create a big buzz elsewhere before your hometown cares about you again. I wish all it took was good music. The best place for music is Germany/Austria. Anywhere where German is the main language, good music prospers. I hear the same thing about Japan too but I’ve never been there myself.

How has the internet and social media impacted on the band to date? Do you see it as something destined to become a negative from a positive as the band grows and hopefully gets increasing success or is it more that bands struggling with it are lacking the knowledge and desire to keep it working to their advantage?

The internet and social media should be much more useful than it actually is. Contemporary social media has ruined music, straight up. It’s the independent musician’s worst enemy. It was great in the MySpace days but now, thanks to the corporate sharks taking over, it’s just one big useless distraction polluting everyone’s common sense. Will it ever be useful/free again? One can only hope. Don’t get me wrong, there’s a lot of positive things that social media is to thank for, like connecting with new fans personally has never been easier! But overall it’s just become one big cess pool of gimmicks, memes, vented personal matters, and ads.

Keep your stick on the ice.