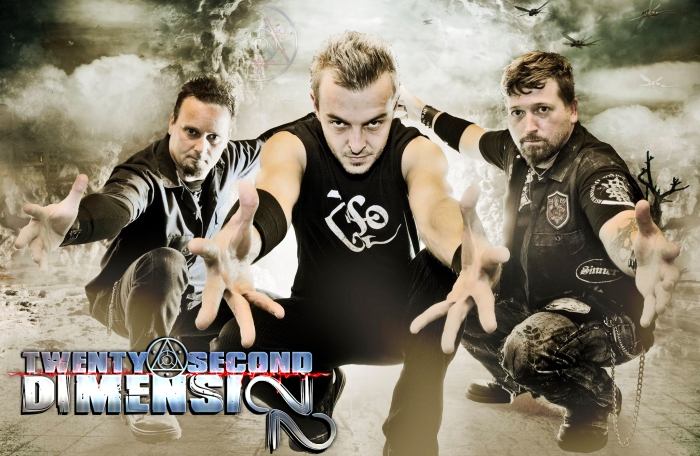 Twenty Second Dimension is a trio from Columbus, Ohio who have just released their self-titled debut EP, a release quickly grabbing attention. It offers five magnetic portions of the band’s melodic rock, a quintet of songs which bring a swift involvement of ears and feet. Theirs is a sound which nestles easily within a style many others are making successful use of too and in that respect it is not the most unique proposal you may come across with few big surprises involved yet there is no questioning the accomplished body and character of the tracks or the enjoyment each provides.

The band is made up of Eliot Hosenfeld (vocals and bass), Matthew Bowden (guitar and vocals, and Jeremiah Ross (drums), a threesome with CVs which include the sharing of stages with the likes of Limp Bizkit, Rob Zombie, Papa Roach, Sevendust, Theory of a Deadman, Incubus, Shinedown, Marilyn Manson, Five Finger Death Punch, Halestorm, Volbeat and many more before Twenty Second Dimension. It is a background easy to suggest has helped hone the skills and invention of individual members and the band as a whole; the growing of a craft which certainly makes their first release something to find strong rewards in.

Released through Pavement Entertainment, the EP opens up with Afterlife. Making a low key entrance it soon hits a catchy stroll with simmering keys surrounding a great blend of vocals and am equally inviting and throaty bassline. Guitars add their own specific tempting to the swiftly infectious encounter too, especially as the tenacious chorus erupts, though it is the blend of Hosenfeld and Bowden’s vocal harmonies which grab biggest attention. Continuing to unveil inventive twists and turns through the stylish hooks and riffs of guitar, the track provides a potent start, one soon backed with similar potency by the feisty croon of Without You. Whereas there was a more unpredictable edge to its predecessor, the second track shares a more rounded melodic rock persuasion with again vocals and harmonies commanding as melodies take their share of the imagination involved.

An infectious character and tenacity fuels Dreamless next, the track a vibrantly strolling slice of rock ‘n’ roll springing catchy hooks and riffs like confetti around the throbbing bassline cast by Hosenfeld and the magnetically jabbing beats of Ross. As suggested earlier, big surprises are rare but with the track easily whipping up physical and vocal involvement, there is little more to want from the excellent encounter.

Blindside steps up next, its initial guitar enterprise carrying a slight blues tone and subsequent melodies a classic rock feel before the track slips into a prowling gait with dark intimidating shadows. That in turn is followed by a flaming roar of evocative melody and harmony before the sequence is repeated to increasing effect.  That earlier unpredictability is in full swing here too, the song subsequently taking best track honours before Good Enough fires up its imagination to bring the EP to an impressive close. It too takes unexpected turns with a seamless flow, feistily seducing ears and great satisfaction with each breath and lure of invention.

The Twenty Second Dimension EP is out now via Pavement Entertainment.