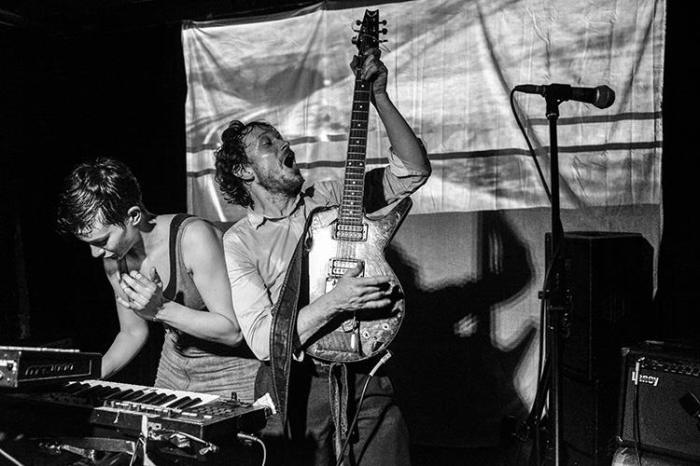 Bringing their most eclectic sound and irresistible hex yet to follow up an eagerly acclaimed debut album, British duo Vienna Ditto are about to unveil new EP, Ticks. It is seven tracks of fiercely diverse and mesmeric aural imagination; a collection of encounters embracing voodoo rhythms, electrified blues temptation, and beguiling vocal dexterity honed into a septet of unique psyche twisting proposals.

From being child student and guitar teacher in 2000, creatively reuniting a decade later, vocalist/synthist Hatty Taylor and guitarist Nigel Firth have become one of the most intriguing and imaginatively unpredictable encounters within the British underground rock scene. The Oxford hailing band through EPs and singles since their first, a self-titled EP in 2011, has explored, nurtured, and uniquely spun a sound which has always fascinated but become increasingly more fascinating and spellbinding release by release. That growth and exploration accumulated in the release of their feverishly praised debut album, Circles, last year. With the release of Ticks and some hindsight though, the impressive album now feels like it was the end of the band’s first chapter, a rounding up of early ideas and successes providing a springboard into even darker and boldly adventurous escapades to experiment with, such as those making up the sensational Ticks.

The EP opens with its title track, a slice of quirky pop with wonky melodies and smouldering rhythmic grooves around the immediately siren-esque tones of Taylor. Beats play as a settling lure until the song opens up with an even darker tang to its grooves and new wave like hues to its hooks and excitable energy. Slipping back into that initial seductive coaxing, things down settle again though a lingering volatility is there waiting to fuel another round of the addictive chorus and the subsequent sinister emotive waltz and mischievous musical tango which begin entangling each other. The track is glorious and, as the EP, simply more infectious and imposingly addictive with every listen.

Tiny Tambourines follows up the thrilling start with a gentler melodic kiss on ears, though tantalising electronic incitement and an off-kilter rhythmic shuffle are also there courting the warmer hues of sound and Taylor’s ever evocative voice. The track is a fuzzy romancing of ears and imagination, again with a great tempestuousness which means unpredictability lurks at every twist and turn before the brilliant warped bossanova of Frank Account takes over. From the first strains of guitar, ears sense a festival is waiting to pounce, a few seconds more brings confirmation as strolling beats and swinging harmonies surround Taylor and the flirtatiously jazzy grooves and devilish hooks of Firth. Like a slightly deranged hybrid of The BeauBowBelles and Molotov Jukebox, the song bewitches and enslaves; taking body and imagination on a lively and provocative adventure.

The mesmeric blues croon of Motherless Child comes next, the song a melancholic serenade lined with sultry yet unsettling shadows within a brewing portrait of loneliness and loss cast by voice and melodic discordance. It is spellbinding stuff, becoming more potent with every listen; a quality admittedly every song holds including the haunting cinematic drama of My Way of Missing You. Maybe best described as Portishead meets Morcheeba whilst lost in a dark world shaped by Lydia Lunch or The Sugarcubes, or not, the song has thoughts drifting off into shadowy exploits as ears fall for its invasive and hypnotic beauty.

The band’s sound switches to a spirit sparking gospel character for next up Go Down Moses, an incitement with loco guitar revelry and twisted gothic blues ingenuity to create a sure fire passion igniting protagonist. Its dark rock ‘n’ roll joins the long list of momentously rousing songs and moments within Ticks quickly joined by closing track Come Back and its busy and sinuous landscape of textures and craft within a cosmopolitan theatre of sound. Alone leaving ears and appetite greedy for more, the song brings Ticks to a sensational end while revealing yet another aspect to the creative sorcery breeding the release.

Vienna Ditto is a band which keeps on impressing and providing adventures which continually surprise and excite as they themselves become bolder and more dramatically imaginative.

The Ticks EP is released 13th May 2016 via Ubiquity Project Recordings @ https://viennaditto.bandcamp.com/