Bedlam suggests an element of chaos to its madness, an uncontrolled essence which certainly does not fit the character of Misanthropical, the new album from Finnish alternative metallers Peekaboo Primate. Yet in every other way the word best describes the creative diversity and inventive loco of the band’s irresistible incitement. The release holds ten tracks which twist and turn like a kinetically sonic kaleidoscope weaving an eclectic array of flavours into their own distinct imagination fuelled escapades.

Peekaboo Primate is like the joker in the pack of modern metal; not the fool playing with a lunatic demeanour just for attention, though mischief is never far from their imagination and songs, but the bold protagonist using unpredictable exploits to ignite the senses and inspire thoughts towards, in the case of Misanthropical, a world where “as ugly, brutal and harsh but sometimes also beautiful as it is – everybody wants to be part of the greatest party of our time before our species go extinct solely by our own hand.”

Hailing from Tampere, and originally under the name of Airhead, Peekaboo Primate was formed in 2004 by vocalist Lauri Lepokorpi and drummer Riku Airisto. The original line-up also included Hannu Kumpula and Tuomas Kumpula up to the release of the band debut album Peek-a-boo Primates in 2011. Following its release, the band changed its name to Peekaboo Primate with its personnel subsequently completed by the addition of guitarist Matti Auerkallio and bassist Juhani Rytkönen.

The time between albums has seen the band’s sound evolve and become even more defined in its real uniqueness, though if looking for a hint to what band and Misanthropical offer, imagine a mix of Dog Fashion Disco, American Head Charge, and Five Star Prison Cell with a touch of 6:33 to it. From its first heartbeat the album has ears and attention gripped; Spray Tan opening things up with an assault of tenaciously unpredictable rhythms and hungry riffs as wiry grooves wind around their thick bait. The vocals of Lepokorpi are just as dynamic and impressive, carrying an air of Chad Gray to their rousing presence at times as keys and guitars create a masterfully tempestuous and exotically dramatic theatre of sound 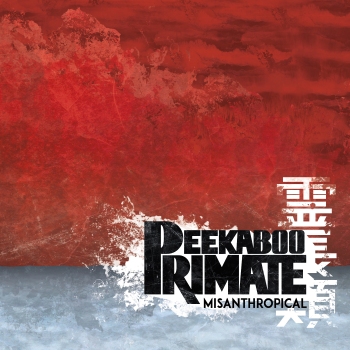 It is a thumping start matched in quality and irresistibility by the psychotically cultured Ha Ha. Sonic and rhythmic stabs court vocal shenanigans from the start with heftier beats soon adding their instable intent to the quickly compelling mix. Slithers of jazz and groove metal flirt with avant-garde psychosis as the track grows and writhes as well as anthemically incites in equal measure before allowing Nothing the opportunity to prey on an already submissive appetite and imagination for the release. The song saunters along with flirtatious and intimidating hues to the fore, Lepokorpi like the ringleader in its midst as his narrative challenges and highlights the issues theming the magnetic proposal.

From its initial intriguing low key start, The Unleashed soon unveils a pulsating and sinister body of synth bred sound as exotic and sultry hues in female voice and melodic suggestiveness add an alluring invitation. The challenging words of Lepokorpi probe and echo in the background before with unpredictability as enjoyable and prominent as ever, the track slips into a reggae cultured shade of character, though it is just one moment in the revolving journey of the encounter.

An addictive dose of pop ‘n’ roll grips next in the outstanding shape of Heroine, its catchy colour led by the great guest vocals of Noora Louhimo from Battle Beast. The rest of the song is a predacious prowl with the again effect coated tones of Lepokorpi stirring up riffs and rhythms between the flames of pop temptation. Within moments, it is sure to have bodies bouncing and voices fully involved, as ours, before Mama Earth rumbles as sonic spices zoom in and out across its growling tone and nature; that American Head Charge reference coming to the fore here, across a wonderfully grouchy yet fiercely inviting proposition.

As its predecessor, Star has a more ‘straight forward’ adventure to its body, though as the last treat too, there are plenty of unexpected and seamlessly woven together twists to catch out expectations and enthral the imagination, especially when uncaging some creative aberration midway. It’s more composed sanity and boldness is contrasted by the delicious raw frenzy of Peekaboo Primate, the track a demented slice of noise rock infested avant-garde/nu metal mania and quite irresistible as it stalks and bruises the senses.

Some of its punkiness survives in the cantankerous luring of ears by Follow My Lead, though the song is unafraid to bring some pop seeded melody and contagion into its imposing metal shuffle between even more irritable and aggressive trespasses.

Ending with the melodic caress of 291112, an emotively suggestive instrumental which fits easier into the scheme of the album with each full listen, Misanthropical is ripe pickings for the imagination and enjoyment. It offers a canvas and adventure which persistently provides fresh twists and surprises even after numerous listens. We will admit, we had not heard of Peekaboo Primate previously, a band which right now it is hard with their music to get out of our heads.

Misanthropical is released on CD and digitally May 12th via Inverse Records.