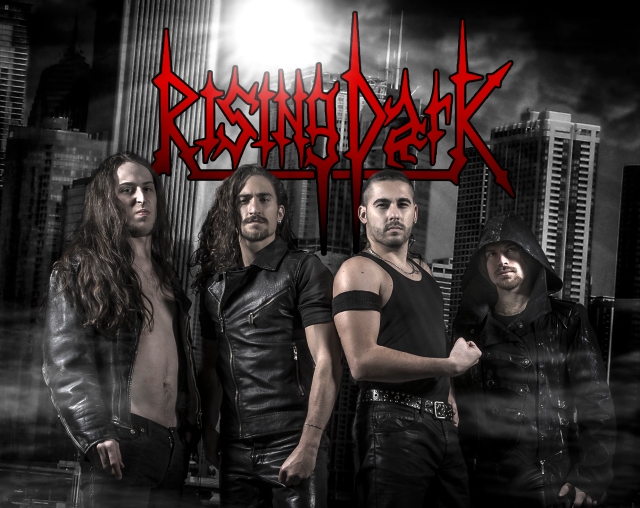 Formed in 2005, Italian metallers Rising Dark have just began their second decade as one of the underground’s striking and rousing thrash metal propositions. Earlier this year they released second album A World In Ruin via White Tower Records; a thumping and resourceful encounter from the quartet of vocalist/guitarist Michael Crimson, lead guitarist Stanley Bleese, vocalist/bassist Dan Ross, and drummer Balzael, as surprising as it was inescapably anthemic. With thanks to Balzael we now have the chance to explore the heart and depths of Rising Dark…

Hi from Balzael and Rising Dark, thank you for the opportunity.

Can you first introduce yourselves and give us some background to how it all started and what brought you together?

It all started in 2005 from an idea of me (Balzael) and Michael Crimson; we just wanted to have some fun dreaming about being rock stars and stuff like that. We started with some covers and things like that. The funny thing is that I was not able to play any instrument and I chose drum just because I was inspired by some famous drummer of that time. In a couple of years we tried to produce our own music and here we are with more than 10 years of career and two albums around the world.

So Rising Dark is your first musical venture?

When we started, Rising Dark was the first band for every one of us but during this year we had a lot of side projects. I have always some active side projects to play with, now I’m touring with Angerdome. From a musical point of view I would not say that our side projects affect our genre but it definitely affects the way we play and grow in music ambient. For example with Angerdome, due to the nature of the genre, I’m forced to play a “static drumming” that follows everything the guitarist plays; for sure in rising dark we do not have that strict need but this is for sure something to learn from.

We were 15 at the time, we just picked up a “dark” name; today we still love our name so we were not so foolish at the time ahah.

We did not plan anything in our career but for sure we wanted to propose something rude but also catchy; for sure Metallica inspired us a lot in creating our own music too but we definitely never took by choice anything defined or played from other bands.

Does the same initial spark still drive the band from when it was fresh-faced or has that first wind of creativity evolved over time?

Well, we are still rude and catchy and we still compose thrash metal with no bounds and limits, we take elements from Death, Thrash and Prog music. I would even say that we take something from rock because we often compose ballads that are quite strange for a thrash metal band.

Our sound is still rude and catchy but I would say that our approach at composition has changed since we learned to be at the service of music and not the opposite. During the composition of our first release, Apocalyptic, we composed with no bounds and regardless of the “final listener’s effect”. That worked but to create tracks with an average duration of 7 minutes is not always a pro. Today we are learning the best way to communicate to people with our music which means you cannot simply walk into the jam room and start to play everything you want when you want and how you want; you have always to keep in mind that you are a performer and an artist and that your final goal is to reach people hearts and let people have fun. You are not producing music only for yourself.

Has it been an organic movement in your sound or do you deliberately try new things?

Everything came naturally and not planned in any way, we just communicate with our music and our fans; our natural enhancement process is to go where our music takes us. When you see that your fans appreciate what you do and understand it, well, you are on the right way.

Presumably across the band there is a wide range of inspirations; are there any in particular which have impacted not only on the band’s music but your own personal approach and ideas?

Well, regarding other bands, we definitely are inspired by Metallica, Slayer, Testament, and the great “fathers of metal music” like Ozzy or Judas Priest but we don’t want to emulate anyone. In fact, what we propose is really a personal interpretation of our genre (that is my opinion). For sure we are also inspired by society, religion, books and films regarding our themes.

Is there a particular process to the songwriting in the band?

Yeah, Michael Crimson usually starts with an idea more or less complete; we jam on it and try to define the shape of the new track while trying some lyric approach. Once done, we focus on lyrics and solos. I finally take care of the arrangements and all the production process.

You have already touched on it but where, more often than not, do inspirations to the lyrical side come from?

It has been a difficult and long process because while we were composing the tracks we also were searching for a new bass player. Fortunately we found Dan Ross only a month before the recording started who gave his final touch to our tracks. For this album I wanted to obtain a more “live sound”; I’m so sick of listening to perfect albums that are completely different from what a band can propose in a live situation. I don’t want to go back to recordings of ’60 or ’70 but I think that an album is more personal if you do not use too much triggers or fantastic presets. If the music is great you do not need a massive production. Nowadays even a band that started jamming yesterday can have an album that sounds like Meshuggah (obviously I am exasperating the concept) but it’s not so easy to find a personal album. That is our direction.

Please give us some insight to the themes and premise behind your release? 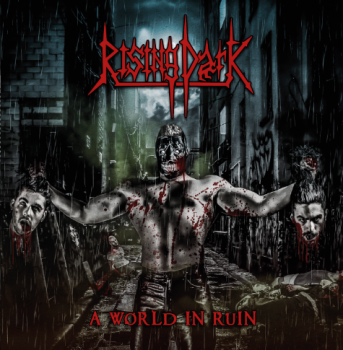 Well you can find post-apocalypse worlds, fantastic tales of creatures from Lovecraft’s mind as you can find our personal view of criminality, or war in its emotional aspect or in it’ violent habits.

You enter the studio with songs pretty much in their final state?

When we enter the studio our tracks are totally completed; just in order to give you an example, drum’s recording took 5 hours which means that you play “one-shot” at the tracks.

We definitely believe in SHOW. For us it means not only that you must play in a professional way but that you have to bring a real metal show made of blood, masks and stuff like that. We want to communicate with people in any possible way just in order to see them have fun. We don’t give a fuck about being famous or stuff like that, we want to see people have fun with our music; if that causes us to sell our products well it’s obviously good for us but our goal is to give people a moment to remember, and this vision applies also to the band member. We don’t want to grow old and have nothing to tell to our sons…… yeah… we usually exaggerate a little bit in our shows haha.

It is not easy for any new band to make an impact regionally let alone nationally and further afield. How have you found it where you come from? Are there the opportunities to make a mark if a band wants it?

Yeah, SACRIFICE and PROFESSIONALITY, these are the keywords. You must always work hard. I also see a lot of bands totally concentrated in what they are playing, watching strings during live [performances] or looking at the stage floor; if you want to reach people you have to communicate with them. If you are doing this for the money well you’d better pack your shit and go gardening, if you are doing it because you want to hear “Oh thank you so much Rising Dark for that show and for your music” well achieve that by playing with people and not only with your instruments.

How has the internet and social media impacted on the band to date? Do you see it as something destined to become a negative from a positive or only a good thing if worked properly?

Well social networks nowadays are a great way to promote you music, but if you are only a social network hero and at the first gig you are a piece of wood, I grant you that you will remain a social network hero. Social network can increase you success but it will work only if there is some “substance”. Social networks also increased the concurrence between the bands because everyone can reach anyone in any moment so if you want them to have you next, you have to offer something real and personal so people can remember you.

Yeah Dan Ross put mayonnaise on the fucking pizza. No, seriously, thank everyone for reading this. You can find our single Plague on YouTube, take a look at it and give a chance to our album if you like thrash metal; support underground artists and STAY FUCKING METAL.