Unheard Before The Wake – Humanity Burning

It is fair to say that Humanity Burning took its time to fully convince, for its ideas and elements to fall into place within ears and understanding, but when it did, the new EP from UK melodic death metallers Unheard Before The Wake showed why the band is beginning to be strongly noticed within the British metal underground. Unleashing five intrusive tracks which devour the senses while intriguing the imagination, the band’s sophomore EP emerges as an attention grabbing trespass.

Formed at the end of 2013, the Sutton hailing Unheard Before The Wake has increasingly lured fans and keen interest through the release of their self-titled debut EP on 2014 and more so a live presence which has seen the quintet share stages with the likes of Xerath, Meat Train, and A Vulgar Picture. Their sound is a tempest of extreme flavours unafraid to entangle black and classic hues into its death and melodic metal bred invention. Humanity Burning is the band’s new national assault on ears, a release which maybe does not always fit perfectly with personal tastes but certainly left them with an appetite for more.

The EP opens with its title track and a nagging of riffs, their whiney hue like raw nectar swiftly grabbing keen attention further enhanced by the barbarous torrent of beats and the great gnarly tone of the bass. As its predatory nature continues to ignite the appetite, the track rumbles and grumbles like an awakened beast, subsequently stretching into its prowling gait and animosity as the heavy throaty growls of vocalist Chris Rossiter enter the scene. At this point the guitars of Dylan-Thomas Chinchen and Ryan Adams expand their own tapestry of enterprise and sonic flavouring, the song blossoming into an unpredictable and increasingly rousing proposition. On the initial listen, it almost seems to have too much going on in its rabid assault but with time each twist and turn skilfully flows and in turn impresses. The personal taste thing does kick in as cleaner vocals make their appearance, an addition which just does not work for these ears, though the only time something grates against rather than benefits the song. 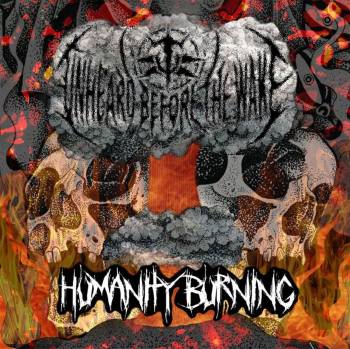 Lurker steps up next, again with an opening which demands attention. This time the invitation is a threatening collusion of sound and texture, almost asylum like in its tone and vocal cries. Framing the drama, drummer Jasper Brownlow and bassist Adam McGuinness again place wonderfully grouchy bait which only finds greater impact as a thrash bred surge of riffs and energy erupts. As its predecessor, the song also flows through intensive and slower predacious moments to keep expectations on their toes, especially the almost theatrical passage of the lyrical protagonist’s introspection which comes forward.

It is clear Unheard Before The Wake know how to compose a song to make an immediate impact, The Pluto God also stirring up ears in seconds with its fierce waltz of grooves within an intimidating rhythmic shuffle. In no time from that great start, the song is stalking the senses and psyche with the excellent heavy throated growling of Rossiter a potent lure in the corrosive storm. The twist of classic metal seeded vocals derail the track a touch again for these ears though it is soon back to its former glory with raw guttural vocals leading to a weave of tantalising craft and flavours.

The EP’s best track, Right To Die, comes next; it a maelstrom of intrusive rhythms and riffs bound in roaming grooves and melodic toxicity which swiftly inflames air and ears. Clean vocals do make another appearance but in spoken form to great effect, providing another texture in the resourceful blaze of sound and imagination.

Completed by an instrumental reprise of its title track, Humanity Burning is a release which takes its time but makes a thoroughly enjoyable persuasion of the potential and readymade qualities of Unheard Before The Wake. Their sound still feels like it is in evolution which only adds to their promise. The press release suggests Humanity Burning is something fans of The Black Dahlia Murder, Carcass, Dimmu Borgir, and Cannibal Corpse might take a shine to; something easy to agree with. As for the clean vocals, we suggest the band really does not need them with everything else boiling up rather nicely.

The Humanity Burning EP is released April 29th @ https://unheardbeforethewake.bandcamp.com/ and most online stores.