A band sows its seeds with their introduction and debut songs from whence you hope to see their qualities grow into bigger and bolder blossoms. That is exactly what has happened with British rock ‘n’ roll bruisers Hung Like Jack. Last year the Darlington quartet tempted attention with the AA-sided single Fire beneath me/ Life’s first sign of rage, a pair of songs which, though actually not their first offerings by a long way, grabbed a fresh horde of eager ears with a new spark in their sound and invention. The two tracks were raw and intrusively confrontational slices of punk ‘n’ roll carrying the suggestion of bolder things to come. That promise has now blossomed and more in new single She’s Not Dead, a seriously rousing and stirring slab of incitement hard to tear ears away from. 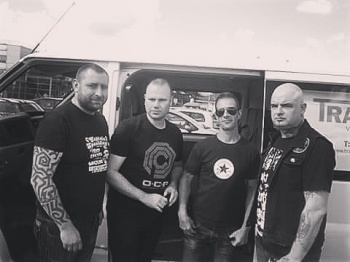 Last year’s offering seem to mark a turning point in the adventure and stature of the band who had already uncaged a trio of EPs and in 2014 the seven-track White Powder mini-album. Formed in 2007, Hung Like Jack quickly put their mark on the local live scene under the drive of John, Tim, and Hakim. Their current line-up was completed by the recruitment of drummer Denz, a union in place before the release of last year’s potent pair of tracks.

As suggested, as good and highly enjoyable as that last single was, She’s Not Dead is in another league and quickly gets a grip on ears and appetite with its opening shuffle of beats and the great lure of the growling bass. That early tempting only increases as raw swipes of riffs show their face within a few more seconds; it all colluding and creating a boisterous almost cantankerous stroll of sound as Johns vocals add further infectious confrontation. Without a lull, riffs and that glorious bass hook continue to entice and enslave as lead and backing vocals emphasise the anthemic pull of a track still taking bites at the senses with Denz’s uncompromising swings.

A great old school punk/new waver essence escapes moments of relative calm which inventively show themselves whilst fiery grooves reveal the heavy rock ‘n’ roll aspect of the band’s sound and invention; hues joined by a definite early Therapy? like roar. It is striking and invigorating stuff from a band which, even if using just one song as evidence, seems to have creatively come of age. The hints were there last year and now makes a hearty roar within She’s Not Dead, the kind of song that incites mass celebration.

She’s Not Dead is out now. Check it out @ https://soundcloud.com/hung-like-jack