Boudain – Way of the Hoof 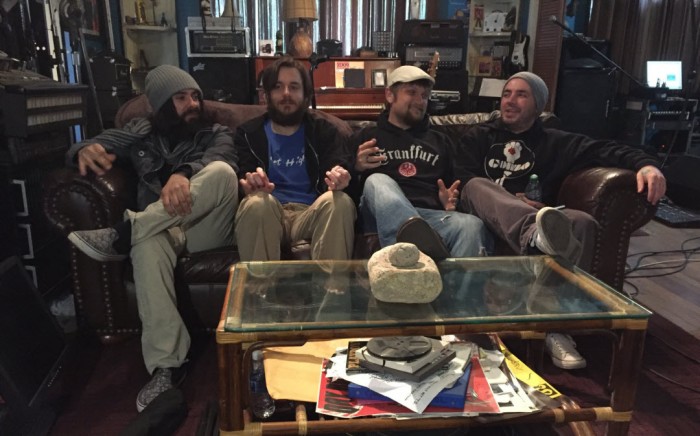 For those with a lust for the groove and the fattiest slabs of heavy rock ‘n’ roll flavoured meat, the checking out of US stoners Boudain might just be the best order of the day. The quartet has just unleashed debut album Way of the Hoof,  a ravenous swamp of stoner and sludge infested waters  which preys on the psyche whilst feeding the appetite for dirty and fiery rock ‘n’ roll. Influences to the band include the likes of Sleep, Melvins, Kyuss, and Fu Manchu which their album does not shy away from bringing to the party in flavour across its eight thumping trespasses, especially the last of the four. To that though, Boudain add their own meaty sauce for something which mighty not be breaking the banks of originality but certainly feeds the soul and appetite for imposing metal and invasive rock.

Consisting of bassist/vocalist Chris Porter, guitarists Brian Lenard and David Karakash, and drummer Stephen Jester, Boudain released their first EP in 2013. The self-titled six-track offering caught the ears and attention of a great many which Way of the Hoof is now poised to escalate, to easily assumed, broader heights. Opener Sleazy Feats swiftly has ears wrapped in almost salacious grooves as rhythms badger and bear down on the senses with a hefty hand. Riffs and vocal swipes only add to the highly agreeable introduction, a potency which continues as the song swings with zeal and enterprise across its fiery body. Surprises are not an open proposal though a freshness to the familiar landscape is, and increasingly so as Lenard and Karakash incite their grooves and toxic melodies to breed an even stronger strain of temptation.

Some might suggest that the album is a touch muddy but as the opener and following Neptune alone show, it is a thick smothering which adds to the swampy, at times almost delta blues like, intensity and richness of songs and release. The second track brings a bit of punk to its contagious confrontation too, clashing percussion uniting with the predation of the rhythms as the song simultaneously swings and prowls. Quickly it eclipses the impressive strength of its predecessor, continuing to impress and inflame ears with its thickening web of grooves and sonic acidity before allowing CODA to share its own imposing wares. Whereas the first pair flew at the jugular and senses, this track prowls, almost stalks the listener as its tar thick sludge breeding consumes ears. Porter’s vocals, or Lenard’s as the two apparently share duties across the release, again provide a great mix of growl and dirt encrusted infectiousness as they match the textures of the sound around them.

A cosmic ambience lines the sweltering lure of guitar as 3 Man steps up next; that sultry invitation and suggestiveness lying upon a great rhythmic rumble led by the swinging throaty infectiousness of the bass. The song soon slips into a more expected stoner blaze though drums and bass continue to cast their rhythmic hex on ears and appetite as the guitars weave an intoxicating tapestry; a knit which continues right to the end even as the song becomes more aggressively volatile.

First Class rips into ears next, it taking the listener back to the more hellacious type of assault the album opened with as tangy grooves and scything beats take their share of attention along with the brooding bass and attitude soaked vocals. Once more, a recognisable air to the track is rife but only within that welcoming Boudain character that ensures nothing is as simple as being a copy of those earlier mentioned influences or others.

Through The Mighty Turn Around and its sonically spatial exploration, and the rawer bruising stroll of Disco Jimmy, ears and album continue to be bound together. The first of the two has some of the most mouth-watering bait in its grooves and psyche infesting rock ‘n’ roll whilst its successor is a psych rock igniting of the imagination which lights the flames of thorough enjoyment if not the major excitement some of its earlier companions provoked. Nevertheless both leave ears more than content with the closing cover of Blue Oyster Cult’s Godzilla adding its enjoyable feed; the band treating the track to its prowling strain of sludge and stoner predation.

It is a fine end to an album which might have provided its major moments in its first half but from start to finish only inspires a real want for more and the idea that Boudain have the potential to sculpt major temptations luring equal attention ahead. They have plenty to get a little lustful over right now too which Way Of The Hoof offers with relish.

Way Of The Hoof is out now @ http://boudain.bandcamp.com/