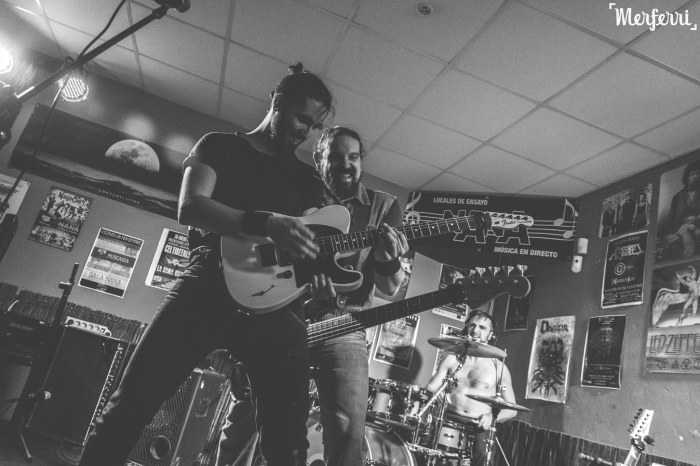 One complete movement or song split into ten standalone chapters, Winterize is one riveting adventure for ears and imagination. The new encounter from Spanish instrumentalists Ciconia, the concept album is a bold and fascinating merger of progressive rock and metal with post rock attributes aligned to a whole array of other flavours and styles from stoner to folkish enterprise. Winterize is quite superb, a mesmeric and invigorating incitement leaving pleasure and spirit eagerly aroused.

Hailing from Valladolid and drawing on inspirations from the likes of Opeth, Anathema, Distance Calling, Toundra, Mogwai, Liquid Tension Experiment, and Porcupine Tree, the 2013 formed Ciconia soon grabbed attention with debut album The Moon Sessions the following year. Its impressive body drew the band to the attention of the Independent Music Awards in Spain last year, that recognition backed by The “Z” Sessions EP, which featured a trio of tracks from the album re-mastered and remixed by Roy Z and was unveiled as the band hungrily took their live presence around Europe; the likes of France, Italy, Germany, Holland, Belgium, Slovakia, Romania, and Hungary taken in as well as extensive shows across the band’s homeland.

Now it is Winterize set to awaken new spotlights; an aim easy to see succeeding such the beauty and impressive melodic character of the album alone. The trio of bassist Jorge Fraguas, guitarist Javier Altonaga, and drummer Aleix Zoreda open the album and creative narrative up with Snowfields. From wintery winds and a solitude suggesting ambience, a single melody flickers into life and begins seducing ears and imagination. Like a flame in the cold air, it dances on the senses, painting provocative imagery in thoughts before the band cast an alluring mix of classical and Spanish like guitar. With the theme of the release from artwork to aural suggestion, expectations were that the album would provide cold and imposing soundscapes to ponder. The pure warmth and elegance revealed by track and album throughout was not predicted but swiftly devoured as it added to the inventive palette presenting the imagination with plenty to work with.

The gentle flight of the first track is replaced with the busy and bullish tenacity and energy of Eloina´s Inn. Strands of varied metal and heavy rock enterprise entangle as they descend feverishly on the senses, the track like a celebration and boisterous oasis out of the starker air of surrounding creative scenery. Rhythms are virulently dynamic and guitars a blaze of flirtatious and descriptive adventure whilst the skills of the individual members are as open and gripping as their combined endeavour.

There is no way words can present all that is going on in songs and album or of the diverse flavours lured into each dramatic piece of composing and invention but as the volatile soar of Limbus and the snarling confrontation of Scarsman proves, Ciconia create music which does not need to offer or receive any hints or clues to help the listener invest in their own adventures.  The first of the two takes thoughts through spatial hues whereas its successor creates a flesh marked protagonist in another mentally sculpted exploit which you would might be wary of yet reassured of their involvement.

As each track passes it offers a theatre of sound and rousing ingenuity; the epic serenade of The Forgotten casting a melancholic embrace and tempestuous fire of attitude and emotional turmoil all in one whilst A wolf never comes alone is as predatory as it is anthemically irresistible. A tempest of ear lashing beats and carnivorous riffs at its core, the piece is also a maze of classic rock acidity amidst antagonistic turbulence and quite thrilling. Its darker moonlit secrets and dangers midway only add to the bewitching drama of a song which leaves ears and emotions alive and ready to be ignited further by the outstanding Reel of Trevinca. Spanish folk rock meets Celtic spicery, the song has a great essence of Horslips about it at times as it whips up a jig and romp to get physically involved in.

The very brief melodic stroll of Forestwalk beside the crystal beauty of running water leads thoughts into the classical, almost vaudevillian exploits of Fiadeiro. Extreme metal textures collude with the radiance of classically spun melodies, further growling textures emerging with each twist of the song’s adventure and the sonic enterprise which colours the scene painting imagination shaping it.

The album is completed by the sixteen minute plus Towards the Valley, an emprise of craft and unpredictable incitement that seamlessly and beautifully moves though peaceful scenery into shadow drenched and in turn danger spawning challenges. Continuing to revolve and evolve through various shades of each across its long but seemingly quick in the ear such the eventful nature of its passage, the track is a striking end to a sensational release.

With Winterize, Ciconia have pushed themselves to the fore of instrumental and progressive rock; more importantly though they have given ears and the imagination one truly exciting and irresistible collection of aural pigments to go conjure with and inevitable richly enjoy.