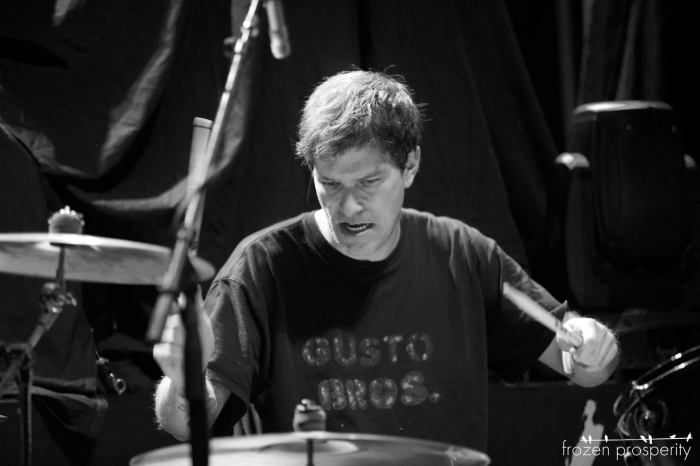 We have not been alone in declaring Tango Umbrella, the new album from American Head Charge, as not only one of the band’s most thrilling and potent offerings but one of metal’s most exhilarating incitements in recent times. Following the successful Shoot EP, the album confirmed after a hiatus that the band has returned creatively bigger and bolder than ever. With the offer to find out more laid before us, we quickly seized the opportunity to quiz drummer Chris Emery about not only Tango Umbrella but also on that six year absence, the kinship within the band, and much more…

Hello Chris and great thanks for sharing some of your time with us.

I think most metal fans know something about the beginning of American Head Charge and certainly your albums, The War Of Art and The Feeding. But the reasons for the hiatus we realised we were definitely in the dark. Before looking at the mighty treat that is Tango Umbrella, can you explain why the break and more so what sparked the band’s return?

Certainly Pete, I wouldn’t mind shining some light on that spot of AHC history for you. Basically the hiatus was Chad Hanks, co-founder and man with the plan, closing up the A.H.C. shop. Continually not being able to make contact with Cameron (Heacock) for song collaboration purposes and anything band related, he naturally called it quits. He tried to get in touch with him but they weren’t able to get together. As far as we knew at the time the break was permanent. Then one day, out of the clear blue, Cameron emails Chad new demos. No “hi, how you /this is what’s going on.” After Chad heard Cameron’s voice he knew that he was healthy and writing amazing work. I received the same demos. Some of them were songs that Justin and Chad were working on in addition to the brilliant work coming from Cameron. We were all just so happy to know that he was alright and in a happy creative frame of mind.

And the songs were exciting to boot so that was a plus and the spark that supplied all the energy this collaborative shared dream needed to gain lift and begin to take shape. The whole year leading up to Chad sending me songs and asking if I was down to play again; I was setting off sparks every day in my own mind. I would sit and daydream about playing with them again. Mentally preparing myself for the day that spark caught fire and set in motion the series of events leading us here. The spark was the music. As soon as I heard the demos for Let All The World Believe and Perfectionist, I just knew in my heart that these songs were a pre-production process away from being an incredible record. We knew it was going to take every ounce of energy and clout we could gather to make it happen. The fans were a huge spark. When we did the indigo campaign and it was a huge success it became real. We began pinching each other on a daily basis.

I often wonder when a band stops or goes on a hiatus and then returns sometimes years later, how much is feeling like there is unfinished business, how much is working through issues and then members coming to a mutual kinship again, and how much is simply as a music fan being inspired by other’s great releases to go again or to show some how it should be done…any apply to AHC?

All of it applies. There were loads of new songs to work on together as a band. There was much work to be done and everyone was eager to get started. The mutual kinship came naturally. You get us together, and no matter what we’ve endured in the past, we squash it and move forward. We grew while apart, and I witnessed grown men with love in their hearts say and do everything needed to honestly come together. As we got sincere, the music grew tight. You could see it in our eyes and in our actions and behavior. We were on a mission to make an honest comeback that contained all the essential ingredients; overcoming hurdles, timeless music, support from fans, excitement from a record label, and the entire group giving 100%. Even when we had to overcome obstacles, we supported each other and never lost sight of why we decided to do this in the first place. Nothing great comes easy.

As we mentioned, you have just released the excellent Tango Umbrella, an album which for us is as much a kaleidoscope of your creative highlights to date and indeed inspirations as it is a wholly fresh and stirring AHC proposal. Did you have any particular intention in the writing of the album and the character of its sound to re-connect with the past or was it something which organically emerged?

It emerged and evolved organically. A lot of our tried and true methods of writing become helpful when working with new songs. Remember, this is coming from a self-taught drummer that doesn’t write lyrics or music. When we got together and played what they originally wrote it evolved into the finished songs. Sometimes changing a little, other times remaining much closer to the original song idea. On this and past records I contributed a few ideas. Mostly from what I witness and hear when watching my brother’s work, some kind of magical muse takes over. We do our best to get our egos out of the way and let it guide us. Sometimes it’s as simple as doing the part that was written and let the original attraction of the music have its voice heard through the live recording process. I would complicate simple parts at times. It would take direction from everyone to keep me focused. And sometimes it flowed naturally with less effort. We just did our best to create the structure for the song that fit the music perfectly. Sometimes on the spot creativity and experimentation guided the production along. Those were exciting moments.

I can assume the songs within the album are all new propositions or were there older thoughts and previously unused ideas also brought back into the open?

There were a few songs in pre-production that didn’t make the record. Because there was such a large selection of songs and ideas, it was a mixed bag for a while. It had to be carefully sifted through to come up with the perfect selection of tunes, a process helped by having Dave Fortman use his production expertise to help guide us. Most of the songs were new. I did hear a few ideas that were reshaped into ground-breaking AHC effort.

How in general do you hear your sound’s evolution over especially your albums to this point?

I hear more dynamics in the music and lyrically. Cameron is stretching out, coming up with mind blowing ideas. Justin’s involvement in song writing and growth has been amazing. I’m just trying to keep up with all of it and get better as their songwriting evolves.

How did the band approach the creation of Tango Umbrella in the writing and its recording? Was it majorly different to how you went into making The Feeding for example?

I wouldn’t say majorly different in music writing and lyrics. Justin wrote lyrics. That was different. The fans paid for it. That was a major difference

and help. It was recorded in beautiful Richmond, Kentucky. The backdrop of lush green pasture with miles of fences was much softer than the LA concrete. Especially when walking the dog. When we did pre-production for The Feeding we were at Cole Rehearsal studios. LA had more distractions but the studio was bigger. I was fresh out of treatment during The Feeding; recorded it stone sober.

You have touched on this in regard to the new album but generally how do songs come together within the band? Is there a specific method or more regular way by which tracks come about?

Most of the time, Chad and Cameron write songs then bring them to us. The regular is we learn the tunes then we all pre-produce them. There are so many ways they can come together. Starting with riffs, lyrics, samples, loops triggered manually keeping time.

How long had Tango Umbrella been in the making?

From when we started recording it took longer than originally planned. But we had to pay as we went; the way I see it, since The Feeding was finished.

Were its seeds and direction already planted in thoughts in the early moments of the band’s return and the Shoot EP, which I would say in hindsight, gives a definite hint or two about what was to come ?

Yes that is a fairly accurate statement. Shoot was more of a snapshot of where we were musically at the time. It was tracked quickly while on tour. With Tango Umbrella we had more of an opportunity to let songs evolve more before recording.

As you touched on earlier, the band went down the crowd funding route for Tango Umbrella. Do you think this is the way for bands to go now; the future of being able to make music once a band hits a certain fan base level?

It worked well for us. You can do a lot with several thousand dollars. You can also do much these days with less. So depending on how much the band could raise. It does look like a great option for bands today.

Can you tell us about the themes running through Tango Umbrella and certain songs?

I could but right now Christopher is going to pass. It’s a great question.

How about the emotion loaded A King Among Men? We got the feeling it was inspired by the loss of AHC guitarist Bryan Ottoson in 2005 but also may be by more recent losses like Wayne Static and of course Lemmy. What are its origins?

Not sure exactly, but it makes me think of Bryan and my brother Tim. The song gives me cold chills.

Who came up with the excellent art work and photography for Tango Umbrella?

Once more many thanks for chatting with us. Anything you would like to add?

Check out our review of Tango Umbrella @ https://ringmasterreviewintroduces.wordpress.com/2016/03/24/american-head-charge-tango-umbrella/