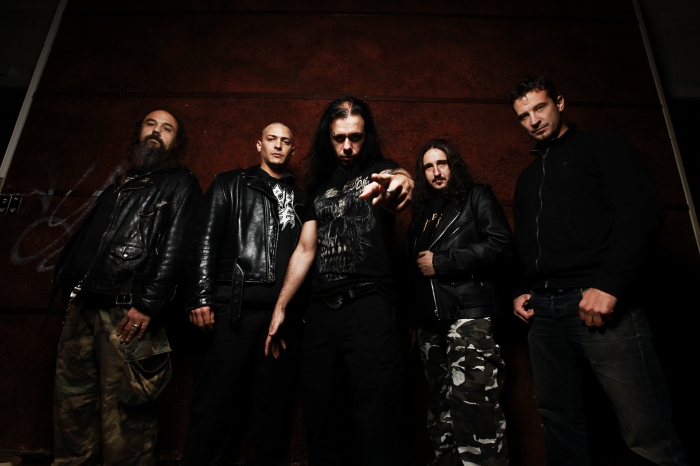 If you have a sweet tooth for raw thrash metal or a soft spot for ravenous death metal, Years of Legions has plenty to eagerly embrace. To be honest, the new album from French band Skox has much for fierce metal fans in general to get their teeth in to across ten tracks which maybe do not always majorly surprise but definitely get the juices flowing.

Formed in 2003 and with their current line-up in place since 2010, the Lyon hailing Skox has shared the stages with the likes of Napalm Death, Hatesphere, Loudblast, Destinity, Blockheads, Mumakill, and No Return over the years whilst also making successful appearances at festivals such as Sylak and Ragnard Rock. An early EP also caught attention but it is with Years of Legions that it is easy to expect real attention gathering. With a sound inspired by thrash and raw metal from across the decades and an album “whose martial tones would convey the band’s ambition through the metaphor of war”, Skox is ready and equipped to wage war on a broader landscape.

The album opens with Entering the Battlefield…, a prelude and lead into individual battles posing as songs. Air and land is swiftly busy with the weapons and intent of confrontation, rhythms raising the flag as melodies lay down the sizzling colour and suggestion of things to come as the instrumental heads straight into the jaws of the album’s title track. A stable yet imposing start to the second track is soon a hellacious onslaught of vicious rhythms and violent riffs matched in grizzly kind by the tones of vocalist Jean-Charles Dupin. It is stirring stuff, a visceral dark thrash incitement driven by the hefty swings of drummer Arnaud Neyret and the grouchy bassline of Florent Claudel. Within this, guitarists Vincent Morelle and Gildas Turpin unite to savage and seduce with sonic and melodic enterprise, the band creating warfare across a rousing challenge with plenty to be beguiled by.

Claudel’s bass has ears and appetite enslaved in no time on the following Cell Swelling too; its throaty snarl delicious bait which is quickly matched in steely kind by invasive riffs. Provoking and enticing with every touch, the song scowls and bruises throughout but tempers its merciless intent with great unpredictable side steps into calmer rapacious exploits often led by that irresistible bass tempting. As with its predecessor, the song is not re-inventing the wheel but a fresh and individual character to each is the predominate spice which equally stirs the spirit across the likes of Running Out of Time and Thrashtastik. Amongst influences listed are the likes of Slayer, Testament, and Kreator; flavours which especially come to mind in the forcibly contagious first of the pair with its compelling trespass of a swing. Its successor is relatively less open in influence as it uncages a bedlamic shuffle of thrash voracity and ridiculously catchy endeavour. It is a death dance, a flirtation to destruction and as the previous track, one thrilling provocation.

Engine of Death is a track which stalks the senses, prowling around them with toxicity slavering grooves and brutal rhythmic teeth as the increasingly enjoyable growls and animosity fuelled squalls of Dupin rage. By its close, ears and senses feel like road kill, trodden into its sonic rancor and acid laced melodic dust before Road 666 runs over both again with its own eventful juggernaut of lethal swipes and carnivorous riffs. As with others, Skox infuses the song with tendrils of fiery and evocative melodic invention which aligns with the antagonistic side perfectly; the extremes sharing song and attention like brothers in arms.

One bassline is all March of the Dead took to spark an insatiable hunger in the imagination and appetite, its opening trap the doorway into a bestial consumption of ears whilst Smash Your Enemy matches its predatory prowess with its own particular militarist quarrel. Throughout both Skox again turns familiar essences into their own enthralling and highly incendiary sonic warfare and once more leave a certain hunger for more.

Closing with the instrumentally descriptive ‘epilogue’ of Leaving the Killingfield, the riveting album is an increasingly impressing and rousing encounter revealing more temptation with every listen. Skox is a name hard to forget from a band with a sound which seemingly has the same property going by the effect of Years of Legions over time.

Years of Legions is out now across most online stores.