Whichever angle you come at Feather and Flame, the new album from UK quartet Headsticks, it is a seriously rousing incitement. Offering eleven diverse and eventful slices bred in the band’s fusion of folk and punk rock, the release gets the body bouncing, thoughts sparking, and the spirit racing. The breeding of serious pleasure is not low on successes triggered either as Feather and Flame not only reinforces the reputation already earned by the band but confirms Headsticks as one of Britain’s most irresistible and essential punk ‘n’ roll adventures.

Formed late 2012 by former members of bands like Tower Struck Down, Jugopunch, and The Clay Faces, the Stoke on Trent hailing Headsticks quickly whipped up potent interest in their sound with a debut three-track E.P in 2013. Their live presence was just as rapid in stirring up of support and fans, the band over time playing shows across the UK as well as numerous festivals whilst sharing stages with a host of well-regarded names in both the folk and punk/alternative genres. The summer of 2014 saw the release of first album Muster, a proposition highly acclaimed by fan and media alike and again backed by the band’s persistent live hunger. Now it is Feather and Flame seriously stirring up ears and attention with its socially and politically charged and challenging songs fuelled by a delicious diversity of sound and dramatic adventure.

The album hits the ground running from its first second, jangling chords and beef rhythms grabbing ears as opener What Do You Want leaps into view. Vocalist Andrew Tranter quickly has the imagination hooked as he lyrically opens up an insight into the lives of the working man and the importance of and habit for things that possibly warrant neither. It is a provocative and swiftly contagious encounter, at times a thumping canter of sound and energy with moments of sweltering funk spice which only adds to its virulent drama. 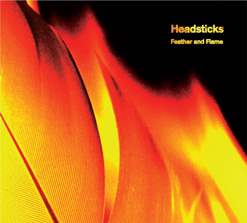 The thrilling anthemic start gets swiftly matched by the evocatively aired Cold Grey English Skies. Here the rhythms of bassist Nick Bayes and drummer Tom Carter hold a touch more reserve in their framing of a similarly reined urgency shared by Steven Dunn’s guitar, but all easily cast a catchiness which has hips swaying to their movement and the descriptive prowess of Tranter. With a gloriously melodic and addictive chorus, the song has a rich hint of Flogging Molly meets Violent Femmes meets Fatima Mansions to it, further flavouring to seduce ears and appetite before Go Move Shift uncages its own individual virulence. Straight away the song infuses country-esque revelry to its quickly tenacious folk honed rock ‘n’ roll, this time around thoughts picking out Midnight Oil as a hint to the hues working away within another forcibly persuasive track. The flavouring is just another example of the great variety within the album already showing its bold face across the first trio of treats.

The excellent Old Folk Songs has feet and voice soon involved with its punchy mix of folk and punk; a blending of sound around honest appraisal in some ways carrying a scent of Paranoid Visions to it whilst its successor Foxford Town brings a Pogues like lilt to its just as inescapable infectiousness and enthralling drama. Again an array of rock strains collude to create an emotive weave of sound around similarly nurtured syllables and once more Headsticks sculpt a chorus which demands eager participation. Tranter’s harmonica charms bring further colour to the proposal as they do in the traditional folk seeded Mississippi’s Burning where, as you might expect, bodies are induced to bounce and voices inspired to call out along with the band’s rousing croon.

Pay the Price matches it in persuasion and core sound, and subsequently success whilst Tomorrow’s History offers a more rugged affair with its anthemic arousal. The first of the two is an easy coaxing with its successor adding more boisterous attitude and energy to a shared quality of temptation, it bringing a tinge of bands like The Tossers into play before the compelling Every Single Day flirts with fifties rock ‘n’ roll for its power pop/folk punk romp. All three tracks leave the breath short and an appetite for more, greedier; that want more than fed by the outstanding Burn the Sun which follows. Creating a shuffle soaked in sultry seventies funk devilry and seventies new wave devilry, the track swings and flirts like a unique mix of King Trigger and New Model Army.

The album closes with the acoustic tempting and open heart of Falling Out of Love Song, a final folk caress to hungrily embrace before pressing play on Feather and Flame all over again. The album has that addictive quality, one listen leads to another or more almost every time whilst Headsticks is a band for punks, folksters, and rock ‘n’ rollers alike; for anyone who likes being aroused and provoked in equal measure by music that just gets under the skin.

Feather and Flame is out now across most online stores and @ http://www.headsticks.co.uk/shop.html